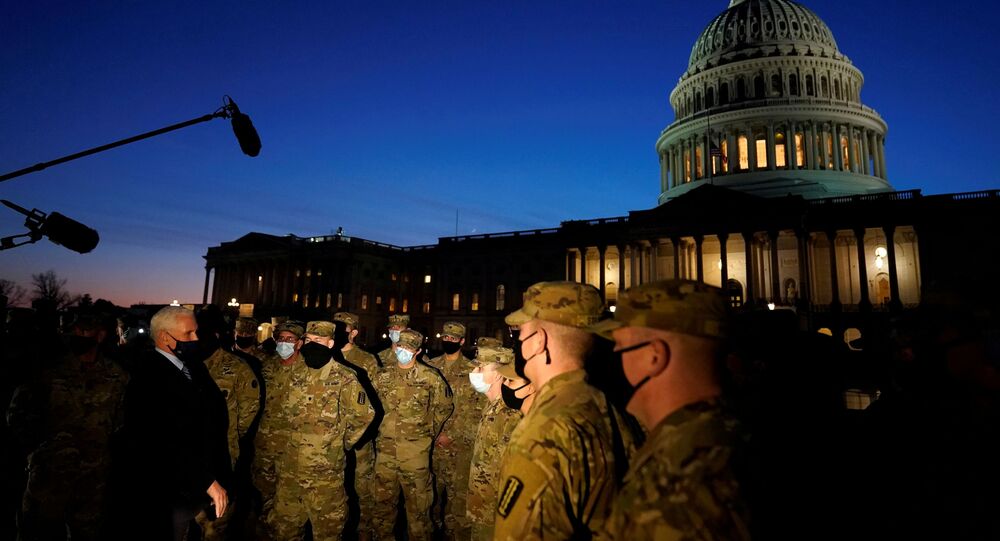 As President-elect Joe Biden is set to be inaugurated on 20 January next week, the United States capital remains on a high alert following the deadly 6 January Capitol Hill riot. Thousands of National Guard personnel have been deployed to aid local police in protecting the area.

A Virginia man who attempted to pass through a police checkpoint in downtown Washington DC on Friday using "unauthorised inaugural credentials" has been arrested by US Capitol law enforcement, CNN reported on Saturday.

Initially, CNN reported that the man's credentials were "fake", but then issued a correction, changing the word to "unauthorised".

The man, identified as Wesley Allen Beeler, was also reportedly in possession of a loaded handgun and over 500 rounds of ammunition, according to a police report and a law enforcement source speaking to CNN.

Around 6:30 p.m, Beeler reportedly arrived outside a police vehicle checkpoint in his pickup truck, at North Capitol and E Street NE, just north of the Capitol building, according to CNN, citing an unnamed source.

Following his arrest, the Washington Post reported that a judge ordered the suspect released from custody "on personal recognizance and issued a stay-away order from the District".

After his release, Beeler told The Post that he "has spent the last week working as hired security in downtown Washington". He said that his "non-government issued" credentials were given to him by his employer, MVP Protective Services.

Beeler's parents also told The Post that their son worked in private security and "had been reporting for work downtown through the past week".

The man also reportedly denied that he had 500 rounds of ammunition and that his gun was loaded.

​Beeler, from Front Royal, Virginia, showed officers at the checkpoint an unauthorized inauguration credential. According to the reports police inquired if Beeler was carrying any weapons, who then informed them of the Glock semi-automatic pistol he was carrying in the center armrest of his vehicle.

The handgun was reportedly loaded with 17 rounds of ammunition as well as a round positioned within the chamber, ready for use. According to an incident report provided by the Washington DC Metropolitan Police Department, law enforcement retrieved the pistol and 509 rounds of ammunition, shotgun shells, as well as an additional handgun magazine.

This comes as the capital is currently on high alert in the run-up to the 20 January inauguration of President-elect Joe Biden. Army Secretary Ryan McCarthy has authorized up 21,000 National Guard troops to be deployed from around the US to aid law enforcement with security.

“Right now, we have approximately 7,000 National Guard soldiers and airmen on the ground in support of the lead federal agency, and we are building to 21,000 for the upcoming inauguration”, said Army Gen. Daniel Hokanson, chief of the National Guard Bureau during an inauguration security briefing with Vice President Mike Pence.

The US Department of Defense at the same time on Friday issued a press release saying that they had given permission for an additional 25,000 "service members to support the Presidential Inauguration National Special Security Event federal law enforcement mission and security preparations, as led by the US Secret Service".

​On 12 January, National Guard personnel were permitted to be armed and were also authorized for the use of deadly force in their support of US Capitol Police in their protection of the Capitol on 20 January, lawmakers, and staff, a bureau media release confirms.

This follows the violent 6 January storming of the Capitol building by supporters of President Trump that saw five people killed in a failed attempt to overturn the November election result and to stop Congress from formally confirming the Electoral College vote certifying Joe Biden as the new US president.