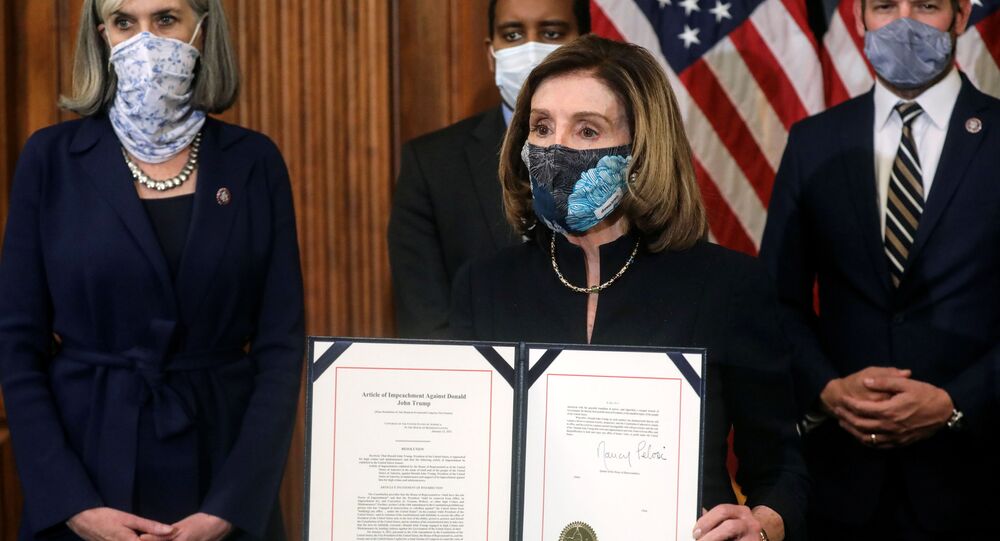 US President Donald Trump was impeached by the House of Representatives on 13 January for the second time during his four-year term in the office, making him the only US president in history to be indicted twice.

In a tweet he posted on 14 January, he said the impeachment "only further divides our nation", while in a lengthy Facebook post he lauded Trump's alleged accomplishments such as "lower taxes, a strong economy, and low unemployment".

Shame, shame on the ten Republicans who joined with @SpeakerPelosi & the House Democrats in impeaching President Trump yesterday. After all that he has done for our country, you would turn your back & betray him so quickly? What was done yesterday only further divides our nation.

​"And these ten, from his own party, joined in the feeding frenzy," he wrote, referring to the GOP members who supported the impeachment. "It makes you wonder what the thirty pieces of silver were that Speaker Pelosi promised for this betrayal."

Despite adding that Trump is not a "perfect person," many Facebook users didn't enjoy Graham drawing parallels between POTUS and Jesus, who Judas Iscariot betrayed for silver in the Bible.

"How dare you compare Donald Trump, the AUTOCRAT, HITLER REINCARNATED, to JESUS," wrote one. "DONALD TRUMP, THE MAN WHO STOOD BEFORE THE PEOPLE AND CALLED HIMSELF THE CHOSEN ONE. Trump wants ABSOLUTE POWER and CONTROL over the PEOPLE!"

"They are heroes. The Republican party has sold its soul to the devil named Donald Trump," added another.

"Who are you to cast shame on others? There is a plank in your eye," remarked someone else.

There was also no shortage of Twitter users who lambasted Graham for posting his thoughts as well.

I’m a lifelong Republican, but you’re on the wrong side of this one.

Master Trump must be so proud that you have placed him higher than the Jesus you feign to serve.

Trump facing consequences for his actions does not "further divide" our nation.

On 13 January, the US House of Representatives voted 232 to 197 in favour of impeaching Trump, making him the only US president to get impeached twice.

The vote was held in the wake of the violent events that transpired at the US Capitol on 6 January, when POTUS' supporters stormed the building and disrupted a US Congress session to officially count the votes cast by the Electoral College to certify Joe Biden's election win.

Trump himself, however, has denied responsibility for the storming of the Capitol, delivering a statement warning against any brutality in the days leading up to Biden's inauguration.