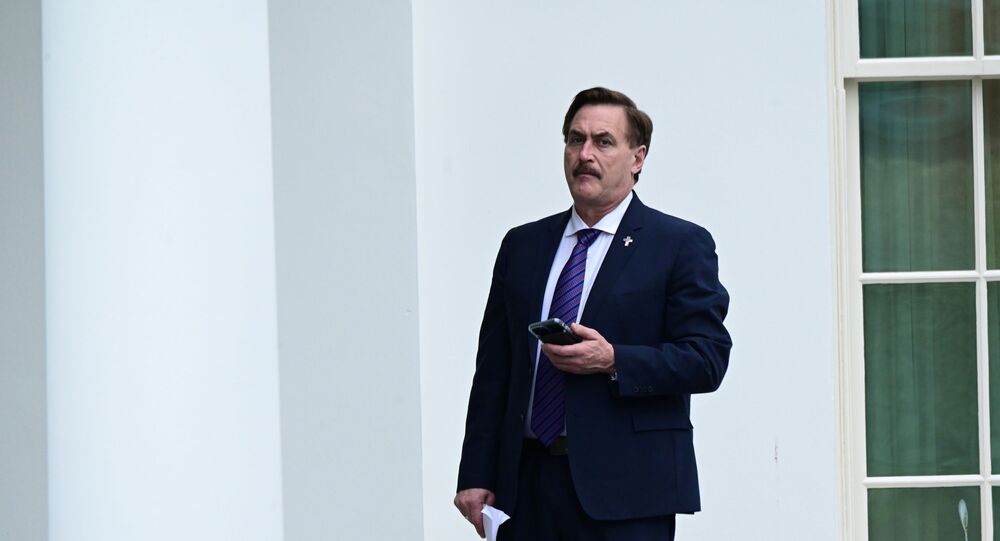 There has been much speculation as to what moves President Trump will make next as he continues to resist the outcome of the November 2020 election. Now, opponents fear that a series of candid photos of one loyalist at the White House may offer some clues.

Mike Lindell, the CEO of pillow manufacturer MyPillow and a long-time ally of President Donald Trump, was photographed entering the White House with a handful of notes which appeared to call for the imposition of martial law in the United States.

Mr Lindell has been one of the most ardent advocates of the President Trump’s theory that the election was rigged in favour of his Democrat Party opponent, Joseph R. Biden. Via his Facebook page on Friday, Mr Lindell called upon Trump supporters to “keep the faith” adding “we will have our president Donald Trump 4 more years!”

Then, later on, a photographer for the Washington Post caught images of Mr Lindell as he left from a meeting with President Trump in the White House on Friday, January 15. In the photos, there are readable notes being carried by Lindell, which included the sentences, “Insurrection Act now as a result of the assault on the …” and “martial law if necessary” and “Move Kash Patel to CIA Acting.” The document also appears to mention the phrase “martial law,” saying, “… martial law if necessary upon the first hint of any …”

The development regarding Mr Patel comes hot on the heels of revelations by Axios that incumbent CIA Director, Gina Haspel, threatened to resign from her post in early December after discovering that President Trump was planning to install Patel as her deputy. Reportedly, only “last minute inventions” from Vice President Pence and others were able too prevent the CIA chief from abandoning her position.

While the details of Mr Lindell’s meeting with President Trump remain shrouded in mystery, a report by the Washington Examiner quotes the CEO as saying that he met with Trump and an attorney for approximately 10 minutes in the Oval Office. Mr Trump reportedly read the document that Mr Lindell was photographed carrying and then passed it back to him. Mr Lindell however denied that he had written “martial law” on the document, and said that “I didn’t write that. That was an attorney. I was just a messenger. And I just delivered that.” However, according to a report by the New York Times, an administration official claimed that the notes “definitely referenced martial law.”

Other confidantes of President Trump have in the passed floated the idea of imposing martial law in the event that he suffer a defeat at the hands of Biden, including 2016 presidential campaign adviser Roger Stone and former National Security Advisor Michal Flynn.

CNN’s top White House correspondent, Jim Acosta, claimed in a tweet to have spoken to Mr Lindell about the notes. According to Acosta, while Lindell admits to having met with President Trump on Friday, January 15, he “also claimed the phrase ‘martial law’ do not appear on the document despite photos.”

Pool reporters monitoring Mr Lindell’s movements are widely quoted as saying that he entered the West Wing 3:05 p.m. on Friday January 15. Upon his exit, he refused to answer questions other than to reportedly say, “I’m sure you’ll write something nice.”