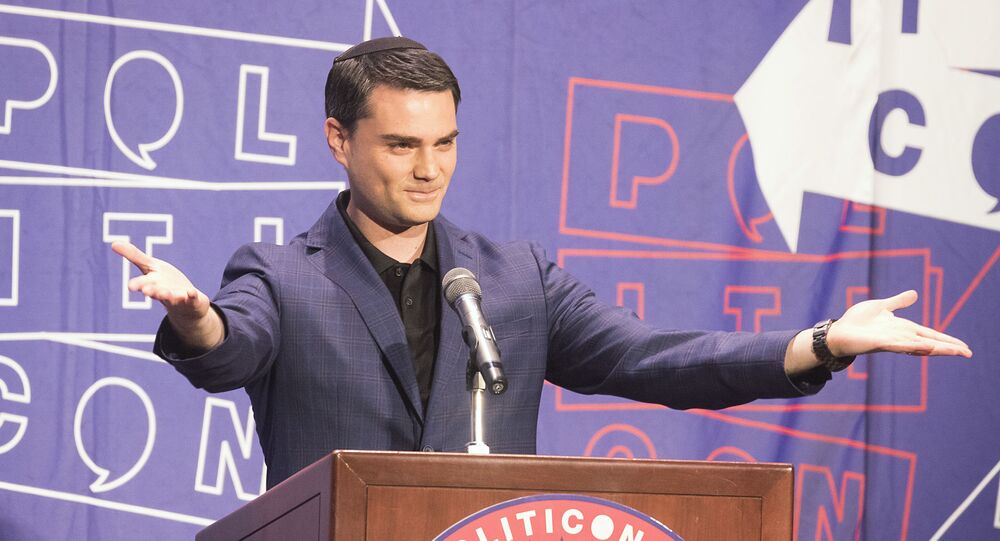 Ben Shapiro Says ‘Social Fabric is Torn', Hope of US ‘Coming Together’ Post-Trump is a ‘Pipe-Dream’

Conservative media figure Ben Shapiro guest wrote Politico’s Playbook newsletter on 14 January to focus on the controversy around the House’s impeachment of President Donald Trump for the second time in just over a year and the forces driving the move.

Daily Wire's conservative host Ben Shapiro has defended the House Republicans who opposed impeaching President Donald Trump over his perceived role in inciting the riot that engulfed the US Capitol on 6 January.

The Republican Party’s (GOP) opposition to impeachment is rooted in a “deep and abiding conservative belief that members of the opposing political tribe want their destruction, not simply to punish Trump for his behaviour,” claimed Shapiro in a guest letter penned for POLITICO’s Playbook newsletter.

The political commentator, who hosts The Ben Shapiro Show, referred to the impeachment on 13 January, when the House of Representatives voted 232 to 197 to impeach Trump a second time, with 10 Republicans breaking ranks to side with Democrats, as a foregone conclusion.

He then addressed the media speculations that followed, when some seemed ‘bewildered’ that not all House Republicans unanimously supported the impeachment.

There had been Republicans in the building when rioters broke through, as Congress had convened to certify President-elect Joe Biden’s win in the 2020 election, and Shapiro cited Republican sources as acknowledging that opposition to impeachment was not based upon a generalised GOP ‘sanguinity’ regarding Donald Trump’s actions and statements.

“Republicans believe that Democrats and the overwhelmingly liberal media see impeachment as an attempt to cudgel them collectively by lumping them in with the Capitol rioters thanks to their support for Trump… The evidence for that position isn’t difficult to find”.

The Daily Wire editor-in-chief denounced the vitriol that ‘74 million people who voted’ for Donald Trump are subjected to.

“It doesn’t matter whether you held your nose when voting for Trump; it doesn’t matter if you denounced his prevarications about a ‘stolen’ election… If you supported Trump in any way, you were at least partially culpable,” railed Shapiro.

The conservative commentator believes that this stance might further serve as the ‘basis for repression everywhere from social media to employment’, as he cited as an example the fact that Parler, the social media competitor to Twitter, was taken off the internet entirely by Amazon Web Services.

Shapiro wrote that the deplatforming of Parler, in the eyes of Conservatives, was perceived as political retaliation, particularly bearing in mind the double standards approach, evidenced by social media’s decision to downgrade the New York Post’s coverage of the Hunter Biden scandal in the month leading up to the election.

Ben Shapiro also drew parallels between the blame card played currently against Trump in the wake of the riots and the widespread civil unrest, spearheaded by Black Lives Matter over the summer, when Democrats ‘winked and nodded — and sometimes more’ in response to the violence.

Now, he writes, corporations like AT&T, Marriott, Dow and Airbnb are declaring they will cease contributing politically to Republicans who ‘challenged the electors’.

© REUTERS / SHANNON STAPLETON
Pro-Trump protesters clash with police at a rally to contest the certification of the 2020 US presidential election results by the US Congress, at the US Capitol Building in Washington, US, January 6, 2021

In conclusion, acknowledging that Republicans may be divided over impeachment, as the ten GOP members that sided with Democrats on the House vote seems to suggest, Ben Shapiro dashes the hopes of anyone expecting Americans to ‘come together’ during the dawning post-Trump era.

Warning that its no more than a ‘pipe-dream’, Shapiro says:

“Our social fabric is torn. It was torn before Trump. And, as it turns out, the incentive structure of modern politics and media cuts directly against stitching it together again.”

Jennifer Rubin, an opinion writer for The Washington Post, slammed ‘irresponsible’ Politico for opting to ‘give its pages to someone who fuelled the very lies that led to a violent overthrow.’

Mindboggling irresp for Politico to give its pages to someone who fueled the very lies that led to a violent overthrow. They put him back to repeat the same. Where is Politico's decency, concern for our democracy and adherence to truth? Oh. It's just about clicks. cc: @samstein

​In response, Shapiro went on Twitter to suggest that ‘people losing their s***’ over his writing were only proving his point.

People losing their s*** over me writing @politico Playbook this morning are pretty much proving my point. So keep at it guys, you're doing great! https://t.co/JQ7qjHV16u