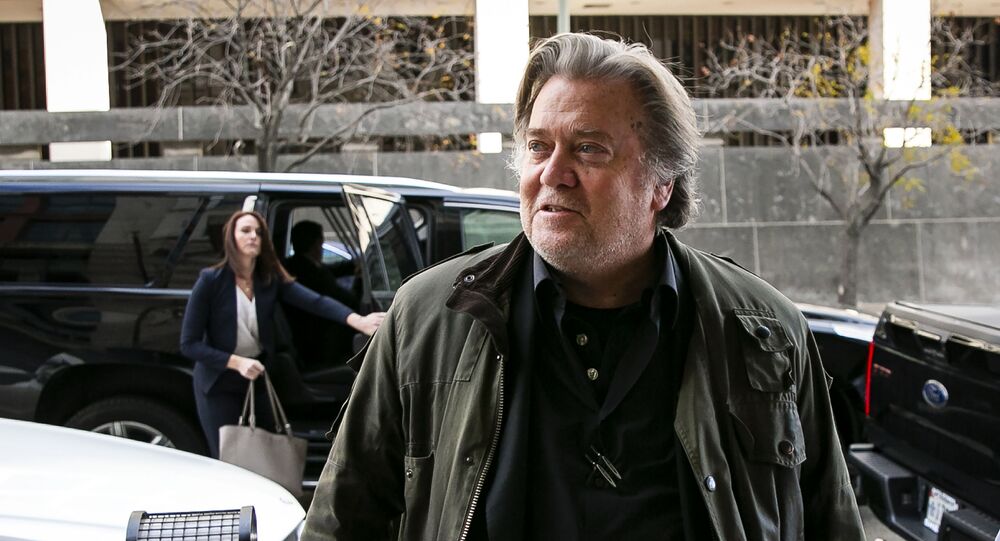 Steve Bannon, who worked as chief White House strategist and senior counselor to the president from January to August 2017, faces criminal charges for money laundering in connection with building portions of the US-Mexico border wall - to which he pleaded not guilty.

The outgoing US president, Donald Trump, reportedly reached out to former chief strategist Steve Bannon for the latter's advice regarding his election defeat, Bloomberg reported, citing people familiar with the matter.

According to the sources, Trump is now in search of allies "who would tell him what he wants to hear" as he continues to challenge the outcome of 2020 presidential election, continuously claiming that "massive election fraud" took place.

Bannon has reportedly sought a presidential pardon in his return to Trump's good graces, following his departure from the White House in August 2017 after accusations that he is a "symbol of white nationalism" who "energized that sentiment" through his position.

The accusations were prompted by Trump's reaction to the Unite the Right rally in Charlottesville, when he, as The New York Times put it, became "the only national political figure to spread blame for the 'hatred, bigotry and violence' that resulted in the death of one person to 'many sides'". The advice not to criticise violent right-wing rally participants reportedly came from Bannon.

In November 2020, the former strategist, was permanently banned from Twitter. The suspension of his account followed Bannon's remarks in his podcast "War Room", in which he suggested that the director of the National Institute of Allergy and Infectious Diseases, Anthony Fauci, and FBI Director Christopher Wray should be beheaded.

© REUTERS / KEVIN LAMARQUE
'Death by Thousand Cuts': Trump Reportedly 'Angry', 'Isolated' Over Lack of Defense Amid Second Impeachment
Trump was banned from Twitter for what is seen by many as his "incitement to insurrection" violence in the deadly 6 January US Capitol attack by his supporters, which saw five people killed. Trump dismissed the accusations of "inciting insurrection", for which he was impeached a second time on Wednesday, insisting that he never wanted violence on US streets.

According to reports, Trump's inner circle is "shrinking" as calls emerge for him to resign after the deadly Capitol riot. His impeachment was backed by 10 Republicans in the House of Representatives who joined with the Democratic bloc, while the number of his loyalists is reportedly dramatically decreasing.