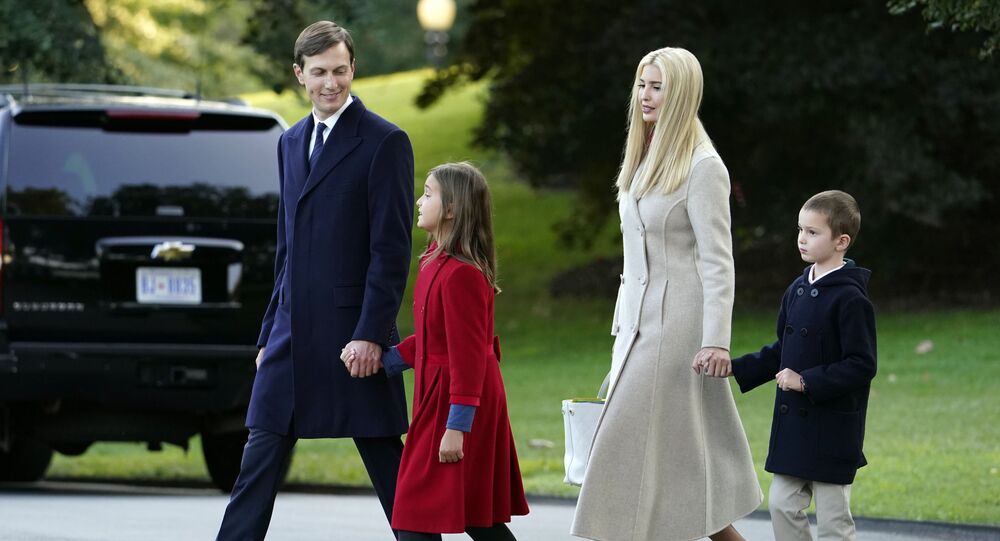 A recent real estate purchase has signaled that Ivanka Trump, adviser to US President Donald Trump, and senior presidential adviser Jared Kushner may soon move from their $15,000-per-month rental home in the Kalorama neighborhood of Washington, DC, and head to Florida, where 45 has his primary, non-governmental residence.

Citing neighbors and law enforcement officials, The Washington Post reported Thursday that, since September 2017, Kushner and Trump have spent more than $100,000 in taxpayers funds on a studio basement rental that primarily served as the on-the-job restroom for their assigned Secret Service detail.

According to said law enforcement officials, the married couple - who have three children - barred Secret Service agents from using any of the 6.5 bathrooms in their Kalorama rental home and initially purchased portable restrooms, or port-a-potty units, for the agents.

Naturally, the porta-a-potties did not go over well with the atmosphere of the neighborhood and quickly brought displeasure from their new neighbors.

“They sort of came in with the attitude, like, ‘We are royalty,’” Dianne Bruce, a former neighbor who lived across the street, told The Post. “When they put the porta-potty right outside on the sidewalk we weren’t allowed to walk on, that was when people in the neighborhood said, ‘That’s really not acceptable.’”

Before Kushner and Trump decided on the $3,000-a-month studio basement, agents were forced to use bathrooms in the nearby home of President Barack Obama, a "not-so-nearby" house belonging to Mike Pence and various businesses around the area.

General Services Administration records viewed by the outlet note that the lease of the 820-square-foot basement began on September 27, 2017 and is set to expire on September 26 of this year. At the end of agreement, some $144,000 in taxpayer funds will have been spent on the unit.

The home in question belongs to Kay Kendall, chairwoman of the DC Commission on the Arts and Humanities, and was fully rented out to former Connecticut congressman Anthony “Toby” Moffett Jr. That is, until the former lawmaker suggested that Kendall split the home into two units and, of course, offer him a reduced rental price.

“I think it was very clear that they just needed a place to take a shower, take a break, use the facilities, have lunch,” Kendall explained, speaking of the Secret Service detail.

“It’s been no big deal,” Moffett said of the experience. “They have been very nice to our grandchildren.”

As their neighbors talk to the press, Kushner and Trump seem to be making their own plans to leave Kalorama after the end of Trump's presidency later this month.

Someone just sent me this photo of moving trucks at Jared and Ivanka's house. pic.twitter.com/fll6OiiBHX

Sputnik reported last month that the married couple were reportedly in talks to close a $31.8 million real estate purchase on a waterfront plot on "Billionaire Bunker," a swanky, high-security island enclave off the coast of Miami, Florida.

If the exclusive island enclave does become their new residence, Kushner and Trump would become neighbors to the likes of billionaire Eddie Lampert, the former CEO and chairman of Sears Holdings; Hotels.com co-founder Bob Diener; and businessman Carl Icahn, who presently owns the once-bankrupt Trump Entertainment Resorts.

Furthermore, considering the 1.8-acre lot is an empty waterfront plot, Kushner and Trump would have to find interim lodging while the new home is constructed.