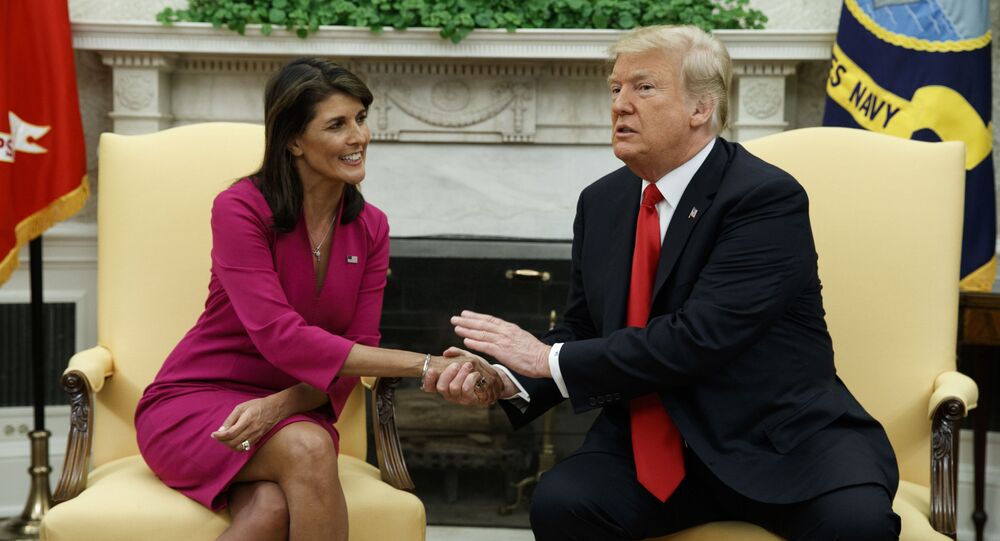 While former US Ambassador to the United Nations Nikki Haley has reportedly slammed US President Donald Trump's post-election remarks behind closed doors, she has publicly come to 45's defense regarding Twitter's decision to ban him from the platform, calling the move something that "happens in China, not our country."

Haley fueled rumors of a possible 2024 presidential bid on Wednesday after issuing supporters an email announcement about her new political action committee (PAC), dubbed "Stand for America" - the same name as her 501(c)(4) issue advocacy group.

"When I sat in the Oval Office before my last press conference as UN Ambassador, I made a promise to keep standing for America," the 48-year-old wrote. "I renewed that promise last fall at the Republican National Convention."

"I am not done, not by a long shot," Haley emphasized.

Why did I just get this email from @NikkiHaley

Is this her announcement for 2024? pic.twitter.com/o4Mx9N5TaX

Rumors of Haley's potential campaign for the Republican presidential nomination in 2024 have continued to spread, and the former ambassador recently defended the US president regarding his ban from Twitter.

Silencing people, not to mention the President of the US, is what happens in China not our country. #Unbelievable

At the same time, Politico reported last week that Haley privately rebuked the US president's conduct ahead of the deadly riots and storming of the Capitol building in Washington, DC, on January 6.

“President Trump has not always chosen the right words,” Haley reportedly said on January 7 during a closed-door event at the RNC’s winter meeting in Florida, according to a source Politico said was "familiar" with her comments. "He was wrong with his words in Charlottesville, and I told him so at the time. He was badly wrong with his words yesterday. And it wasn’t just his words. His actions since Election Day will be judged harshly by history."

The reports of the private condemnation have sparked conversations about Haley possibly setting herself up to possibly take on Trump for the Republican nomination in the 2024 presidential election.

However, Haley's email shied away from mentioning the 2024 presidential race. It was also free of any mention of the US president.

Instead, the former US ambassador's Stand for America PAC will be “laser-focused on the 2022 midterms and electing a conservative force to the House of Representatives and US Senate to serve as a bulwark against the liberal agendas of Joe Biden, Kamala Harris, Chuck Schumer and Nancy Pelosi," the email said, according to The Hill.

Haley went on to invite supporters to assist with "recruiting, advising, training, and financially supporting strong conservatives to run in key House and Senate races to take back control of both [legislative] chambers."

SFA PAC is sending out emails from Nikki Haley during the impeachment seeking donations for the 2022 elections. Using this moment to rile up their base. pic.twitter.com/tlsT1yOHi4

​She also called on GOP allies to defend Republican incumbents "who are being targeted for defeat" - particularly those who are first-time officeholders and/or live in swing-states.

"Sitting on the sidelines and waiting to get involved is akin to doing nothing at all," Haley argued. "And given the stakes, that's not an option for us."

Following the two Democratic victories in Georgia's Senate runoff races, Democrats will soon hold control of the US House of Representatives and the Senate. While both parties have 50 lawmakers in the Senate, the tie-breaking vote will be given to Vice President-elect Kamala Harris, a Democrat.

Chaney Denton, a spokesperson for the former US ambassador, also shot down 2024 campaign rumors in relation to the Stand for America PAC.

“There’s nothing to read into that," the spokesperson told Axios. "Amb. Haley frequently and proudly mentions her work alongside President Trump in speeches and writings. The purpose of SFA PAC is to support Republicans in the 2022 midterm elections.”