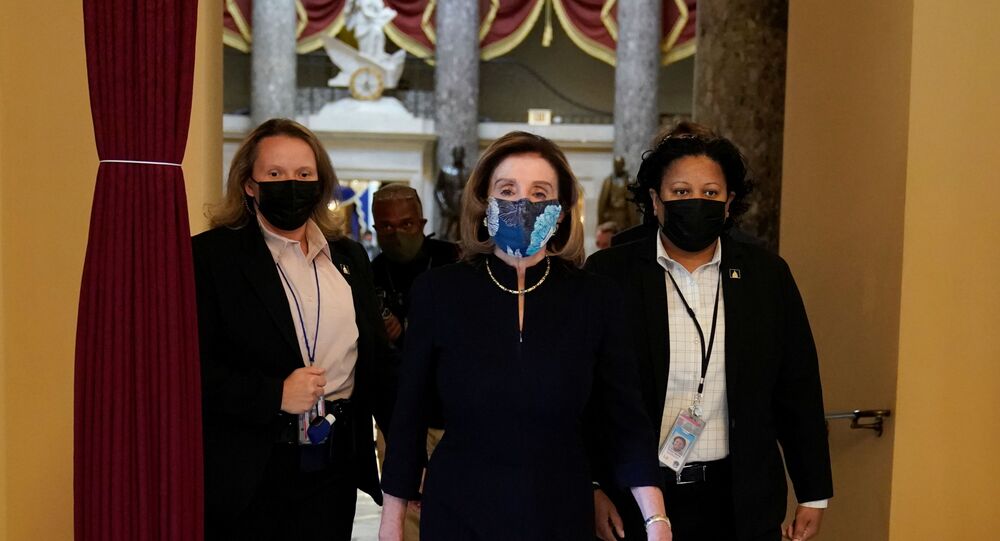 On 13 January, the US House of Representatives voted 232 to 197 in favour of impeaching - for the second time in one year - President Donald Trump, in the wake of the deadly Capitol Hill attack, over "incitement of insurrection". US political observers discussed the split within the GOP, and Trump's political future.

On Wednesday, the House impeached the US president for a second time. In stark contrast to the December 2019 impeachment vote, which divided the lower chamber along party lines, this time 10 Republican representatives joined their Democrat peers. The move prompted a backlash from some GOP lawmakers: Rep. Jim Jordan (R-Ohio) called to expel Rep. Liz Cheney (R-Wyo.) from Republican House leadership for her endorsement of the anti-Trump move.

Why Did Ten GOP Representatives Vote With Dems to Impeach?

Those who voted for impeaching Trump were worried that there could be more violence unless they took a more direct stance, suggests John A. Tures, professor of political science at LaGrange College, adding that lawmakers are deeply concerned, "because America has never had anything like that".

Although Trump supporters "are going to be angered by the vote", the academic believes that "it'll be good for the country, because something has to be done so that this can never happen again".

Tures insists that House Democrats were right to fast-track impeachment: "It would have been more damaging, more firm if Democrats had said ‘well, let's just wait out the next two weeks’ and have not taken an active stance", he said, adding, "I think that would have emboldened those who want to overthrow the existing government or the existing power structure".

It is hardly surprising that some Republicans voted to charge Trump with "incitement of insurrection", Tures notes, suggesting that many more GOP representatives supported the second impeachment but were "afraid of what might happen if they vote for it".

"A lot of the members of the Republican Party were pretty scared", the academic presumed. "I think they were intimidated by protesters; those protesters who are probably more likely to come from their districts".

Dr. Nicholas Waddy, associate professor of history at SUNY Alfred, opines that the second impeachment was illegitimate, ill-advised, rushed, and inappropriate, suggesting that Trump did not call for his supporters to attack the Capitol and that the unrest could be partially blamed on a lack of adequate security at the Capitol. The 10 Republicans out of the 211 in the House voted to impeach Trump, a disappointment for the academic.

"But I'm not too surprised because I think there's a certain level of exhaustion with President Trump", he offers. "And of course, the mob that attacked the Capitol was a threat to the congressmen themselves. So to be honest, if there's any surprise in the situation it is that more Republicans didn't vote to impeach President Trump".

Mike Felton, a Republican and a Trump supporter, suggests that the outcome of the House impeachment vote indicates that "there's only one party left in the United States," adding, "There is not a Republican and a Democratic party, they're both different wings of the same bird", he says, denying accusations that Trump "incited violence" during the latter's 6 January rally on the White House lawn preceding the violent attack.

"There are no credible grounds on which to impeach Trump", believes Zachary Finder, a conservative veteran and grassroots activist. "According to CNN, investigators believe the Capitol riot was planned and not inspired by President Donald Trump. But Democrats impeached before they had any information from investigators".

According to Waddy, the GOP is turning its back on the president due to a strong element among the party and among Republican lawmakers who would like to see Trump disappear.

If the Senate approves the House impeachment, Trump would not be able to throw his hat in the ring in 2024 but "much of the Republican Party would probably be relieved if he couldn't run again, regardless of the rights and wrongs of this particular charge", the professor says.

On impeachment, @SenGillibrand: "Mitch has refused to call everyone back in until the 19th, and so he I think will leave the impeachment trial to Sen. Schumer. We are obligated under the Constitution to actually conduct a trial..." (1/3) #AMRstaff

​Earlier, Senate Majority Leader Mitch McConnell rejected Democratic calls to bring the impeachment vote to the Senate floor, immediately signalling that the chamber would not return until 19 January, 2021. "There is simply no chance that a fair or serious trial could conclude before President-elect Biden is sworn in next week", McConnell said in a statement on the heels of the House vote to impeach. Lawyers argue that after Trump leaves the Oval Office, the US Senate will not continue the impeachment.

What Role Will Trump Play in GOP After He Steps Down?

No matter whether the Senate impeaches the president, Trump has already lost most of his support, believes Tures.

"In the end, when Trump leaves the stage, he's already lost a lot of support", he says. "I looked at a poll from 6 January 2020, a year ago, and 90% of Republicans said that they approved of Trump. Now in polls today, it's said: well, he would win the nomination. He has 40% support. But that's a huge loss of power".

Waddy forecast that "Trump will be important in the future of the party, and he's very popular still with Republican rank and with voters".

The academic warns that "anyone who votes to impeach him or convict him, or publicly opposes him, is going to face a reckoning with ordinary Republicans", adding, "I think it will be hard for anyone who opposes Trump to prosper in the Republican Party".

If Democrats cannot jail Trump, Waddy suggests that it will be "it's pretty hard to imagine that Republicans would stop listening to him if he did, or that the media would stop reporting on it".

"I think if [Trump] wants to be an important voice in the future of the country and the future of the party, he will be", the professor says. "He proved in 2016 that all these establishment candidates can rant and rave about it, but he's a hard man to beat, he's a formidable figure. He's very popular with millions of Americans".

The Republican Party is done, argues Felton, "I don't see a Republican party around it by the time the next election comes for president, four years from now", he presumes. "They will be wiped out, because they lost their support".

"There's going to be a third party soon", he promoted, stating, "We're already trying to start what they call the American Party, which is where most of us Trump supporters are going to. None of us agree with the Republicans".

"Moving forward, both political parties that decide not to embrace populism will lose support," suggests Andrew B. Raupp, a Republican conservative commentator, founder and executive director of STEM.org. "The future of the Democratic Party was Bernie Sanders and Nina Turner, indicative of the generational gap between those younger voters who sided with Senator Sanders and the older ones who picked Hillary Clinton in 2016 and Joe Biden in 2020. The same can be applied to the Republican Party. In 2016, voters sided with the 'political outsider' candidate in Donald Trump, opposed to the 'political dynasty' candidate Jeb Bush".