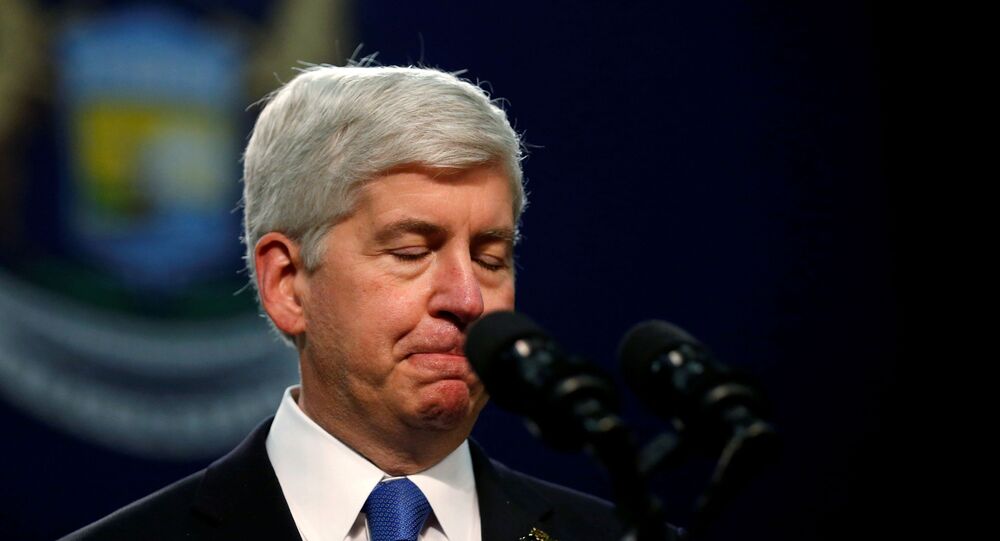 A previous investigation into the Flint water crisis brought charges against several state officials in 2017; however, prosecutors eventually dropped the charges in 2019 when it was determined that the initial probe was mishandled. A new investigation was subsequently initiated.

Former Michigan Governor Rick Snyder, who was in office during the height of the Flint water scandal that led to a deadly outbreak of Legionnaires’ disease, was charged on Thursday with two misdemeanor counts of willful neglect of duty.

Snyder pleaded not guilty to both charges, and his bond was set at $10,000 for each count. While the former official was not ordered to hand over his passport, he was told he could not leave the Great Lakes State without permission from the court, according to Detroit News.

Echoing past remarks, Brian Lennon, Snyder’s lawyer, issued a statement following the development and noted that the two charges “are wholly without merit and this entire situation is puzzling.”

“Today’s charges do nothing to bring justice to the people of Flint,” Lennon continued. “These unjustified allegations do nothing to resolve a painful chapter in the history of our state. Today’s actions merely perpetrate an outrageous political persecution.”

Snyder’s next court appearance is scheduled for Tuesday.

The Associated Press reported that Snyder’s charges make him the first governor or former governor of Michigan to ever be charged for actions taken during his time in office.

Baird, who was in charge of the recovery efforts in Flint, was charged with perjury, extortion, misconduct in office and obstruction of justice. If convicted on all counts, Baird faces up to 45 years in prison and a fine of roughly $30,000. At present, it's unclear whether prison sentences for Baird's charges will be served concurrently.

The ex-aide has pleaded not guilty to all charges, with his lawyer, Randall Levine, reiterating that the allegations against his client are “baseless,” and that he is “being unfairly prosecuted by the state’s Democratic attorney general.”

As for Lyon and Wells, who were both previously charged under the state’s earlier investigation into the water crisis, the pair of ex-officials were each hit with nine counts of involuntary manslaughter over the Legionnaires’ disease outbreak that killed 12 people. Lyon was also hit with one count of willful neglect, whereas Wells was also charged with two counts of misconduct in office and one count of willful neglect of duty.

According to Detroit News, Peeler, while serving as the director of Michigan’s Maternal, Infant and Early Childhood Home Visiting program, allegedly “buried” an internal report from 2015 that included details on blood lead levels detected in children living within the majority-Black community of Flint.

In total, 42 counts related to the water crisis were issued, of which 34 were felony charges.

"There are no velvet ropes in our criminal justice system," Fadwa Hammoud, a special prosecutor with the state attorney general’s office, said at a conference. "Nobody, no matter how powerful and how well connected, is above accountability when they commit a crime."

Reports emerged earlier this week that charges would be forthcoming after several ex-officials were informed of prosecutors’ intentions.

The water crisis began in early 2014 when city officials decided to switch Flint’s water source from Lake Huron to the Flint River as a cost-saving measure while a regional pipeline was under construction; however, almost immediately, Flint residents noted something was off with the water, since it appeared cloudy and emitted a foul smell.

According to local station WDIV, despite complaints, significant action by the Snyder administration wasn’t taken until medical professionals reported spiked levels of lead in young children. It was ultimately determined the crisis was caused by a failure to apply corrosion inhibitors to the city’s water pipes when the source was changed.

© AP Photo / Paul Sancya
Teacher Cedric Cook pushes cases of water into Noble School in Detroit, Tuesday, Sept. 4, 2018. Some 50,000 Detroit public school students will start the school year Tuesday by drinking water from coolers, not fountains, after the discovery of elevated levels of lead or copper — the latest setback in a state already dealing with the consequences of contaminated tap water in Flint and other communities.

While the massive misstep exposed tens of thousands of Flint residents to toxic levels of lead, the water switch was also blamed for the Legionnaires’ disease outbreak that affected at least 90 individuals and killed 12.

The crisis, which saw thousands of residents lining up for bottled water, seeking medical assistance over lead-caused health complications, became the nationwide symbol for governmental mismanagement.

Reports surfaced in November that a proposed settlement of a lawsuit on behalf of the Flint residents had reached some $641 million. A preliminary approval of the settlement is expected to be issued by a court by January 21.