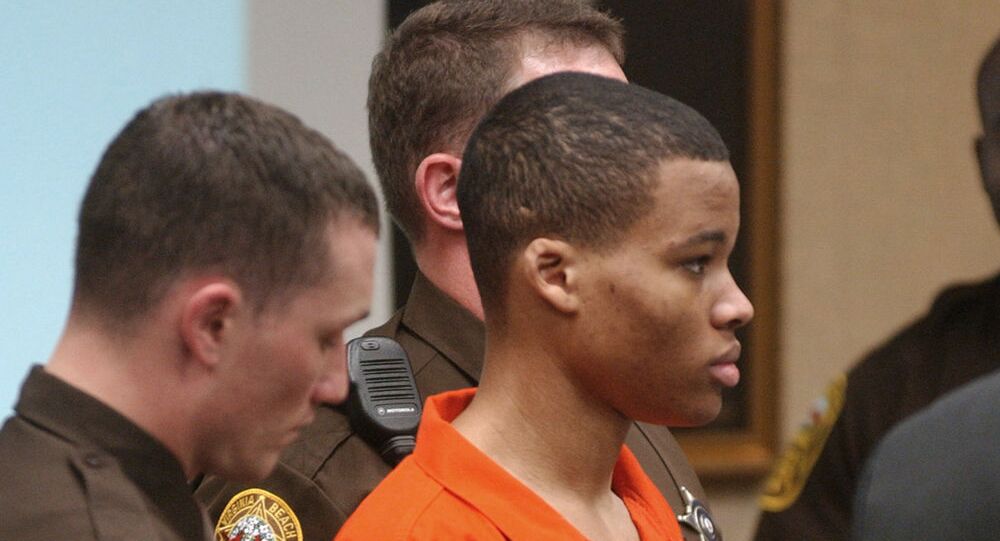 After 20 Years in Jail, Washington Sniper Has Married a Trust Fund Baby and Could Be Freed in 2022

Over a three-week period in 2002 the suburbs of Washington DC were terrorised by a sniper who killed 10 people and injured three others, including a 13-year-old boy. A massive manhunt was launched amid fears the killings were linked to Islamic terrorism.

The relatives of those who were killed in the Washington Sniper attacks in 2002 have been warned one of the two men convicted could be freed from prison as early as next year.

Lee Boyd Malvo, who was 117 days shy of his 18th birthday when he was arrested in October 2002, was jailed for life without the possibility of parole.

Malvo carried out most of the shootings, under the guidance of John Allen Muhammad, who was executed for his part in the spree in 2009, aged 48.

In 2017 the US Supreme Court ruled life sentences without parole were unconstitutional for juveniles and then, in February 2020, the state of Virginia passed a new law that people who had been under 18 when convicted could be considered for parole after serving 20 years of a life sentence.

In March last year Malvo, 35, got married to Sable Knapp, 30, the granddaughter of one of Iowa’s wealthiest property developers, Bill Knapp.

Knapp is an activist on a number of political issues and was arrested in 2016 for during a Black Lives Matter protest in Portland, Oregon.

Malvo married Knapp - who has described herself as a "trust fund baby" in a civil ceremony in Virginia’s Red Onion State Prison.

Knapp has advocated for equality and wealth redistribution and against injustice and racism.

Malvo was born in Jamaica and, according to the Monster: DC Sniper podcast,  suffered a great deal of abuse at the hands of his violent mother Una.

He met Muhammad in 1999 while living in Antigua and saw him as a father figure.

The pair moved to the United States in 2001 and Muhammad, a member of the Nation of Islam, began indoctrinating him and training him how to use a Bushmaster XM-15 sniper rifle.

In October 2002 they travelled from Tacoma, Washington to the east coast of the United States and began the spree of crimes which would make them both notorious.

Muhammad bought a blue Chevrolet Caprice car and made alterations to it which allowed a sniper to lie down in the trunk and fire the Bushmaster rifle through a tiny hole in the chassis without being seen by anyone.

© AP Photo / J. SCOTT APPLEWHITE
ATF officers at the scene of one of the Washington Sniper attacks in October 2002

On 2 October 2002 James Martin, 55, a program analyst at a federal agency, was shot and killed in the parking lot of a grocery store in Wheaton, just outside Washington DC.

The following day the sniper claimed another five lives. The victims were ordinary people mowing grass, filling up their cars with gasoline or reading a book on a bench.

For the next three weeks people living in the so-called Beltway area - the suburbs and dormitory towns around Washington DC - lived in fear of the sniper and there were wild theories that the killer was linked to al-Qaeda.

At one crime scene the sniper left a tarot card, with a message which began: "Dear Mr Policeman, I am God."

Later he would demand US$10 million be put into an account linked to a credit card.

But at 3.15am on 24 October 2002 Malvo and Muhammad were arrested as they slept in the Chevrolet Caprice at a rest stop off Interstate 70 in Maryland.

​It later became clear that not only had Malvo been the one pulling the trigger but the pair had also claimed the lives of several other people as far away as Tacoma and Alabama.

Although he was a Muslim, Muhammad had no connection with al-Qaeda or any other jihadist organisation and his motivation seemed to have simply been a mixture of greed and rage at US society, which had been triggered when he lost custody of his three children to his wife Mildred.

Supporters of Malvo claim he acted under coercion, has expressed genuine remorse and is not “permanently incorrigible.”

​One of Malvo’s own attorneys, Tom Walsh, told the Monster: DC Sniper podcast: "Any juvenile that…has served a period of 20 years incarceration is eligible - the key word there is eligible - for consideration for being released on parole. That doesn’t mean that they get released after 20 years…it just means that they are eligible to be considered for release on parole."

Even if he is granted parole in Virginia he could be extradited to Maryland or to Alabama, where he is believed to have killed Claudine Parker, a cashier at a liquor story in Montgomery.

David Reichenbaugh, a retired Maryland police lieutenant who wrote a book about the Washington Sniper case, told the same podcast: "I don’t know if he was ever properly diagnosed but as far as I’m concerned he was a psychopathic, cold-blooded killer that can never walk the street again."

He added: "I have arrested a lot of people but this is just one of those people that you just know just by looking at him…is not done killing, if he gets the chance."