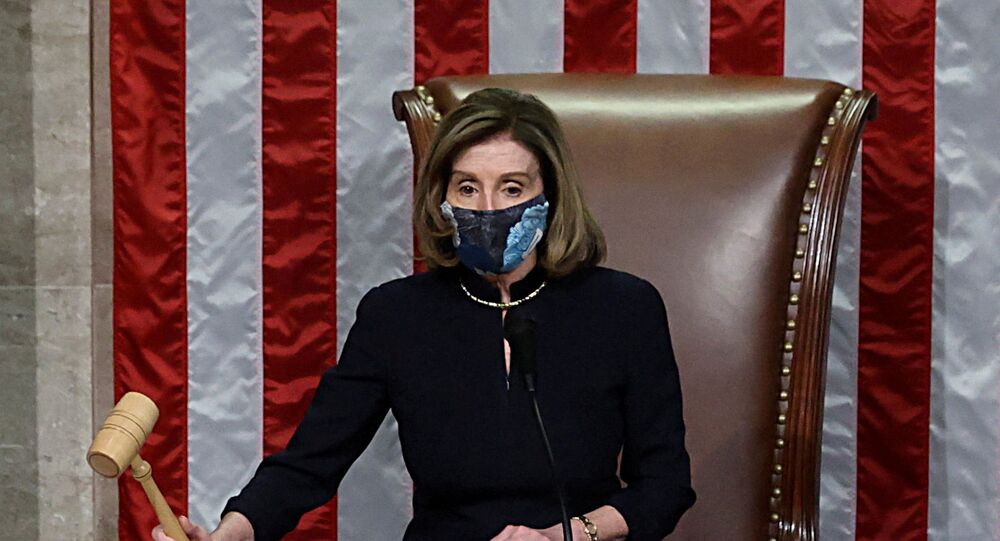 Amid the turmoil at the US Capitol following a deadly riot, fashion updates were noted. Democratic House Speaker Nancy Pelosi was spotted by journalists in the same outfit she wore for on 18 December, 2019, during Trump's first impeachment.

Speaker Pelosi wore an elegant deep blue dress accompanied by a stylish gold chain during the US House of Representatives vote for the second impeachment for the outgoing US president, Donald Trump.

The outfit is the same as the one in which Pelosi appeared in Trump's first impeachment debate on December 18, 2019, when the House voted to impeach the president for putting pressure on Ukrainian President Volodymyr Zelensky to initiate an investigation against Hunter Biden, the son of the then-Democratic presidential candidate, Joe Biden. At the time, Trump was impeached for two articles: "abuse of power" and "obstruction of Congress". Following Trump's first impeachment by the House, the US Senate voted to allow the president to remain in the White House.

An MSNBC tweet boosted outrage among some netizens, who complained that the reports are “inappropriate” amid uncertain times in US political life, pointing out, however, that Speaker Pelosi still looks gorgeous.

“So what?! It’s her lucky impeachment outfit and she looks fabulous!!!”

“What about the men? Please do check out their suit repetitions. With all that is going on in the world this is essential reporting.”

Nevertheless, other users noted that some have taken the post too seriously.

“I don’t think it was meant to be a fashion post, seriously you didn’t see the humor in it?”

“That outfit has been worn at half of all impeachments in US history.”

On 13 January, the US House of Representative voted to impeach Trump a second time, on “incitement of insurrection”, after accusations that the outgoing US president called on his supporters to storm the US capitol on 6 January, resulting in five deaths and widespread damage and vandalism. 232 legislators, including ten Republicans, voted to impeach Trump, as 197 voted against.