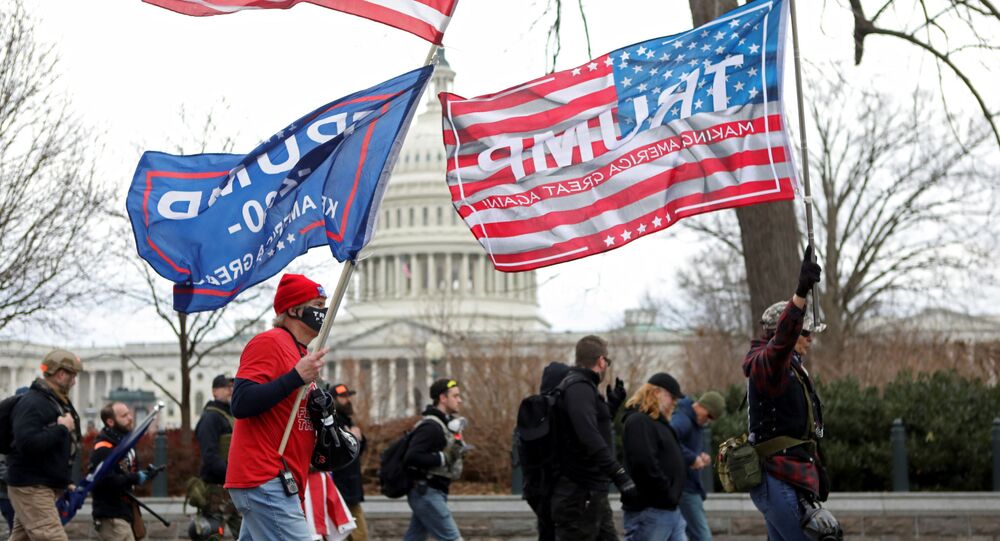 On 6 January, hundreds of Trump supporters stormed the US Capitol as members of Congress were certifying the results of the 2020 Electoral College vote. The deadly attack saw 5 killed as well as widespread damage and vandalism. The FBI is now investigating those who took part in what is now regarded as an insurrection.

Adam Newbold, 45, a retired US Navy SEAL special operations soldier, has been interrogated by the FBI after a video in which he shared his thoughts regarding the violent 6 January insurrection went viral, ABC News reported on Wednesday.

The video was posted in Facebook shortly after the uprising, and the media platform subsequently deleted it, but not before a copy was obtained by ABC News. Newbold in the video stated that he was “proud” of having taken part in the attack, but condemned the violence.

"There was destruction, breaching the Capitol, our building, our house. And, um, to get in you had to destroy doors and windows to get in. Maybe they just didn’t get the message. Unfortunately. I’m hoping the message was strong enough. But unfortunately, maybe it wasn’t. I hate to see this escalate more," Newbold said in video post.

He explained that he intention in taking part in the violent attacks was to make lawmakers "think twice about what they're doing" and be left "shaking in their shoes."

In an interview to ABC Newbold regretted his role in the deadly insurrection, and said that he is cooperating with the FBI.

"I would like to express to you just a cry for clemency, as you understand that my life now has been absolutely turned upside-down," he complained to ABC News, adding, "I am not a terrorist. I am not a traitor".

Before departing to Washington DC for the 6 January attack, he urged subscribers on his social media to refrain from violence and remain respectful, as he was “not going down looking for a fight” and noting that law-enforcement are not the “enemies”.

“There are good people on all sides of this thing," he stated in his now-deleted 5 January video post, adding that "we can no longer be quiet. The Silent Majority has been awakened and we need to stand up”.

Amid his new notoriety, Newbold posted a new 17-minute video on Facebook in which he claimed that he “absolutely didn’t go through the Capitol,” and does not feel guilty for being what he described as a “rough man”. He spoke of his anger and disappointment following the 2020 presidential race and asserted that a great part of Americans had not been heard. In addition, Newbold complained that others would not listen or see the things the way he saw them and "believe the things that he believes.”

“We simply felt that when the electoral slates are read and if they were denied, that would give Trump a path to still be the president. That things were going to erupt and we needed to be prepared to be safe and deal with it,” he stated.

Newbold described the 6 January White House rally by Trump that preceded the deadly Capitol attack as “so patriotic, so good in most aspects” but also noted that he saw “a lot of volatility, a lot of danger” as “factions of people trying to incite violence.”

“A lot of us believe the coup attempted happened and was successful…we believe it was the other side that committed the coup attempt,” he said, adding “I don’t agree with [...] some people were fighting with the cops".

Newbold in his new video post acknowledged that Biden is the new US president, but expressed frustration in the current political and social situation in the country, claiming that he “had no choice.”

Last week, a deadly mass protest in Washington DC that killed five people occurred as the certification of the Electoral College vote was being held. Trump supporters attacked the Capitol, breaking windows and doors, damaging and vandalizing offices, as well as beating a Capitol building security officer to death. After breaking into the building, the attackers interrupted the joint Congress session, which later was resumed. To date, the Justice Department has launched investigations against at least 170 identified participants, and 70 of them are being prosecuted.

FBI Memo: What's Behind Reports of Planned Armed Protests Ahead of Biden's Inauguration?