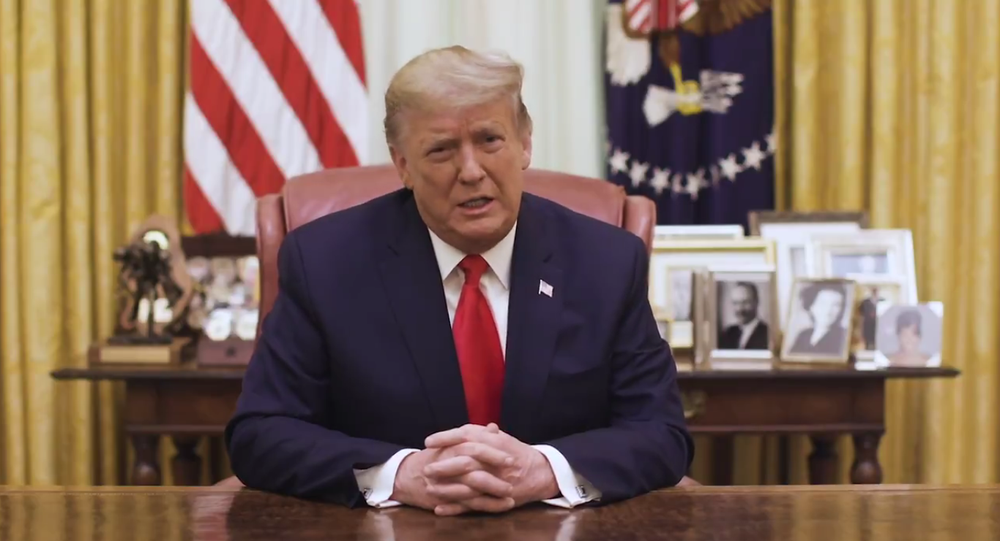 The FBI was reported earlier this week to have discovered plans by right-wing groups to hold "armed protests" in all 50 US states and the District of Columbia during the week of US President-elect Joe Biden's inauguration.

In a new video on Wednesday, US President Donald Trump denounced the violence by his supporters at the Capitol last week. His statement comes a day after a letter by Pentagon leaders reminding US servicemembers of their oaths and amid reports of further plots against the forthcoming inauguration of Biden.

"I want to be very clear: I unequivocally condemn the violence that we saw last week," Trump said in the video shared on the White House Twitter account due his own being taken down by the tech giant. "Violence and vandalism have absolutely no place in our country and no place in our movement. 'Making America Great Again' has always been about defending the rule of law, supporting the men and women of law enforcement and upholding our nation's most sacred traditions and values."

Trump noted there had been "too many mobs" over the last year, pointing the finger not only at his own right-wing supporters but also the left.

"There is never a justification for violence. No excuses, no exceptions. America is a nation of laws," Trump continued, saying that insurrectionists who attacks the US Capitol on January 6 "will be brought to justice."

He urged his supporters to explore ways to "ease tensions, calm tempers and help to promote peace in our country." He denounced the "potential threats" of protests in Washington, DC, and across the country reported by law enforcement to be planned by right-wing groups in the coming days, while stating that people have the right to peacefully voice their opinions.

Trump then turned his attention to the "unprecedented assault on free speech we have seen in recent days," seemingly referring to the permanent banning of his accounts on social media sites including Twitter, Facebook and Instagram and the takedown of sites such as Parler, a messaging site where some participants in the insurrection planned their actions.

"These are tense and difficult times. The efforts to censor, cancel and blacklist our fellow citizens are wrong and they are dangerous. What is needed now is for us to listen to one another, not to silence one another. All of us can choose by our actions to rise above the rancor and find common ground and shared purpose," Trump said. "Today I am calling on all Americans to overcome the passions of the moment and join together as one American people. Let us choose to move forward united, for the good of our families, our communities, and our country."

Notably absent from Trump's video was any mention of his historic second impeachment by the US House of Representatives earlier on Wednesday. The bipartisan move charged Trump with "inciting insurrection" for his actions leading up to, during, and after the January 6 putsch attempt.

The storming of the US Capitol building came shortly after a "Stop the Steal" rally hosted by Trump outside the White House at which Trump urged his followers to take action and stop the certification of the November 3, 2020, election results then underway in Congress. Trump has claimed the results were fraudulent, accusing Democrats and sympathetic tech companies of conspiring to deliver victory to Biden instead of him.

Five people died in the insurrection and Congress was temporarily dispersed as thousands of Trump's followers stormed the legislature, although the movement ultimately failed and the certification was completed after they were removed from the building by security. Thousands of troops have been sent to garrison DC against further insurrectionary plots, which federal investigators have reportedly uncovered, and the Department of Justice has opened nearly 200 cases and arrested more than 20 people in connection to the riot.

Biden is due to be sworn in on January 20.