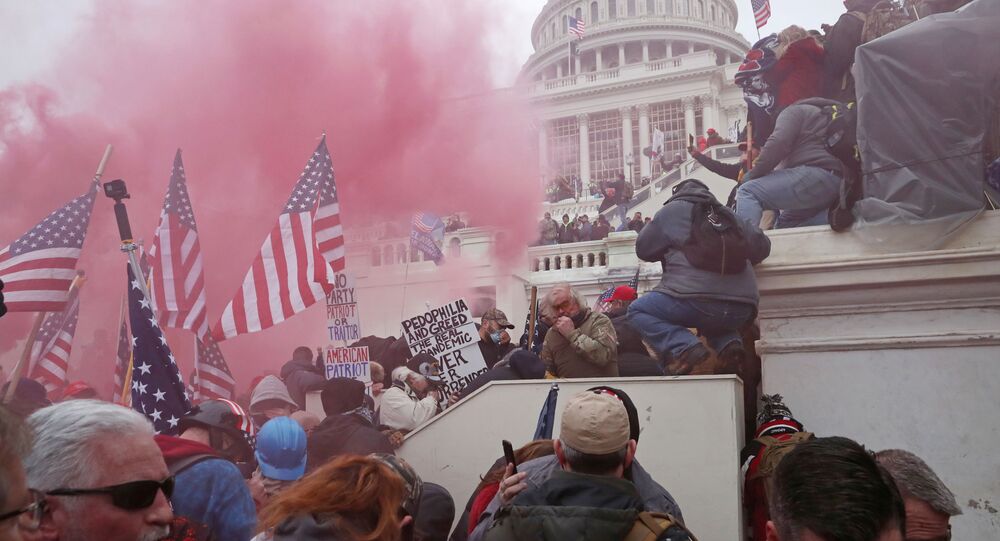 Since the Capitol riot, US President Donald Trump has brushed off any responsibility for the deadly unrest that claimed the lives of at least five people, including Capitol Police Officer Brian Sicknick. Trump has stated that his remarks at the “Stop the Steal” rally were “totally appropriate" and not a call for violence.

Permanently barred from Twitter, Trump issued a statement on Wednesday through the White House press secretary's office that called for "no violence" amid reports that demonstrations were being planned ahead of Inauguration Day.

"I urge that there must be no violence, no lawbreaking and no vandalism of any kind," reads the statement. "That is not what I stand for, and it is not what America stands for. I call on all Americans to help ease tensions and calm tempers. Thank you."

Looming demonstrations noted by Trump were highlighted earlier this week in an FBI memo that warned multiple armed protests were expected to take place across the US at all 50 state capitols, including the US Capitol. The memo stated that a "storming" was being planned at state, local and federal courthouses should Trump be removed from the Oval Office before Inauguration Day.

Additionally, federal authorities revealed that an "identified armed group" planned to travel to Washington, DC, on January 16 if congressional lawmakers proceeded with measures to invoke the 25th Amendment.

"A huge uprising will occur," warned the agency, which also explained in the bulletin that "armed protests" could be organized through "at least" Inauguration Day.

At present, the nation's capital is on high alert ahead of US President-elect Joe Biden's inauguration, with thousands of National Guard troops deployed to the city. Estimates suggest more than 20,000 troops will be available to ensure security.

Trump's Wednesday statement echoed remarks the president made to reporters on Tuesday, in which he stated he wanted "no violence" and indicated that he was not responsible for the deadly riot that broke out at the US Capitol.

In light of the unrest that unfolded, multiple lawmakers, including several Republicans, have blamed Trump for inciting the riots. Officials have stressed that comments made by the president at the "Stop the Steal" rally encouraged supporters to take action to prevent the certification of the US election results, which were temporarily halted.

If the single impeachment article is cleared in the chamber, it will mark the second time that Trump has been impeached by House lawmakers.

Although reports suggested that Senate Majority Leader Mitch McConnell (R-KY) was "pleased" with the Democrat-pushed impeachment efforts, passage of the measure in the Senate chamber seems unlikely, as the Kentucky official is "almost certainly" not convening the lawmakers on any date before January 19.