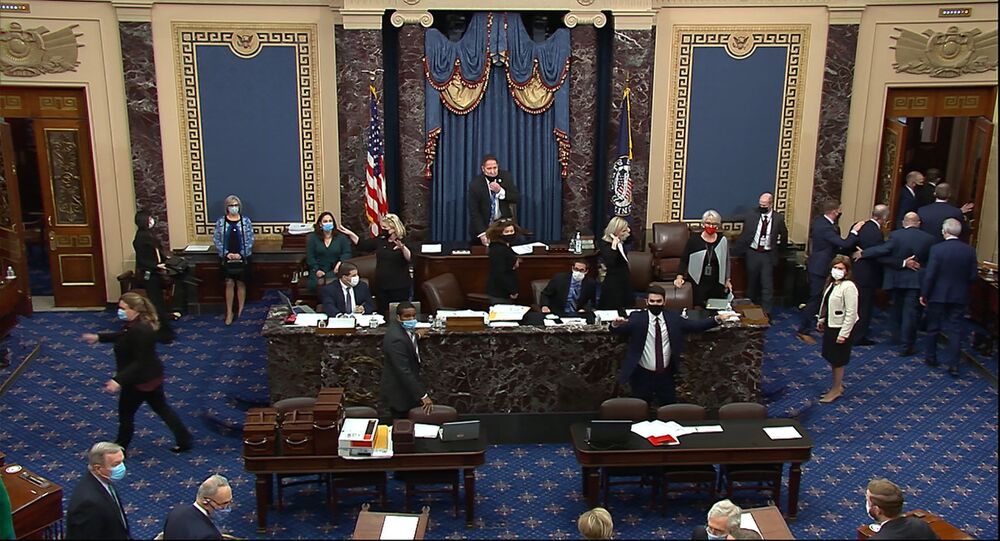 Despite the House having gathered to vote on an impeachment article against President Donald Trump over his alleged involvement in the 6 January storming of the US Capitol, the Senate is not scheduled to reconvene until Joe Biden is inaugurated and Trump is out of office.

Republican Senate Majority Leader Mitch McConnell is not planning to convene the Senate on 15 January and "almost certainly" not on any date prior to 19 January, his spokesperson Doug Andres has confirmed on Twitter. McConnell's office notified Minority Leader Chuck Schumer of the Republican senator's decision.

The response came as the House gathered on 13 January to vote on an article of impeachment against US President Donald Trump accusing him of "inciting insurrection". The Democratic leaders who initiated the impeachment said they are ready to deliver the article to the Senate this week, but without McConnell's consent, they have little chance of convicting Donald Trump before he is out of office.

The Democrats claim that POTUS is responsible for pro-Trump protesters storming the Capitol on 6 January. The incident happened after the president at a rally preceding the attack reiterated his election fraud claims and stated that he would therefore never concede. Trump also urged the vice president and congressional Republicans to oppose the certification of the election results, which was due to happen on that day.

As a result of the Capitol being stormed, one policeman and four protesters died. Democrats and some Republicans called the riot an insurrection and an attack on Democracy, while blaming Trump for it. POTUS himself was among the first to condemn the actions of the mob and called on them to maintain a peaceful protest. The president later said that he is not responsible for the protesters' aggressive actions and claimed that "people" who analysed his speech at the rally had found it "totally appropriate", but did not delve into details.

The Democrats formally introduced the single article of impeachment in the House on 12 January over allegations of "incitement of insurrection". The lower chamber initiated voting on the article on 13 January, hoping to deliver it as soon as possible to the Senate.

The latter is normally tasked with deciding whether the president should be convicted. However, the decision is unlikely to happen until after a new session of the Senate starts on 20 January. The Senate will be split at that date, 50-50, in favour of the Democrats because Vice President Kamala Harris will have the tie-breaking vote. However, a conviction requires 2/3 of the Senators to vote in its favour, which is not guaranteed, although several Republicans have openly condemned Trump's actions. After the previous impeachment by the House in December 2019, the Republican-controlled Senate voted against removing POTUS from office.

US House to Vote on Impeaching Trump Over Capitol Hill 'Insurrection'