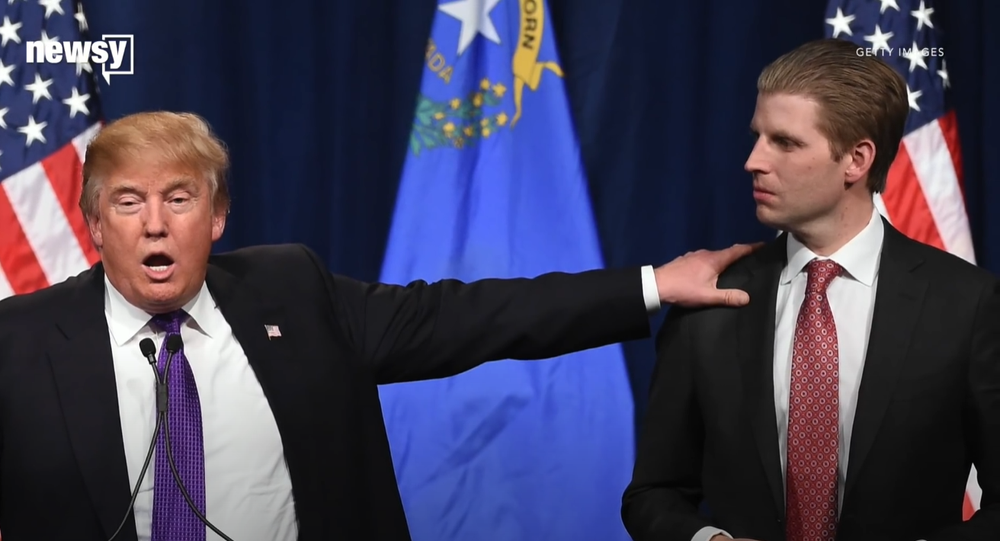 The president has faced a strong backlash since the deadly riots organised by his supporters at the US Capitol last week. Deutsche Bank has reportedly become the latest entity to cut ties with the Republican.

Eric Trump has said his father is a victim of cancel culture after numerous organisations stopped doing business with the president following the deadly protests at the US Capitol last week. The 37-year-old, who has been running the Trump Organisation along with his elder brother Donald Trump Jr., made the statement in an interview with the Associated Press.

"We live in the age of cancel culture, but this isn't something that started this week. It is something that they have been doing to us and others for years. If you disagree with them, if they don't like you, they try and cancel you", Eric Trump told the news agency.

Which Companies Have Cut Ties With Trump?

From social media and banks to sports organisations and educational institutions, the list of entities that have distanced themselves or stopped doing business with the president continues to grow.

The Professional Golf Association of America decided not to hold its 2020 championship at one of Trump's golf courses. A British golf organisation also ditched Trump's property as the venue for the British Open, widely considered the most prestigious tournament in the world.

New York City said it plans to terminate contracts with Trump to construct a skating rink and a golf course in the Bronx.

But perhaps the biggest loss for the president and the Republican Party are banks.

Several of the largest banks in the US, including Goldman Sachs and Citigroup, temporarily stopped sending donations to the Trump campaign from their political action committees (PACs).

Deutsche Bank, one of Trump's biggest lenders, has reportedly become the latest financial institution to cut ties with Trump.

New-York-based Signature Bank, which was close to the Trump family and put his eldest daughter Ivanka on its board, also cut ties with the Republican.

"We witnessed the president of the United States encouraging the rioters and refraining from calling in the National Guard to protect the Congress in its performance of duty", said the bank.

A person doing business with members of a Trump golf club in Bedminster, New Jersey told the Associated Press that some are considering freezing their memberships. The person, who wished to remain anonymous, said it would be difficult for Trump to get new clients.

"They don't want to be publicly shamed for being a member of his golf club. Do you think a guy who works for a financial firm or a drug company wants to see his picture in the paper?", said the person.

Do the latest developments worry Eric Trump? Not one bit, it would seem. The 37-year-old said the president enjoys the support of millions of people.

"You have a man who would get followed to the ends of the Earth by a hundred million Americans. He created the greatest political movement in American history and his opportunities are endless", he told the Associated Press.

Donald Trump faced strong backlash after his supporters besieged and then stormed the US Capitol last week. Five people – four civilians and one policeman – died and up to 60 law enforcement officers were injured.

Democrats accused Trump of encouraging his supporters to commit violence. For two months, the Republican has been accusing the Democrats of stealing the election and on the day of the riots told his supporters "to march" on the Capitol. Eric Trump too was present at the rally.

"Have some backbone. Show some fight. Learn from Donald Trump", he told the audience.

The president said he bore no responsibility for the deadly riots and dismissed Democrats' decision to introduce an impeachment article against him as "ridiculuous".

The Associated Press claimed that when they asked Eric Trump directly whether he thinks his father is responsible for the violent riots at the Capitol the 37-year-old hung up the phone.