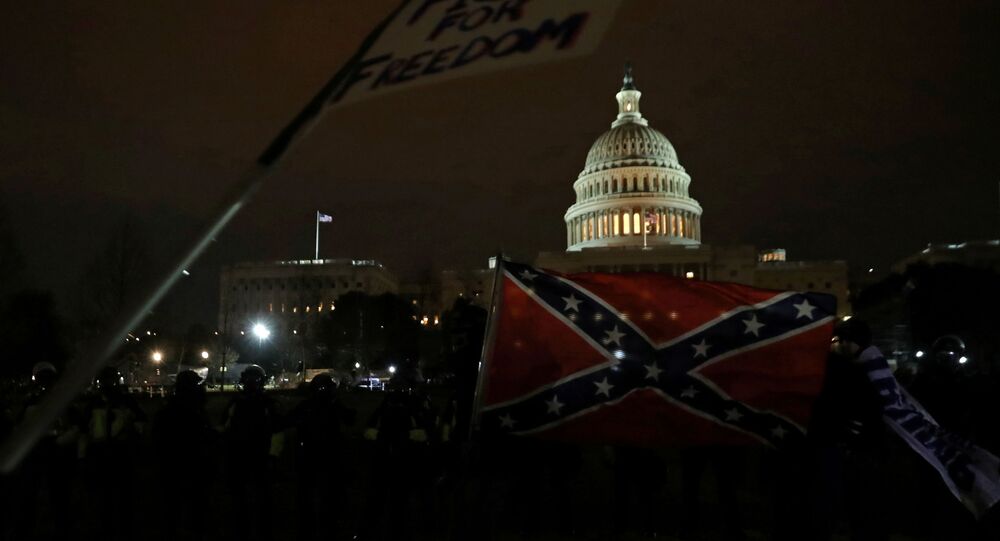 US House to Vote on Impeaching Trump Over Capitol Hill 'Insurrection'

WASHINGTON (Sputnik) - The Democratic-controlled US House of Representatives is expected to vote on Wednesday to impeach President Donald Trump over last week's violence on Capitol Hill, although chances are likely slim the Senate will decide to convict and remove him from office.

While overall proceedings have little chance of being wrapped up before Joe Biden's inauguration on 20 January, the impeachment - which is akin to an indictment - if successful, may bar Trump from holding public office ever again, including running for president in 2024.

Articles of impeachment introduced by the House Democrats on Monday accused Trump of "high Crimes and Misdemeanors by inciting violence against the Government of the United States", including at the rally on 6 January, immediately before his supporters attacked the Capitol in a bid to thwart the Congressional certification of Biden's win.

"Thus incited by President Trump, members of the crowd he had addressed…. unlawfully breached and vandalized the Capitol, injured and killed law enforcement personnel, menaced Members of the Congress, the Vice President, and Congressional personnel, and engaged in other violent, deadly, destructive, and seditious acts", the resolution said.

Some Republican leaders, however, have warned that impeaching Trump with just over a week before his term ends will only further divide the country.

Five people - four protesters and a police officer - were killed in the riots. The last time the Capitol was stormed was when British troops marched into Washington and set fire to the building in 1814.

The storming of the Capitol came immediately after Trump, in a fiery speech near the White House, urged his followers to fight and not allow the election to be "stolen".

Though Trump condemned the violence and committed himself to an orderly transition, there are fears of new flare-ups that prompted authorities to impose since Wednesday a security lockdown in downtown Washington, DC, and authorise the deployment of up to 15,000 National Guard servicemen.

Articles of impeachment also allege that in the months preceding the certification Trump repeatedly issued false statements asserting that the presidential election results were the product of widespread fraud and should not be accepted by the American people. The text mentions the incumbent's recent call to Georgia officials asking them to find enough votes for overturning his defeat.

US election security officials and the Justice Department have refuted Trump's claims of large-scale vote fraud.

Before launching impeachment proceedings, Democrats are urging Vice President Mike Pence to exercise his 25th amendment rights and together with other high-ranking executive officials strip Trump of his powers.

© REUTERS / JOSHUA ROBERTS
Members of the National Guard move boxes of food at the U.S. Capitol as Democratic members of the House prepare an article of impeachment against U.S. President Donald Trump in Washington, U.S., January 12, 2021

Their hopes were quashed when the White House announced that Pence and Trump met on Monday and pledged to work together for the rest of their term. The meeting reportedly marked the first time the duo talked since the riots.

The House of Representatives charges an official of the federal government by approving in a simple majority vote articles of impeachment. The Senate’s subsequent role is to sit as a High Court of Impeachment - considering the evidence, hearing witnesses, and finally voting to acquit or convict the impeached official.

The Constitution requires for conviction a two-thirds vote of the Senate. In some cases, the Senate has also disqualified such officials from holding public offices in the future.

In December 2019, Trump was impeached by the House of Representatives on the abuse of power and obstruction of Congress charges - over alleged attempts to force Ukraine into probing Biden's son. But the Senate, where the Republican Party enjoyed a majority, acquitted him in February 2020.

Though this time the impeachment may be held in the Democratic-led Senate, the 100-seat chamber is still unlikely to produce enough votes for finding Trump guilty. In the coming days, after all, new Senate members are sworn in, Democrats will secure 50 seats with the Republicans retaining the other 50 and new Vice President Kamala Harris, also a Democrat, entitled to cast a decisive vote.

"They need enough support to get to 67 Senators, which would be 17 Republicans. That's a lot, and I don't think they have that much", Kermit Roosevelt, a professor at the University of Pennsylvania Law School, told Sputnik.

However, The New York Times reported on Tuesday that some Republican are not actively lobbying colleagues to vote against impeachment in the same way they did last year.

© REUTERS / J. Scott Applewhite
The Republican side, right, in the House chamber is seen as Speaker of the House Nancy Pelosi, D-Calif., and Vice President Mike Pence officiate as a joint session of the House and Senate

Republican leaders and Trump's lawyers warn that impeaching the incumbent days before or even after his term ends is not appropriate. Their opponents insist that there is strong historical evidence for "late impeachability" and it would set a dangerous precedent to declare misconduct unimpeachable if it’s committed late enough in the term.

Some scholars entertain a possibility of slapping Trump with disqualification from future offices, which, as they claim, may require a simple majority vote at the Senate instead of a supermajority needed for a full-fledged impeachment.

Biden urged lawmakers to find time during impeachment proceedings to deal with his administration agenda. He supported an idea of dividing each day in half with evenings allocated to Trump's trial and mornings to Cabinet appointments or stimulus package deliberations.

On Tuesday, Trump told reporters that his possible impeachment is a "continuation of the greatest witch hunt in the history of politics."

"I think it's causing tremendous anger", he added.