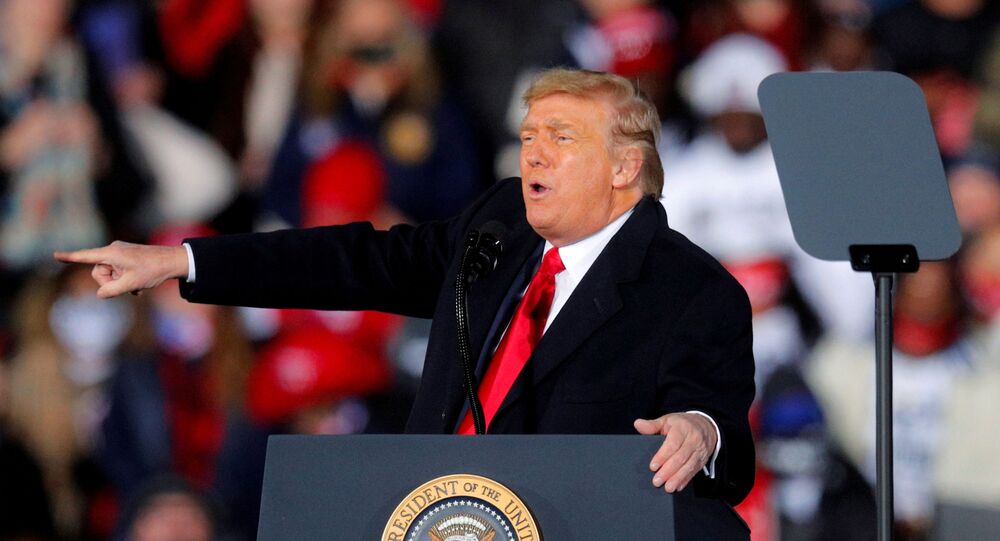 Earlier media reports suggested that the FBI expects armed protests in the vicinity of state capitols across the US if President Donald Trump is impeached or otherwise removed from office before his term concludes.

US President Donald Trump has condemned the move to impeach him as "absolutely ridiculous" and a "continuation of the greatest witch hunt" in the history of US politics. The president argued that the attempts to remove him from office are causing "tremendous anger". When asked by reporters if he would resign, POTUS declined to answer.

Trump added that he wants "no violence" on US streets and stated that he bears no responsibility for the angry protesters storming the Capitol building on 6 January. He suggested that his remarks had been analysed and that "people thought" what he said at the rally preceding the incident was "totally appropriate". POTUS did not specify who the "people" he was referring to were.

The president went on to castigate the actions of "Big Tech", namely for suspending or banning his social media accounts and trying to mute the Parler platform, which is popular with American conservatives. POTUS called the actions of the tech giants a "catastrophic mistake" that divides the country and stressed that he had warned that these companies could engage in such behaviour.

The US president has been facing calls to resign coming from Democrats, as well as from some fellow Republicans, after an angry mob of pro-Trump protesters stormed the Capitol on 6 January and clashed with Capitol Police, resulting in five fatalities. The protesters rushed to prevent the Congress' certification of the election results following the president's speech at a rally on the same day, where he reiterated his claims of election fraud taking place in November.

The Democrats claim that POTUS had incited an "insurrection" attempt with his remarks and demand that Vice President Mike Pence invoke Section 4 of the 25th Amendment to remove Trump from power over his alleged "inability" to perform his duties. The party’s congressional leaders called the president's actions a "threat" to the Constitution and to US "democracy". House Democrats formally introduced the impeachment article over alleged "inciting of insurrection" and threatened to put it up for a vote on 13 January if Pence does not invoke the 25th Amendment.

© REUTERS / POOL
Vice President Mike Pence presides over a Joint session of Congress to certify the 2020 Electoral College results after supporters of President Donald Trump stormed the Capitol earlier in the day, on Capitol Hill in Washington, U.S. January 6, 2021.

Trump has repeatedly denied being the cause of the 6 January violence. Soon after the protesters rushed into the Capitol, he issued an appeal on Twitter calling on people to act peacefully and respect the law. POTUS condemned the actions of the aggressive mob, promising that all those responsible would be punished.

Despite this and the deletion of several posts that Twitter had marked as inappropriate, several social media platforms claimed that they would not allow the president to incite violence via their services any more. Twitter, Snapchat, Facebook, Instagram, and Discord either banned or suspended POTUS from their platforms, while Google, Apple, and Amazon deplatformed Parler – a social media service popular among conservatives, including Trump supporters.

Pelosi Moves for Impeachment in Final Days of Trump Administration