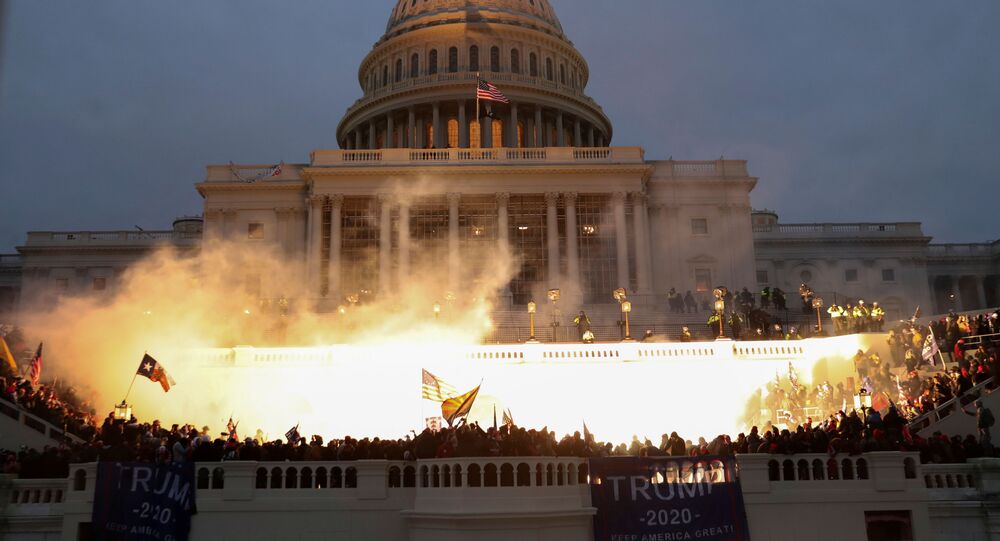 In the extensive video footage captured during the January 6 uprising, numerous instances in which US Capitol Police seem to help the insurrectionists to enter and maneuver about the Capitol building were recorded and posted on social media.

In the aftermath of the insurrection by supporters of US President Donald Trump who stormed the US Capitol, two US Capitol Police officers have been suspended and more than a dozen are under investigation for their actions during the incident.

On Monday, US Rep. Tim Ryan (D-OH), who heads the Legislative Branch Appropriations Subcommittee in the House, told reporters that two US Capitol Police officers had been suspended. One officer took a selfie with one of the rioters inside the Capitol, and another put on a red “Make America Great Again” baseball cap, a badge of Trump and his ideological supporters, and allegedly directed the rioters toward their targets while on duty.

Ryan further noted another 10 to 15 officers were under investigation, and the DCist reported that at least one police officer from the force of Anne Arundel County, a nearby Maryland county, was being investigated for potentially having participated in the insurrection.

As the insurrection was still unfolding, Sputnik was among the first to report on potential collusion between Capitol Police officers and the insurrectionists, including opening doors and pulling back barricades, allowing the rioters to enter the building unimpeded.

​However, at other places inside and outside the national legislature, security officials met the rioters with force, deploying tear gas and flash-bang grenades as rioters engaged them in hand-to-hand combat.

Five people died in the uprising, including a protester who was shot by a Capitol Police officer and another officer who was beaten with a fire extinguisher. Shortly after, US Capitol Police Chief Steven Sund resigned.

The Washington Post reported that police departments from across the country have their hands full at present with investigations of reported involvement in the insurrection by officers on their force. Sputnik has also reported on the extensive participation in the riot by white nationalist and neo-Nazi group members, including people who helped organize the August 2017 “Unite the Right” rally in Charlottesville, Virginia, during which an attendee killed a counterprotester in a car ramming attack.

In addition, the Pentagon is attempting to probe the potential involvement of active-duty service members in the uprising, but Army Secretary Ryan McCarthy told reporters the process is difficult. However, several retired veterans are known to have participated, including retired Air Force senior airman Ashli Babbitt, the protester killed by Capitol Police gunfire, and retired Air Force Lt. Col. Larry Rendall Brock Jr., who was arrested on Sunday, according to Military Times.

Some other veterans identified in the footage include retired Air Force Lt. Colonel. Larry Brock, whom the New Yorker identified as an insurrectionist photographed carrying restraining zip ties inside the Senate chamber.

​The January 6 insurrection began shortly after a “Stop the Steal” rally hosted by Trump at the White House, during which he encouraged his supporters to take action in defense of US democracy. Trump has claimed the outcome of the November 3, 2020, election was fraudulent and that he is the rightful winner, not US President-elect Joe Biden. The goal of the insurrection was to stop Congress from certifying the election results.

Earlier on Monday, House Democrats introduced articles of impeachment against Trump for allegedly inciting the insurrection, and the Pentagon has deployed more than 6,000 National Guard troops to Washington, DC, at the request of the city government in order to maintain order and ensure a peaceful transfer of power.