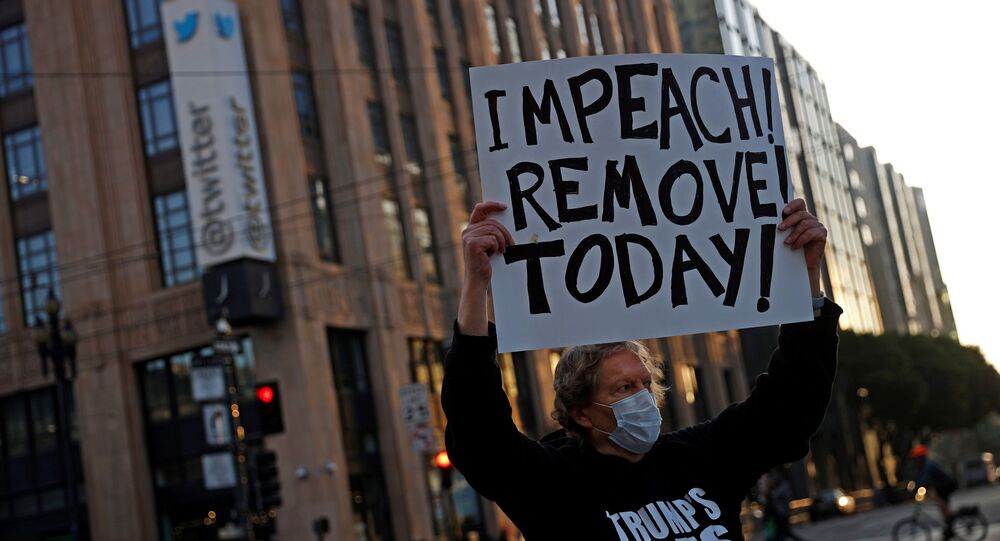 A rumoured dawn flash mob assault on big tech firm Twitter's headquarters in San Francisco turned out to be a false alarm, but not until after nearly 30 police officers were sent to barricade the doors of the office.

The big tech firm saw a 12 percent drop in share value in pre-market trading on Monday, slumping from its $51.48 per share price at the close of trade on Friday to $45.67. The price rallied briefly before falling back to $48.74 in the afternoon.

Trump supporters deserted Twitter in droves over the weekend after the site deleted the president's account, which claimed around 88 million followers. Conservative politicians and media figures saw tens of thousands of their followers disappear since last week, which, two House Democrats claimed, was due to Twitter purging "neo-Nazis" and "terrorists".

"After close review of recent Tweets from the @realDonaldTrump account and the context around them we have permanently suspended the account due to the risk of further incitement of violence," Twitter announced on Friday as it shut down the president's account.

Twitter's move followed Wednesday's violent occupation of the US Capitol building which saw 5 killed and temporarily disrupted the confirmation of Democrat Joe Biden as president-elect. Trump issued several tweets during the unrest, some of which urged protesters to remain peaceful, co-operate with police and to go home.

One protester was fatally shot by Capitol police, while one officer manning the security cordon around the Congress building later died in hospital.

© AP Photo / Andrew Harnik
House Dems Introduce Article of Impeachment Against Trump for 'Incitement of Insurrection’
Nearly 30 police officers barricaded Twitter's headquarters in San Francisco early on Monday morning after rumours circulated that a flash mob of Trump supporters angry at the ban on the president would descend on the building. Photos showed alone anti-Trump protester holding a hand-written placard outside the office.

​But that proved to be a false alarm, with the San Francisco Chronicle reporting that nobody turned for the claimed start time of 8am.

Twitter is not the only big tech firm with problems. Mobile phone messaging app WhatsApp has also seen an exodus of users since it changed its privacy policy to allow all user data to be shared with parent company Facebook.