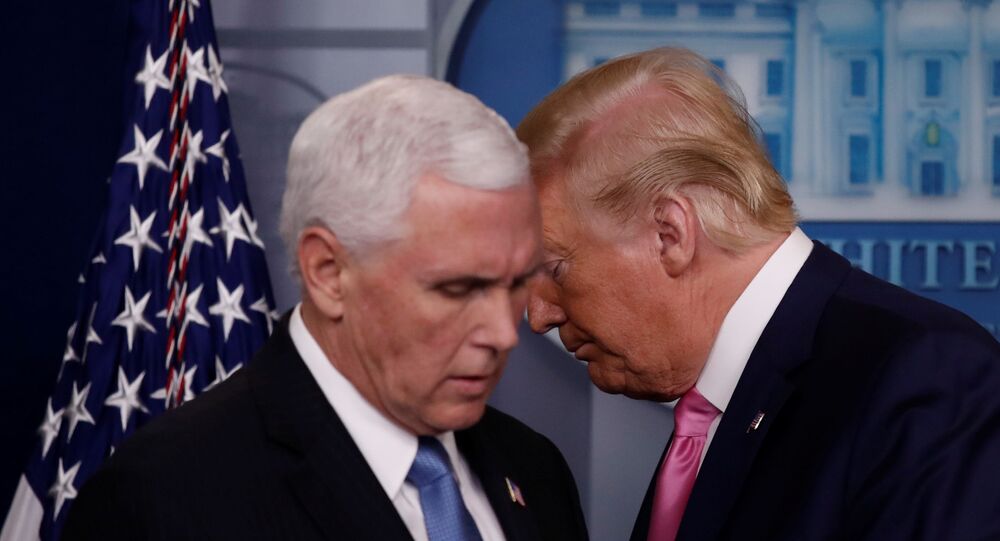 The 6 January Capitol incident, which left five people dead, has split the GOP over Donald Trump's potential 2024 election bid. US academics have discussed why the Republicans are growing disenchanted with Trump and whether the party will promote him during the next presidential race.

A growing number of Republicans are holding the president responsible for the clashes, although previously he was largely seen as a future GOP standard bearer after he leaves office, according to Politico.

Even Vice President Mike Pence, Trump's longtime ally, has not ruled out invoking the 25th Amendment to remove the president from office should he become "more unstable", CNN reported, citing a source close to the vice president. Forbes admits that Donald Trump's election odds have plummeted from 33/1 to 6/1 following the Capitol protests. For his part, Star-Ledger columnist Paul Mulshine suggests that Trump "will be lucky to finish out this term, never mind run again in 2024", expecting GOP candidates Chris Christie and Mike Pence to throw their hats in the ring in four years.

Why GOP 'Will be Forced to Break Ties With Trump'

"Some Trump allies stopped supporting him based on principle: They believe his current behaviour is erratic", says Robert Collins, a political analyst from Dillard University. "However, most have stopped supporting him for practical political reasons: His numbers are dropping in current polling data and they don't want to get dragged down with him and lose their own voters".

Collins observes that the GOP has been split into two factions: pro-Trump and anti-Trump forces. However, "a divided party is a weak party, and eventually they will be forced to break ties with Trump", he suggests.

"Many predict that he will attempt to run again in 2024", he notes. "That might have been possible before last week. However, the violent events of last week have caused him to lose too much popularity to run again. So he has no political future".

Nevertheless, the political analyst acknowledges that the president "does still have his most hardcore base followers", which amounts to roughly 35% of the US electorate, "who will follow him anywhere". Collins expects Trump to capitalise on that by starting his own media outlet, perhaps Trump TV, especially after the president and his ardent supporters were banned from a number of popular social media platforms.

© REUTERS / POOL
Vice President Mike Pence presides over a Joint session of Congress to certify the 2020 Electoral College results after supporters of President Donald Trump stormed the Capitol earlier in the day, on Capitol Hill in Washington, U.S. January 6, 2021.

Why Pence Has Split With Trump

It's hardly surprising that Pence is now at odds with President Trump, according to David Schultz, author and professor of political science and law at Hamline University.

"Pence has been very loyal to Trump for four years but that ended on January 6", says the academic. "The reason for that is that Donald Trump was urging the vice president to throw out electoral votes when Congress met in a joint-session on that date to validate the electoral votes of the states".

The professor explains that under US law the vice president has no authority to reject electoral votes during the joint congressional session. Although Pence tried to make this point to the president, the latter apparently did not accept it and reportedly banned Pence's chief of staff from the West Wing.

"In addition, there is a sense for Pence that if he wants a political future where he runs for vice president he needs to distance himself from Trump, especially after the riots on January 6", Schultz notes. "In short, their political interests and needs are going in different directions".

Earlier, Indianapolis Monthly pointed out that Pence allies had confirmed the veep's interest in running for president in 2024. For its part, Forbes signalled last Thursday that Pence's election odds had soared following the Capitol protests "moving up to +600, just behind President-elect Joe Biden and Vice President-elect Kamala Harris".

"Essentially Trump has become politically damaged goods for many Republicans", presumes Schultz. "He lost the election and he has damaged his reputation in the last few weeks. He will no longer be president and he no longer has any power or influence over many Republicans who are looking to reinvent the party without him. January 6 was the coming to a head of a major fight in the Republican Party that had been brewing for four years. He will not run for president again".

© REUTERS / ERIN SCOTT
U.S. Speaker of the House Nancy Pelosi holds the Speaker's gavel as she leads the first session of the 117th House of Representatives and administers the oath of office to members in Washington, U.S., January 3, 2021.

Impeachment: Dems Trying to Prevent Trump From Running in 2024

Nonetheless, Koichi Hamada, professor emeritus at Yale University, warned on 6 January about the Trump brand's apparent vitality. Despite the Trump administration's flawed response to the COVID pandemic and the death of over 350,000 from the novel coronavirus, "many of Trump’s supporters remain as loyal as ever", and "more than 74 million Americans voted for Trump in November", Hamada noted in an opinion piece for Project Syndicate.

It appears that the Democratic Party is also not so sure that Trump is politically defeated, as they are rushing to impeach the president over allegedly inciting the Capitol siege in order to ban him from holding office in the future. House Speaker Nancy Pelosi has vowed to fast-track the process this week unless Vice President Pence invokes the 25th Amendment.

New York Magazine writes that "there is a case increasingly being made for proceeding with impeachment and forcing a Senate trial of Trump that would conclude after January 20": "It’s probably accurate to say the weight of expert opinion is that it’s entirely possible to impeach and convict a former president", argues the magazine.

However, Harvard Law Professor Emeritus Alan Dershowitz recently told Fox News that Democrats have no chance of successfully impeaching and ousting Trump before Inauguration Day on 20 January. Once Trump leaves office he will be a private citizen and "Congress has no power to impeach or try a private citizen, whether it be a private citizen named Donald Trump or named Barack Obama or anyone else", he said.

At the same time, American attorney Jeffrey Scott Shapiro argues that the Dems' "incitement of insurrection" accusations against Trump do not actually hold water.

"The president didn’t commit incitement or any other crime", he wrote in an op-ed for The Wall Street Journal, citing his own experience as a Washington prosecutor as well as earlier judicial precedents. "The president didn’t mention violence on Wednesday, much less provoke or incite it", Shapiro underscored.