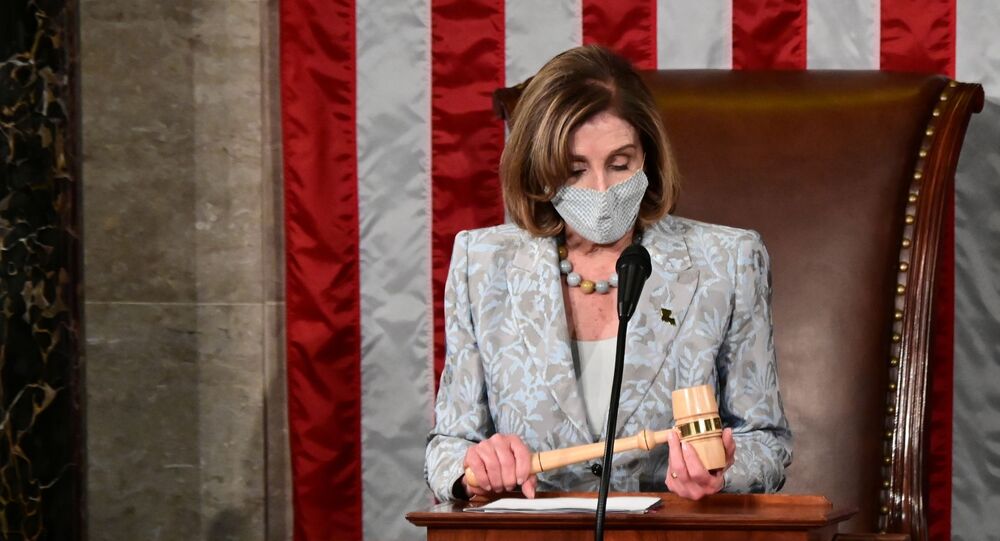 Calls for ousting Trump either through invoking the 25th Amendment or by launching a procedure of impeachment have been actively voiced following the US Capitol siege, with lawmakers accusing Trump of inciting the violence.

The House of Representatives will consider a resolution on Monday calling Vice President Mike Pence to invoke the 25th Amendment to remove President Donald Trump from power, House Speaker Nancy Pelosi announced in a statement on Sunday.

According to the statement, the resolution calls on Pence "to convene and mobilize the Cabinet to activate the 25th Amendment to declare the President incapable of executing the duties of his office." The legislation allows the US vice president to take over if the president is unable to do his job – either permanently or temporarily.

The resolution gives Pence a "deadline" of 24 hours to respond, after that, the House "will proceed with bringing impeachment legislation to the Floor."

The news comes as only a few days are left before Democrat Joe Biden is set to swear in as the 46th president of the United States.

On Monday morning, there'll be resolution in the House calling on the @VP "to convene and mobilize the Cabinet to activate the 25th Amendment to declare the President incapable of executing the duties of his office," @SpeakerPelosi tells colleagues. pic.twitter.com/kgyPGmo8XL

Both Senate Minority Leader Chuck Schumer and House Speaker Pelosi have eagerly voiced calls for Trump's removal from the office, holding him responsible for the DC riots. In an interview on Sunday, Pelosi reiterated her desire for Trump to be impeached.

"I like the 25th Amendment because it gets rid of him. He’s out of office. But there’s strong support in the Congress for impeaching the president a second time."

CNN reported on Saturday citing a source close to Pence that his team feared Trump could allegedly conduct actions that would put the nation at risk, so they were not excluding the possibility of using the 25th Amendment if his behavior becomes "unstable".

Prior to that, Pelosi said she had instructed instructed the House Rules Committee to be ready to go forward with a potential impeachment procedure against Trump.

House Democrats have already drafted new articles of impeachment against Trump, which are also set to be formally introduced on Monday. The articles charge Trump with "abuse of power" and "incitement of insurrection".

The chances of Trump actually being impeached seems unlikely. For the Senate to convene earlier than January 19, it requires the consent of all 100 Senators, which would be hard in the GOP-controlled chamber.

On Wednesday, thousands of angry Trump supporters stormed US Capitol in a bid to prevent the Congress from certifying Biden's victory in the 2020 election. The protesters attacked police with metal pipes and chemical irritants, damaged property, seized the inauguration stage and occupied the rotunda inside the Capitol building. The attack came after Trump urged his supporters to keep fighting to overturn the election results.

The session, however, resumed deep in the night.

Following the violent events on Wednesday, the Department of Defense reportedly indicated that violence could repeat in the days up to and during Biden's inauguration on January 20.