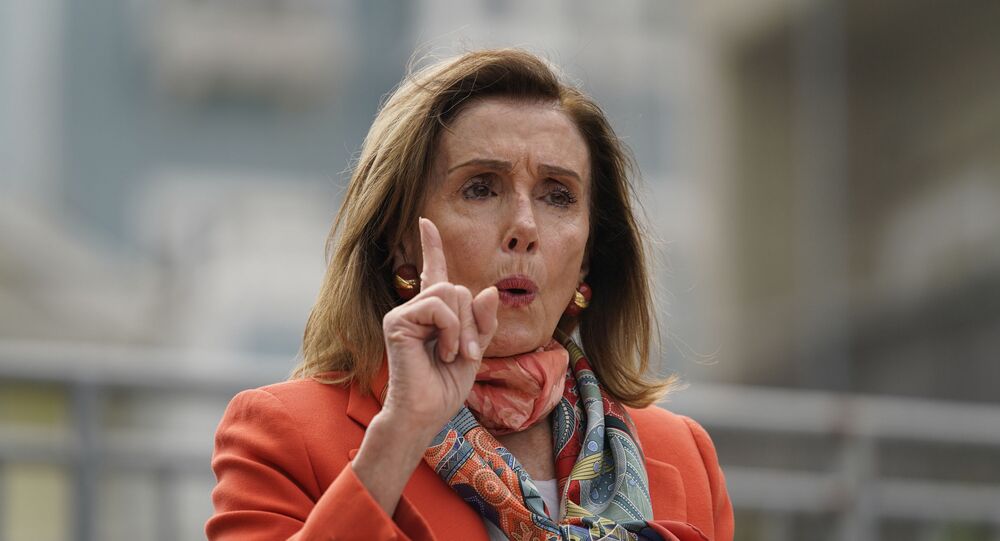 On Thursday, Pelosi announced that she would be joining fellow colleagues to call for President Trump's immediate removal from office under the 25th Amendment, following the Capitol Hill riots by his supporters on 6 January.

In a letter to fellow Democratic lawmakers, US House Speaker Nancy Pelosi pointed out her recent conversation with the Pentagon's top general about preventing President Donald Trump from taking any military action.

"This morning, I spoke to the Chairman of the Joint Chiefs of Staff Mark Milley to discuss available precautions for preventing an unstable president from initiating military hostilities or accessing the launch codes and ordering a nuclear strike", the letter, published on Pelosi's website, reads.

The House speaker then went even further by claiming that "the situation of this unhinged president could not be more dangerous", and urging her colleagues "to do everything that we can to protect the American people from his unbalanced assault on our country and our democracy". The Pentagon has yet to comment on the matter.

!! PELOSI says she spoke to the chairman of the Joint Chiefs this morning about preventing "an unhinged president" from "initiating military hostilities." pic.twitter.com/OkXqHUTfsS

The letter came shortly after Pelosi told reporters that she would be joining Senate Democratic Leader Chuck Schumer to call on Vice President Mike Pence "to remove" Trump "by immediately invoking the 25th Amendment".

"If the vice president and Cabinet do not act, Congress may be prepared to move forward with impeachment - that is the overwhelming sentiment of my caucus and the American people", she added, warning that "justice will be done to those who carried out […] acts of sedition and acts of cowardice".

Under the 25th Amendment, Pence needs a majority of Trump's Cabinet members to agree that the president is unfit for office so that the vice president can take over for POTUS. Pence didn't immediately comment on the calls related to the 25th Amendment, but on Saturday, CNN cited unnamed sources as saying that he's not ruling out the possibility of invoking the law.

Republican Sentor Lindsey Graham, for his part, was not sure that such a move is "appropriate at this point", given the US president has less than two weeks before leaving office.

"I'm looking for a peaceful transfer of power", he stressed, admitting that Trump's legacy had been "tarnished" by Wednesday's events at the Capitol.

Trump Admits to Transition of Power

POTUS pledged in a video address on Thursday night that there will be an orderly transition of power to Democrat Joe Biden following his victory in the presidential race.

"A new administration will be inaugurated on 20 January. My focus now turns to ensuring a smooth, orderly, and seamless transition of power. This moment calls for healing and reconciliation", Trump underscored.

© REUTERS / POOL
Pence Not Ruling Out Invoking 25th Amendment if Trump's Behaviour Becomes More Unstable - Report
The remarks followed the violent riots in Washington, DC, on Wednesday, when thousands of Trump supporters stormed the US Capitol building as Congress convened for a joint session to certify the Electoral College vote and officially declare President-elect Joe Biden the winner of the 3 November election.

Tweets from Trump's now deleted Twitter account showed that he called on protesters to "go home with love and in peace".