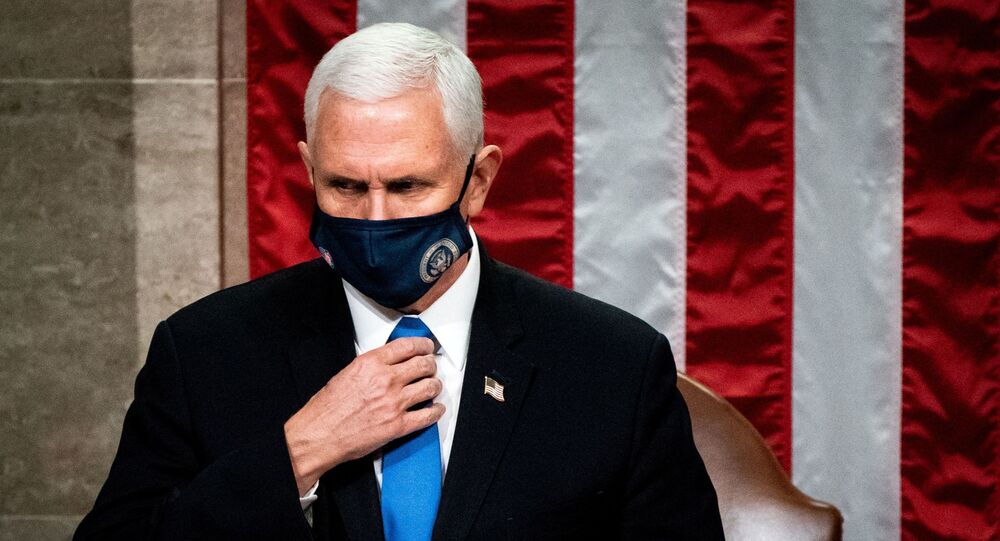 Earlier media reports said the vice president was opposed to using the amendment in order to oust Trump, though Democratic lawmakers have been urging him to do so since the US Capitol siege on Wednesday.

US Vice President Mike Pence is not excluding the possibility of invoking the 25th Amendment in order to remove Donald Trump from power if the president becomes more unstable, CNN reported on Saturday, citing a source close to the VP.

According to the source, there are fears within Pence's team that Trump could allegedly conduct actions that would put the United States at risk, and this week's events showed that this option has to be on the table.

At the same time, they are hoping for a peaceful transition of power and helping President-elect Joe Biden fight the pandemic, the source added.

According to CNBC, US Secretary of State Mike Pompeo and Secretary of the Treasury Steven Mnuchin had actually discussed invoking the 25th Amendment with their respective agencies and came to the conclusion that the process would take longer than Trump is supposed to remain in office before Joe Biden is sworn in, so no immediate effect should be expected.

The 25th Amendment allows for a temporary or permanent transfer of power from the US president to vice president if the majority of Cabinet members certify to Congress that the president is unable to perform his duties.

Following the US Capitol siege on Wednesday, 6 January, when thousands of Trump supporters stormed the building in order to prevent Congress from certifying Biden's victory in the election, several Democratic lawmakers accused the president of being responsible for the violence. Senate Minority Leader Chuck Schumer and House Speaker Nancy Pelosi have both called on Pence to invoke the 25th Amendment, otherwise, they insisted, an impeachment procedure should be launched to oust President Trump.

"If the vice president and the Cabinet refuse to stand up, Congress should reconvene to impeach the president", Schumer stressed.

Pelosi said on Thursday that she has already instructed the House Rules Committee to be prepared to move forward with a potential impeachment procedure against Trump.

New articles of impeachment have been drafted by House Democrats, seeking to oust Trump on charges of "abuse of power" and "incitement of insurrection". They are set to be formally introduced on Monday.

Donald Trump willfully incited his supporters to storm the U.S. Capitol and disrupt the peaceful transition of power. He must be impeached and removed. The Articles of Impeachment we drafted with @RepCicilline and @RepRaskin now has over 150 cosponsors. pic.twitter.com/zjk6i0Wcf4

At the same time, Biden avoided saying officially that he supports impeaching Trump, but mentioned his future administration will be focused on battling the coronavirus pandemic and dealing with economic issues, leaving it to Congress to act on the impeachment procedures. "What the Congress decides to do is for them to decide", he said.

While not formally endorsing impeaching Trump, Biden, nevertheless, said that he is not "fit" to be president, adding that it was a "good thing" Trump is not going to attend his inauguration on 20 January. Pence, however, is welcome at the ceremony.

Impeachment, however, is unlikely because there are only a few days left before Biden is sworn in as the 46th president of the United States. House Republican Leader Kevin McCarthy warned that impeaching the president with 12 days left would only divide the country.

In another blow to Trump, his Twitter account has been banned permanently, with the company citing risks that the president could further use it to provoke violence.

"After close review of recent Tweets from the @realDonaldTrumpaccount and the context around them we have permanently suspended the account due to the risk of further incitement of violence", the company said in a statement.

The move sparked controversy both among Trump followers and social media personalities, who said that it means tech giants are now able to censor anybody, even the president. Mexican President Andres Manuel Lopez Obrador called social media blocks on Trump a "bad sign" for freedom, expressing "serious" concerns about private tech companies' might to "silence and censor".