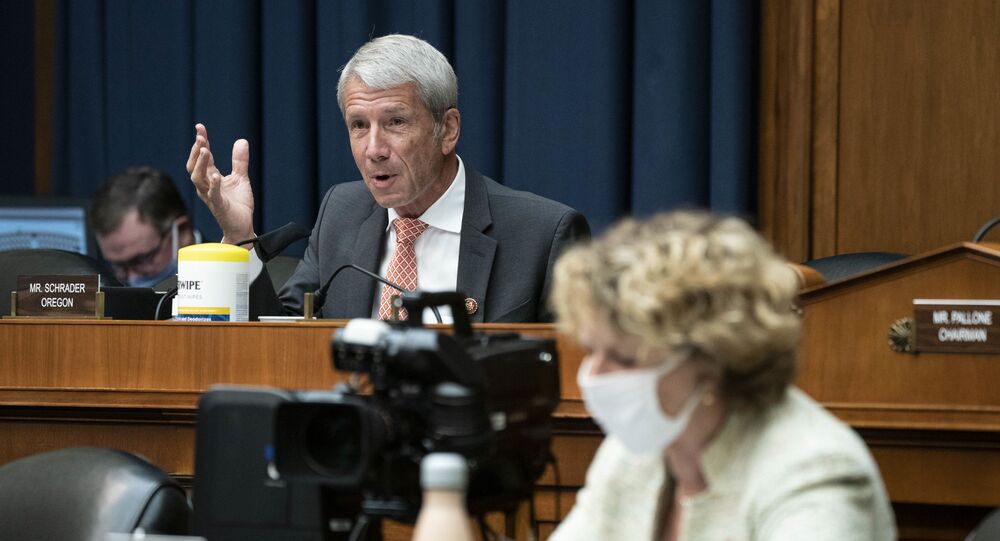 Following the violent turn of events in Washington, DC, with the siege of the US Capitol amidst the electoral vote certification, House Democrats are barrelling toward President Trump's impeachment for his alleged endorsement of the violence and purported misinformation that led his supporters to storm the heart of US lawmaking.

House of Representatives member Kurt Schrader of Oregon issued an apology via Twitter for his recent remarks, in which he called the House's attempts to initiate a second impeachment of President Trump a "lynching", Politico reported.

According to the report, during a private caucus call on Friday devoted mainly to the events of Wednesday and the role of Trump, Schrader told his fellow party members that impeachment could backfire all over the country, specifically dubbing the impeachment effort an "old-fashioned lynching" that would tear the nation apart just as Trump is about to leave office.

"I don’t want to breathe life into the corpse of this president, I don’t want him to become a martyr," he added.

The lynching comment drew quick criticism of Schrader, so the politician issued a statement acknowledging that the "language" he used during the Caucus conference call was wrong, and asked for an apology.

I recognize the horrible historical context of these words and have started to reach out to my colleagues personally to express that I understand the harm caused. I will work hard to rebuild trust and again, I humbly apologize.

Comparing the impeachment of a treasonous President who encouraged white supremacists to violently storm the Capitol to a “lynching” is shameful and indefensible.

Schrader was also condemned by his fellow Oregon representative, Suzanne Bonamici, who distanced herself from her incautious colleague.

"Our nation has an unforgivable history of murdering Black men and women," Bonamici told Oregon Public Broadcasting. "Comparing a lynching to holding the president accountable is hurtful and insensitive, and ignores the overt White supremacy on display during the insurrection Wednesday."

© REUTERS / JIM BOURG
Giuliani, Dershowitz Could Defend Trump If He Faces Impeachment, Report Says
Reportedly, there is a broad consensus in the House about the invocation of impeachment, and the Democrats are expected to introduce articles accusing Trump of "incitement of insurrection" on Monday's pro forma session, as House Speaker Nancy Pelosi made it very clear that the lower chamber must act against Trump no matter what.

The calls to impeach the sitting president, backed by most of the Democrats and some of the Republicans, have risen since the violence broke out during the riots in the US capital, when thousands of Trump supporters stormed the Capitol building, causing heavy property damage, and forcing the Congress to go under lockdown and the evacuation of the lawmakers.

As a consequence, more than 6,000 U.S. National Guard soldiers have also been deployed to the Washington, DC, region to maintain order during the inauguration on January 20.