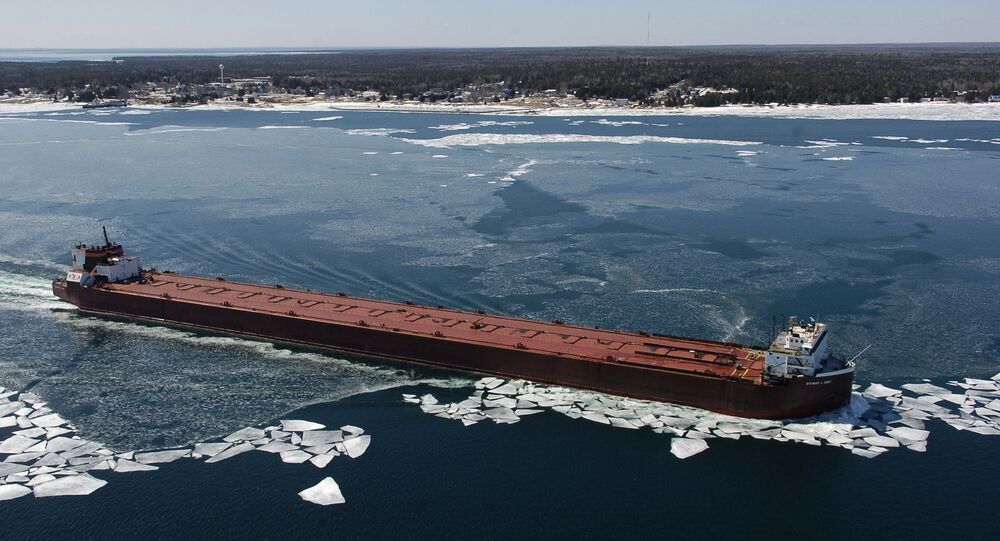 Ice Cover in US Great Lakes ‘Has Fallen by Six Percent Every Decade’ So is Climate Change to Blame?

Last month the US Senate vote unanimously in favour of extending the US$2.7 billion Great Lakes Restoration Initiative for another five years. But how has the world’s biggest freshwater lake complex been affected by climate change and pollution in recent years?

Earlier this week President Donald Trump signed legislation renewing the Great Lakes Restoration Initiative (GLRI), which will increase annual funding from US$300 million to $475 million by 2026.

Funding for the GLRI, a bipartisan program first conceived during George W. Bush's presidency, became an election issue in the region during the 2020 campaign.

Some GREAT news for the #GreatLakes - the Great Lakes Restoration Initiative is officially reauthorized for 5 more years with increased funding to get important work done to clean up and protect the lakes. #GLRI @ELPCenter https://t.co/Aagce3VIow

​Trump was fighting to hold on to Michigan, Wisconsin and Ohio - which he won in the 2016 election - and was keen to impress on his record in the Great Lakes region.

In September, referring to the GLRI, he told supporters at a rally in Freeland, Michigan: "It's all done. That deal is all done."

"I also authorised millions of dollars to save Michigan’s Soo Locks. Forget all the problems they had,” he added, a reference to construction of a new US$922 million lock allowing bigger ships to pass between Lake Superior and Lake Huron.

The Great Lakes - Superior, Huron, Michigan, Erie and Ontario - is the largest freshwater ecosystem on Earth and plays a vital role in the environmental and economic life of both the United States and Canada.

This map shows just how important the Great Lakes are - and particularly the Soo Locks, which allows iron ore to be transported from Minnesota to steel mills in Illinois, Ohio and elsewhere. #GreatLakes pic.twitter.com/cixp0MpZOF

​Iron ore and coal is transported across them to supply steel mills and large quantities of manufactured goods are exported by ships up to 1,000 foot long from Chicago, Milwaukee, Detroit, Toronto, Cleveland and other cities.

In the past ice was a major problem for shipping and up until the 1960s the lakes would shut down in the winter.

In William Ratigan’s 1960 book, Great Lakes: Shipwrecks and Survivors, he writes: “Ever since Captain Jack Wilson…took the first boat, the sidewheel steamer Illinois, through the Soo Canal in 1855, the traditional season of navigation on the upper Great Lakes measured from April breakup to December freezeup.”

In the late 1960s and early 1970s, urged on by industrial interests, the US Coastguard launched Operation Taconite and used more powerful icebreakers like the Mackinaw to force open a passage for shipping.

The start of the close season was gradually pushed back and by 1974 it had reached 7 February.

The National Oceanic and Atmospheric Administration (NOAA), a federal agency, began monitoring ice levels on the Great Lakes in 1973 and has noticed evidence of climate change.

Jia Wang, an ice climatologist at the NOAA’s Great Lakes Environmental Research Laboratory, said: "In the raw data there is evidence of global warming."

© Photo : NOAA/GLERL
A map showing ice cover in the Great Lakes in December 2020

Dr Wang said ice levels on the Great Lakes were affected by cycles, such as El Niño and the North Atlantic Oscillation and he told Sputnik: "If you remove these cycles you can see the trend, overall ice cover has gone down by six percent per decade."

Dr Wang said in 2014/15 the weakness of El Niño led to a cooling of the air temperature in North America which led to 90 percent of the Great Lakes being iced over that winter.

This winter there is very little ice on the Great Lakes, with only small areas in Lake Huron’s Saginaw Bay and Lake Michigan’s Green Bay iced over and Dr Wang said: "We predict maximum ice cover will be 28 percent."

© Photo : NOAA/GLERL
The majority of the Great Lakes is ice-free, a far cry from how things were in the 1960s

The Saint Laurence Seaway - which links the lakes to the North Atlantic - closes during the harshest winter months and the Soo Locks, between Lake Superior and Lake Huron, close between 15 January and 25 March, largely to enable maintenance to be carried out.

The Environment Law & Policy Center published a report last year which said the most common indigenous species in the Great Lakes, lake whitefish (coregonus clupeaformis) “likely have been affected by climate change.”

The report said: "Lake whitefish spawn in nearshore zones in late fall, their eggs incubate overwinter on the bottom, and larvae hatch out in early spring…in years with warm winters and low or no ice cover nearshore, egg survival is poor…Reductions in ice cover in Great Lakes nearshore areas are correlated with declines in reproductive success and abundance of lake whitefish."

But conservationists have other concerns too.

So excited to hear the #GreatLakesRestorationInitiative #GLRI was signed into law, boosting funding from $300 million to $475 million. Almost every project I have worked on in my professional career has been funded by GLRI and it continues to be an amazing driver for our work.

​Invasive species such as zebra and quagga mussels - from Europe - snakehead fish and Asian carp all pose a threat to lakeland wildlife.

The GLRI has funded nearly 5,500 projects targeting invasive species as well as toxic industrial pollution in harbours and tributary rivers.

Laura Rubin, director of Healing Our Waters-Great Lakes Coalition, said recently: "Over the past decade, the Great Lakes Restoration Initiative has been producing results for communities across the region, but serious threats remain. This bill recognises the work we have left to do, and allows Congress to boost funding to tackle these threats before they get worse and more expensive to solve."

A Michigan judge has denied a controversial wetlands permit for the Back Forty mine.

“The Judge’s decision confirms the Menominee Tribe’s concerns about the threats of the Back Forty Mine project...." said Joan Delabreau, the Menominee tribe's chairwoman in a statement.

​In another victory for conservationists, a Michigan judge on Tuesday, 6 January, threw out approval of a permit for an open-cast mine in the state’s Upper Peninsula.

A Canadian company had wanted to mine for gold and zinc at the Back Forty mine but environmental groups and the Menominee Indian tribe from neighbouring Wisconsin believed the mine would harm wetlands and expose the river to acidic run-off.

Conservationists and climate change campaigners in the Great Lakes region will no doubt be looking forward to 20 January, when the White House sees the back of President Trump, who has virtually ignored climate change and once said: "The concept of global warming was created by and for the Chinese in order to make US manufacturing non-competitive."