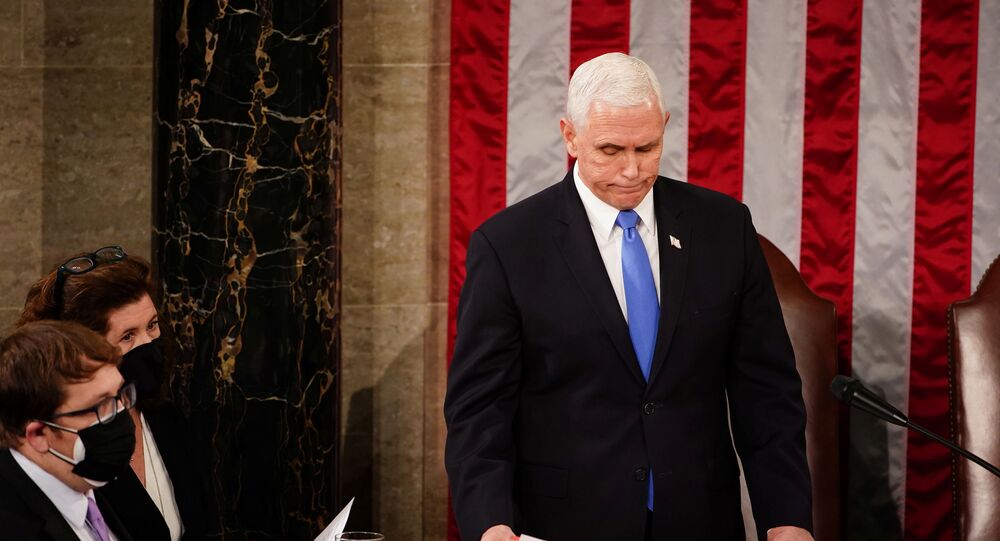 Netizens have explained that the line was trending because videos kept being retweeted showing violent protesters chanting the very same phrase in front of the US Capitol.

​While many users have actually found it disturbing, the tweets containing the line reached the number of 14,000. It had reportedly been one of the trending topics for hours before Twitter finally halted it.

WTF why is this allowed to trend?

I get that people have been tweeting it to quote some of the insurrectionists but it shouldn't be allowed to trend. pic.twitter.com/HTlSYnoB5y

​On January 6, rioters in Washington, DC, called for "hanging" VP Pence from a tree as a "traitor". Trump had placed high hopes on Pence that he would help him overturn Joe Biden's victory in the presidential election. For over two months, the US president has been fighting for what he called the "legitimate results" of the election, insisting massive voter fraud took place on November 3. However, media reported that prior to 6 January, Pence told Trump he did not have the power to block the congressional certification of Biden's win.

What's more, photos emerged on social media with a noose placed on a wooden frame on the West Front of the Capitol, apparently "designed" for the vice president, as he was presiding over the congressional certification of the 2020 election results.

It is in fact against the law to threaten the lives of a US president or vice president, and could lead to a fine or a prison sentence of up to five years.

Twitter blocked Trump's account on Friday citing fears that he might further use the platform to incite violence. In the wake of the DC riots, numerous lawmakers accused Trump of provoking the violence, in which his supporters stormed the US Capitol building in order to stop the congressional certification of the 2020 election results.

"After close review of recent Tweets from the @realDonaldTrump account and the the context around them we have permanently suspended the account due to the risk of further incitement of violence", the company said.

Following the ban, Trump said via his official account, @POTUS, that he won't be silenced, adding that he is mulling creating his own network to keep up with Americans. However, it took Twitter a few moments to delete these tweets, before suspending the account, but this time, temporarily.

Shortly before the ban, Trump announced he would not be attending Biden's inauguration on January 20. The latter, however, described it as a "good thing", while saying that VP Pence was "welcome".