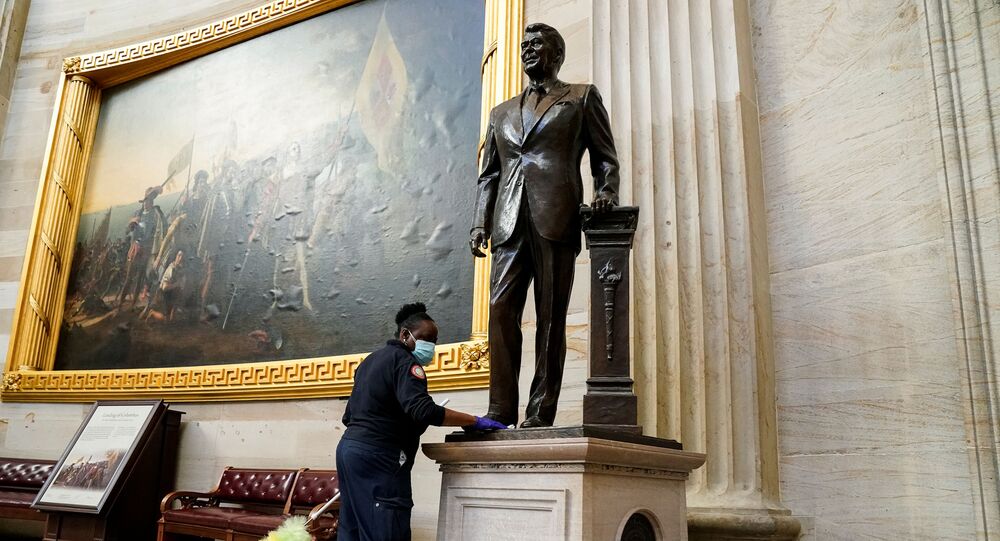 WASHINGTON (Sputnik) - A federal court in the US District of Columbia charged three men over Wednesday’s unrest at the Capitol building, including the widely publicized man with horns and fur headdress, a statement from the DC Attorney General’s Office said Saturday.

According to the statement, the man seen carrying away Speaker Nancy Pelosi’s podium and a lawmaker from the state of West Virginia were also charged with violent entry and disorderly conduct.

“Jacob Anthony Chansley, a.k.a. Jake Angeli, of Arizona, was charged with knowingly entering or remaining in any restricted building or grounds without lawful authority, and with violent entry and disorderly conduct on Capitol grounds,” the Attorney General’s office said.

The other accused was identified as Adam Johnson, 36, from Florida, who faces similar charges in addition to one count of theft of government property.

Derrick Evans, the third accused, a recently elected member of the West Virginia House of Delegates, live-streamed his entrance into the Capitol while shouting “We’re in, we’re in! Derrick Evans is in the Capitol!”. The lawmaker has apparently submitted his resignation in the wake of the events.

BREAKING: Derrick Evans has resigned from the House of Delegates in the wake of his alleged involvement in the US Capitol chaos. His official resignation letter, posted below, was clear and concise. 👇🏼 pic.twitter.com/jhP9AyohXs

Chansley was arrested today while the latter two were taken into custody on Friday, according to the statement.

Chansley confirmed to the FBI that this was him, according to the charging documents. pic.twitter.com/0P2LDV2M2u

More than 50 people have already been charged with across the US in connection with the events that unfolded in Washington January 6, the US Department of Justice said a day priot.

Five people died as a result of the violent entry into the Capitol complex Wednesday when the Senate was in session to certify the result of the presidential election. President Donald Trump, widely derided as having fomented the unrest, has been blocked on major social media platforms, while Democratic lawmakers have begun a motion to remove him from office.