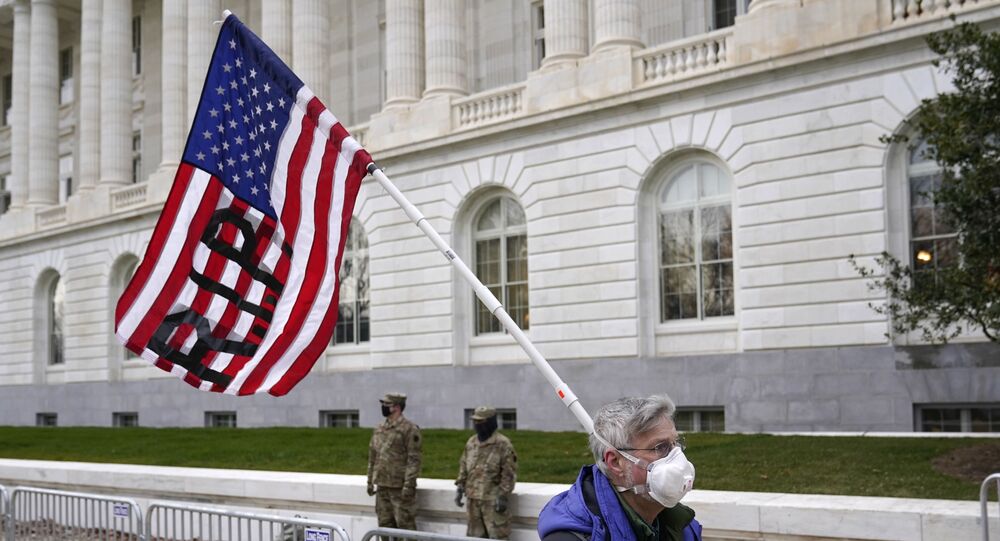 On Wednesday, thousands of Trump loyalists stormed the Capitol as Congress debated the formal certification of Joe Biden as president. The unprecedented images coming out of Washington, DC sent shockwaves throughout the world, with angry Democrats demanding Donald Trump’s immediate removal from office and threatening fresh impeachment proceedings.

Washington, DC Metropolitan Police have released the names of three previously unidentified protesters who died in the wake of this week’s violence at the Capitol. Here is what is known about all five individuals whose lives were cut short.

Ashli Babbitt was the first of the protesters to be identified following her fatal shooting by a Capitol police officer on Wednesday afternoon. Babbitt was a 14-year veteran of the US Air Force, a resident of San Diego, and an avid Trump supporter.

Shortly before her death, after reading a report that authorities were cancelling flights into Washington, DC ahead of Trump’s ‘Stop the Steal’ rally, Babbitt tweeted that “nothing will stop us”, saying “they can try and try and try but the storm is here and it is descending upon DC in less than 24 hours…dark to light!”

Babbitt died in hospital after being shot while trying to climb through a window into the Capitol complex, with the officer who shot her put on administrative leave pending an investigation.

Officer Brian Sicknick was the second person identified who died as a result of Wednesday’s violence, passing away Thursday night in hospital after “physically engaging with protesters” inside the Capitol complex.

According to Capitol Police, Sicknick, a 12-year-veteran of the force, managed to return to his division office independently, where he collapsed and was taken to local hospital. According to media reports, Sicknick may have died after suffering a blow to the head with a fire extinguisher wielded by a protester.

The Police and the FBI have launched a joint probe into the case, with the US attorney’s office taking steps to open a formal murder investigation.

Boyland, a Trump supporter from Kennesaw, Georgia, died of an unspecified medical emergency which family members revealed was likely the result of being trampled to death during the unrest.

In a statement, brother-in-law Justin Cave described Boyland as someone who was “very passionate about her beliefs”, but blamed Trump’s rhetoric for the violence which led to her death. “It is my own personal belief that the president’s words and rhetoric incited a riot last night that killed four of his biggest fans, and I believe that we should invoke the 25th Amendment”, he said in a statement to reporters.

Heartbreak. Exclusive reaction from Rosanne Boyland's family after finding out the 34-year-old Kennesaw woman was likely crushed to death during the unrest at the US Capital yesterday. @FOX5Atlanta pic.twitter.com/dxLvLRn0bF

Boyland was believed to have had run into trouble with the law on repeated occasions in the past, with a rap sheet including drug charges, obstruction of law enforcement, battery and trespassing.

Rosanne Boyland, 34, from Kennesaw, Georgia was trampled to death during the riot at the US Capitol carrying a flag reading: "Don't tread on me"https://t.co/gpIr4BCn9P pic.twitter.com/tWYQM8ex3z

Greeson was a Trump supporter from Athens, Alabama. He died of unknown causes during Wednesday’s events, with his family saying his high blood pressure may have contributed to a fatal heart attack.

Greeson’s wife Kristi said her late husband did not travel to Washington “to participate in violence or rioting,” and said he did not “condone such actions.” In a statement, the family described him as a “wonderful father and husband who loved life.”

Greeson's family has released the following statement, along with this photo: pic.twitter.com/fOEQjLJrJQ

Unsubstantiated rumours spread online by Trump’s detractors alleged that Greeson died after accidentally tasering himself repeatedly in the genitals.

Benjamin Philips was a computer programmer from Schuylkill County, Pennsylvania, and was a Trump supporter who helped organise a caravan of other Trump supporters from his state. Philips died at an unknown point ahead of or during the siege, with several of the people who had joined him informed by police that he had suffered a stroke and died at George Washington University Hospital Wednesday evening. Philips was survived by two children and an estranged wife.

According to media, Philips’ activism including creating several pro-Trump websites. Just hours before his death, he told a reporter that “there needs to be more uncensored spaces” online, and that he envisioned “a whole network of niche social networks based on interests” because Twitter and Facebook “hate” Trump supporters and “don’t need us there”.

I took a bus from Harrisburg to DC with Trump supporter and trip organizer Ben Philips yesterday. As he drove down, he told me: "It seems like the first day of the rest of our lives."

He died in DC yesterday. My story:https://t.co/DQ5h4AV8aO

Over 50 Capitol and D.C. police officers and an unknown number of protesters were injured, with 82 people arrested, in the aftermath of Wednesday’s violence. The assault prompted federal authorities to activate the National Guard, and Washington, DC Mayor Muriel Bowser extended a state of emergency in the city until the day after the inauguration. Democrats accused Trump of inciting the storming of the Capitol, even as the president urged supporters to “go home.” On Thursday, Trump recorded a brief address in which he formally conceded the November election and promised an “orderly” transition.