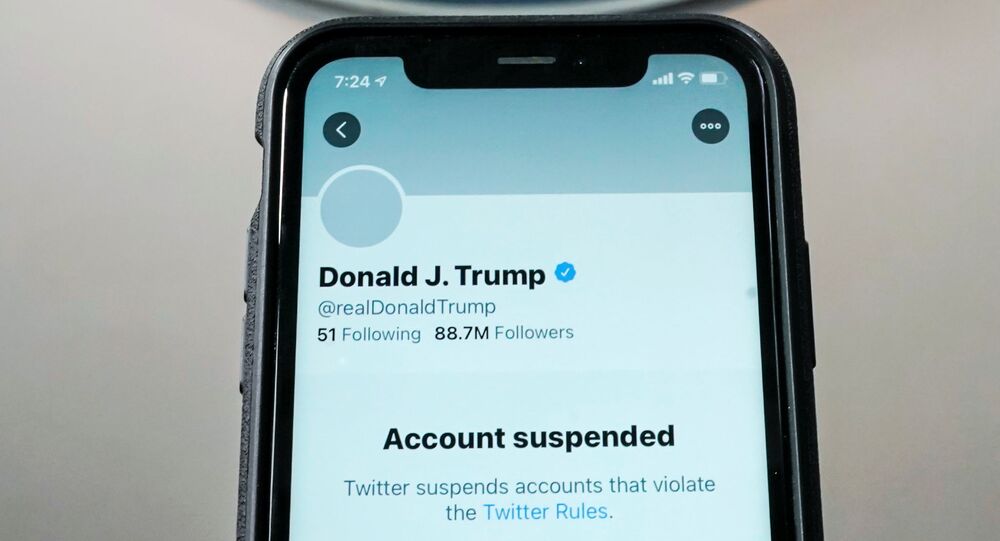 After Donald Trump was accused by Democrats of ‘inciting’ his supporters to violently breach the US Capitol on 6 January, Twitter took the major step on Friday of permanently banning the President’s @realdonaldtrump account, with the POTUS slamming the micro-blogging site for conspiring with his political opponents.

Donald Trump has enjoyed a rocky, love-hate relationship with Twitter, since he embarked upon his presidency on 20 January 2017, when he was inaugurated as the 45th president of the United States.

Since joining the microblogging and social networking service in 2009, Trump is estimated to have delivered over 59,553 tweets or retweets and accumulated over 88 million followers, according to the social analytics company Social Blade.

The platform has been wielded by Donald Trump to bypass the media and speak directly to voters. Tweeting in a ‘broad brushstroke’ style, he has since used Twitter to hire and fire staff, tout ostensible victories at the national and international level, goad his perceived adversaries and denounce allegations against him.

Twitter, in turn, reaped its share of rewards from the symbiosis, as it became the go-to place to keep track of the latest musings from the President of the United States.

All of this has now come to an abrupt halt.

Twitter announced on 8 January that after briefly blocking Donald Trump’s use of their social media app earlier in the week, it was banning the US President from the platform for good "after close review of recent Tweets from the @realDonaldTrump account".

The company cited fears that the President could use the platform to ‘incite’ followers to further acts of violence in the wake of the Capitol mayhem.

On 6 January thousands of Trump supporters breached the US Capitol building, where Congress had convened to certify the Electoral College vote and officially declare President-elect Joe Biden the winner of the 3 November 2020 election.

The violent standoff with law enforcement resulted in five people dying and dozens being arrested, as Democrats were swift to point the finger of blame at Donald Trump.

They claimed the ‘insurrection’ had been ignited by Trump’s repeated assertions, at a rally in Washington preceding the Capitol events, that the election had been ‘stolen’ from him due to massive ‘voter fraud’.

While the POTUS did not explicitly urge any of his supporters to engage in violent activity, urging them to act "peacefully" and further tweeting a call for them to "stay peaceful", his words have been construed as a deliberate ‘egging on’ of those who espoused his stance regarding the outcome of the 2020 election.

Twitter removed three tweets from the account of President Donald Trump on 6 January and suspended his account for 12 hours after he called the people who stormed the US Capitol "patriots".

The tweets came hours after Trump released a pre-recorded video decrying the violence in the US Capitol as un-American.

"The demonstrators who infiltrated the Capitol have defiled the seat of American democracy... "To those who engaged in the acts of violence and destruction, you do not represent our country. And to those who broke the law, you will pay."

“The demonstrators who infiltrated the Capitol have defiled the seat of American democracy. To those who engaged in the acts of violence and destruction, you do not represent our country, and to those who broke the law, you will pay.”

​Amid reports of the riots, and an evacuation of lawmakers including Vice President Mike Pence, Trump released a video addressing the rioters, where he called for the mob to disperse. He also told his supporters that they were "very special," adding: "We love you."

The company had warned that further violations of its rules "will result in permanent suspension" of the president’s Twitter account.

BREAKING: Twitter has permanently suspended President Trump’s account, claiming the decision was made “due to the risk of further incitement of violence” because of how Trump’s Tweets “are being received and interpreted on and off Twitter.” pic.twitter.com/bbvCt6HA6W

​"After close review of recent Tweets from the @realDonaldTrump account and the context around them we have permanently suspended the account due to the risk of further incitement of violence," Twitter said on Friday evening, adding:

"In the context of horrific events this week, we made it clear on Wednesday that additional violations of the Twitter Rules would potentially result in this very course of action."

Twitter's decision followed two tweets by Trump on Friday afternoon. Fated to be his last, the tweets were slammed as violating the company's policy against ‘glorification of violence’.

“These two Tweets must be read in the context of broader events in the country and the ways in which the President's statements can be mobilized by different audiences, including to incite violence, as well as in the context of the pattern of behavior from this account in recent weeks," said the company.

The first tweet by Trump stated that the “75,000,000 great American Patriots who voted for me” would have a “GIANT VOICE long into the future”. In the second tweet the president indicated he planned to skip Joe Biden's inauguration.

Twitter regarded the tweet as a further proof that the president regarded the 2020 election as ‘not legitimate’.
The company warned it intended to enforce its policy against ban evasions.

Nevertheless, this policy was tested as at 8:30 pm ET Friday evening either Trump or someone acting on his behalf published four tweets from the @POTUS account.

"As I have been saying for a long time, Twitter has gone further and further in banning free speech, and tonight, Twitter employees have coordinated with the Democrats and the Radical Left in removing my account from their platform, to silence me," said the tweet.

"As I have been saying for a long time, Twitter has gone further and further in banning free speech, and tonight, Twitter employees have pic.twitter.com/4bNbbKPhV5

​The President continued to say in a series of now-removed tweets on @POTUS that “We will not be SILENCED! Twitter is not about FREE SPEECH.”

The same exact three-tweet message was posted on the Trump campaign's account, @TeamTrump, which has since also been suspended.

Trump followed up by hinting he would have a “big announcement” coming soon regarding Section 230 and intimated he was considering creating his “own platform in the near future”.

“The accounts have been suspended in line with our policy on Coordinated Harmful Activity," a Twitter spokesperson was cited as saying by NBC News.

Both Watkins and Powell have been underscoring claims pertaining to Dominion Voting Systems and its role in the US elections, with Powell sued on Friday by the company, that has rejected all allegations against it.

The Twitter team has also issued a warning, cited by the Verge, that Donald Trump would not be able to avoid the ban by posting from other government accounts as his tweets would be immediately deleted, and if he tries to create new accounts they would also be suspended “at first detection”.