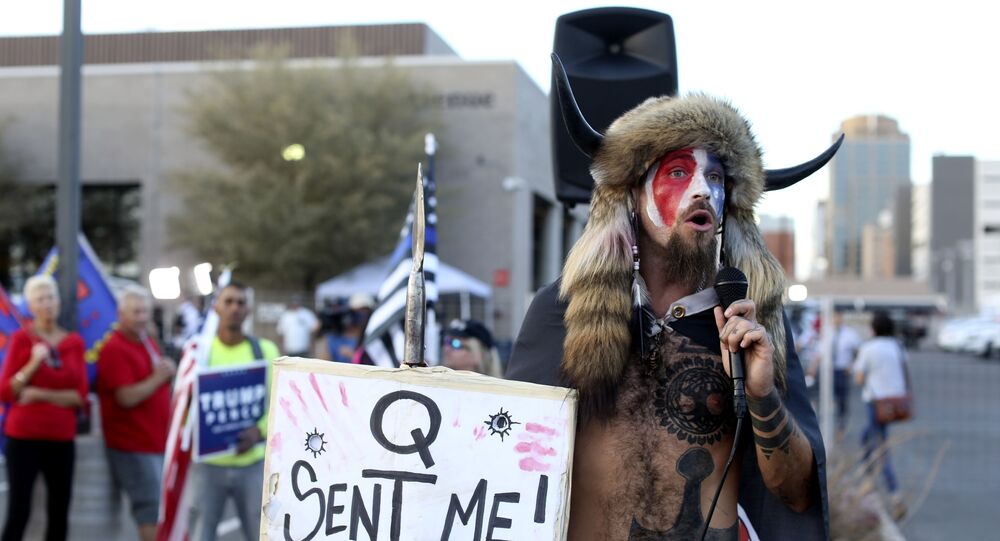 The move preceded Twitter's permanent suspension of Donald Trump's account after the president was vastly accused of being responsible for provoking violence in DC, as thousands of Trump supporters stormed US Capitol on Wednesday.

On Friday Twitter permanently suspended the accounts of former national security advisor Michael Flynn, Sidney Powell, the pro-Trump lawyer who promised to "release the Kraken" on the election fraud allegations, and former 8kun imageboard administrator Ron Watkins. The move was made as part of measures to suppress content allegedly linked to the QAnon conspiracy theory, The Hill reported on Friday.

In accordance with the Twitter policy against harmful organized behavior, each of the individuals was banned, the report states, citing the spokesperson of the social media company.

"We’ve been clear that we will take strong enforcement action on behavior that has the potential to lead to offline harm, and given the renewed potential for violence surrounding this type of behavior in the coming days, we will permanently suspend accounts that are solely dedicated to sharing QAnon content," the spokesperson added.

According to the report, Trump's first national security advisor Flynn has been one of the most visible QAnon supporters, posting a video of himself reciting one of its "oaths" last summer.

Powell, who acted in favor of Trump’s unsuccessful attempts to challenge the results of the 2020 presidential election, reportedly was sued for $1.3 billion earlier Friday for spreading misinformation about Dominion Voting Systems, the company that provided the voting machines that were criticized during the election.

Watkins is also considered a key figure in spreading allegedly false information about the company. The platform where he used to administrate is still a hosting place for posts made by "Q", the anonymous figure writing cryptic messages that are regarded by some as the foundation of the whole conspiracy theory.

© AFP 2020 / OLIVIER DOULIERY
Google Suspending US Microblogging and Social Networking Service Parler From Play Store
According to the report, 8kun changed its name from 8chan after it was used to post manifestos of mass murderers, including the shooter in El Paso, Texas, that in 2019 killed 17 people.

This is not the first time Twitter has taken steps against QAnon, as it conducted an operation blocking thousands of accounts related to the conspiracy in July. However, many major accounts were reportedly unaffected or evaded bans.

Adherents of the QAnon conspiracy theory believe that Trump is trying to uncover a hidden cabal of insiders in Democratic politics and the mainstream media that is secretly run by pedophiles, leading underground child trafficking rings. Q, who is considered to be the group of authors working behind one account, has also claimed that North Korean leader Kim Jong-un was installed by the CIA and that the Rothschild family leads a satanic cult.

According to numerous media reports, supporters of the theory were involved in Wednesday’s mayhem at the US Capitol, with some of them even breaching the building and the chambers.