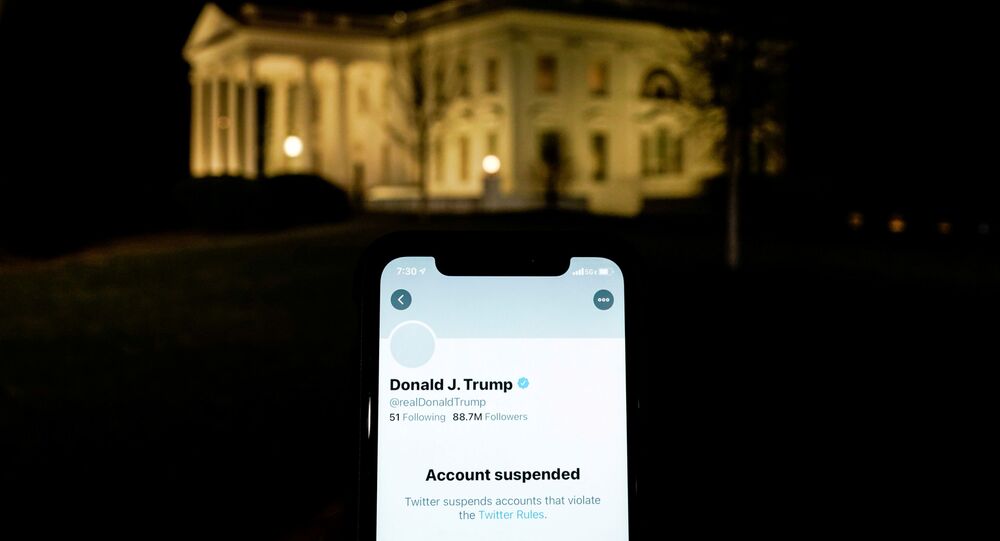 After briefly blocking his use of their social media app earlier this week, Twitter permanently banned US President Donald Trump from the platform on Friday citing fears he could use it to incite followers to further acts of violence.

The social media giant announced on Friday that Trump's personal Twitter account would remain forever suspended after the company's Safety department conducted a thorough review of both the content of Trump's recent posts as well as how they were being received by other users.

As a follow-up, the company also suspended the Trump campaign's account, @TeamTrump.

BREAKING: Twitter has permanently suspended President Trump’s account, claiming the decision was made “due to the risk of further incitement of violence” because of how Trump’s Tweets “are being received and interpreted on and off Twitter.” pic.twitter.com/bbvCt6HA6W

"In the context of horrific events this week, we made it clear on Wednesday that additional violations of the Twitter Rules would potentially result in this very course of action. Our public interest framework exists to enable the public to hear from elected officials and world leaders directly. It is built on a principle that the people have a right to hold power to account in the open," the company wrote on its blog on Friday.

"However, we made it clear going back years that these accounts are not above our rules entirely and cannot use Twitter to incite violence, among other things. We will continue to be transparent around our policies and their enforcement," the blog continues.

The post goes on to detail several of Trump's recent tweets, explaining how in the context of recent events, Trump's language amounts to "glorification of violence," which is against Twitter's rules.

Following the move, Trump said that he was looking at “building out our new platform in the near future”. The president has heavily relied on this very social media platform to communicate with the public throughout his presidency, having garnered nearly 90 million followers on his account.

"We have been negotiating with various other sites, and will have a big announcement soon," he said, according to one of the screenshots.

Trump returns, on the @POTUS account, and says he is looking "at the possibilities of building out our own platform in the near future." pic.twitter.com/AhbICQ82OM

According to Twitter, Trump's earlier tweet that his supporters have a “GIANT VOICE long into the future” and that “They will not be disrespected or treated unfairly in any way, shape or form!!!” is being interpreted as a further indication that he does not plan to facilitate an orderly transition.

Moreover, Twitter said they have seen plans for future armed protests have begun to circulate on and off Twitter, including a second attack on the US Capitol and state capitol building on January 17.

Additionally, Trump's earlier tweet that he will not be attending President-elect Joe Biden's inauguration on January 20 could reportedly serve as an encouragement to individuals potentially considering violent acts that the Inauguration would be a “safe” target since he will not be there.

Twitter's decision comes after Trump's account was temporarily shut down on Wednesday until 12 hours after he deleted three posts that Twitter described as "repeated and severe violations of our Civic Integrity policy." The tweets seemed to glorify the violence that occurred earlier in the day at the US Capitol, where throngs of his supporters stormed the national legislature in a bid to block certification of election results Trump has claimed are fraudulent.

This is one of President Trump's tweets that Twitter deleted pic.twitter.com/lv8bbJi0Ys

"Future violations of the Twitter rules, including our Civic Integrity or Violent Threats policies, will result in permanent suspension of the @RealDonaldTrump account," Twitter Safety said at the time.

Trump deleted the tweets and his account was returned to his control on Thursday. However, the incident caused Twitter's share value to decline by 1.8% afterward, although Barron's reported that was also related to perceived poor user performance by stock traders that was unconnected to the events at the Capitol.

Five people died in the insurrection and hundreds have been arrested, while thousands of National Guard troops have been stationed in and around Washington, DC, to ensure a smooth transition of power from Trump to US President-elect Joe Biden on January 20. House Democrats have pledged to open impeachment proceedings against Trump for incitement to insurrection next week.

Trump's troubles with Twitter rules began in the Spring of 2020 when the company flagged two May 27 tweets of his claiming mail-in ballots are inherently fraudulent and that if their use were widespread in an election it would delegitimize that election. Twitter added an information button below his tweets saying "get the facts about mail-in ballots."

Trump criticized Twitter for trying to "silence conservative voices" with the fact-checking tab and accused the company of meddling in the 2020 election, threatening to "strongly regulate or close them down."

Then, just days later, after militant protests against police brutality and anti-Black racism exploded across the country, Trump's tweets were flagged again for glorifying violence after he threatened protesters in Minneapolis, Minnesota, with the phrase "when the looting starts, the shooting starts."

Twitter/Sputnik Screenshot
A tweet issued by Donald Trump on May 29, 2020 at 12:53 a.m. EST. It was flagged on the same day by Twitter for "glorifying violence."

“We’ve taken action in the interest of preventing others from being inspired to commit violent acts, but have kept the Tweet on Twitter because it is important that the public still be able to see the Tweet given its relevance to ongoing matters of public importance,” Twitter added below his tweet, blocking the public from interacting with it on the platform.

Trump's tweets were flagged numerous times between then and November for everything from containing "deepfake" videos to "spreading misleading and potentially harmful information related to COVID-19." However, the frequency greatly increased around the time of the November 3, 2020, election.

A few days before the election, on October 27, Trump's tweet about alleged discrepancies and problems with mail-in ballots got flagged by Twitter with the line: “Some or all of the content shared in this Tweet is disputed and might be misleading about how to participate in an election or another civic process."

The flag became a regular appearance on the president's account over the next two months as Trump refused to concede results of the election showing his Democratic rival, now-US President-elect Joe Biden, as the winner, and claimed the results were fabricated by Democratic conspirators in several key battleground states. His posts alleging failures in voting machines and other misdeeds earned him rebuke not only from Twitter, but from his own Department of Justice and Cybersecurity and Infrastructure Security Agency, both of which rejected his claims.

In response to Twitter's moves, Trump again raised a call for Section 230 of the Telecommunications Act of 1996 to be revoked, which he also demanded during previous rebukes on social media. The provision protects internet companies from liability related to content hosted on their sites by third parties, meaning they don't have to edit the content on it. Trump maintained that if companies like Twitter and Facebook were going to do so, then they should be able to be held accountable for how they do it.

Trump attempted to get the removal added to the 2021 National Defense Authorization Act, the Pentagon's colossal annual funding bill, but when lawmakers sent it to his desk without a provision for removing Section 230, he vetoed it. Congress subsequently overrode his veto in the opening days of 2021 - the first time in his four-year presidency he received such a rebuke.