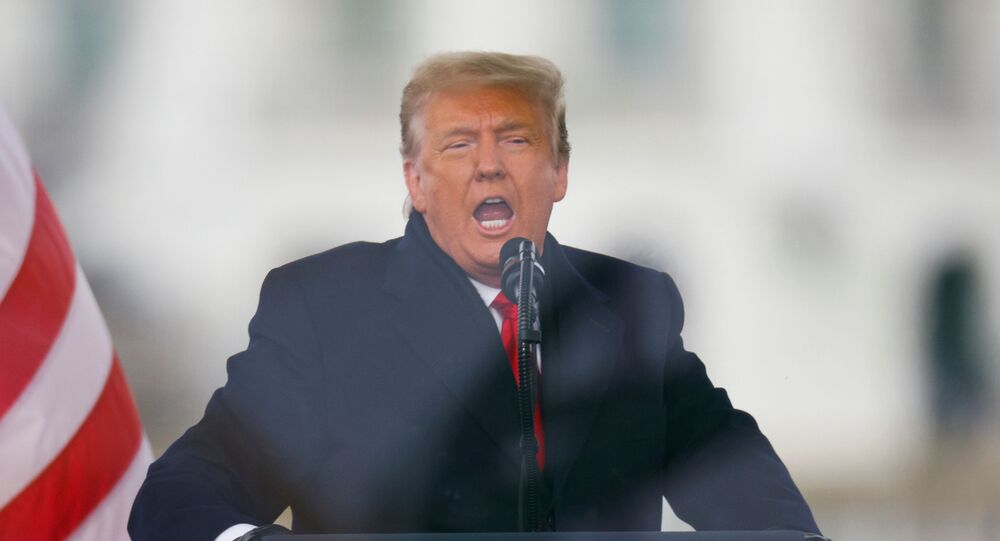 A top US federal prosecutor on Thursday remarked to reporters during a conference call that investigators had not fully ruled out the possibility of slapping US President Donald Trump with inciting violence charges after his repeated remarks at a Wednesday rally emboldened his supporters to storm the US Capitol.

Officials with the US Department of Justice announced Friday that they did not anticipate filing incitement charges against Trump or any other individuals who spoke at the "Stop the Steal" rally that was held hours before pro-Trump rioters made their way to the US Capitol.

The revelation was declared via a conference call with reporters by Ken Kohl, the acting principal assistant for the US attorney's office in Washington, DC.

“We don’t expect any charges of that nature,” Kohl said when asked during a phone briefing to elaborate on the possibility “that the president or the people who were on the stage with him at that rally could face potential charges related to inciting violence.”

Kohl's clarification came after acting US Attorney for the District of Columbia Michael Sherwin told reporters on Thursday that the Justice Department was ready to file charges against "anyone who had a role" in the Wednesday riot. At the time, when asked whether charges would be extended to Trump, Sherwin stressed that investigators were eyeing "all actors."

Hours before the Capitol siege, Trump told supporters at the DC rally that he refused to concede the US election and called on the thousands of followers to keeping fighting to prevent the election from being "stolen." At the time of Trump's bold remarks, congressional lawmakers were preparing to begin the certification of the Electoral College votes.

It wasn't too long after Trump's commentary that thousands of supporters eventually made their way to the US Capitol, breached security barriers and ransacked the federal building. Video footage of the scene shows rioters breaking down windows and doors, invading the offices of lawmakers and even taking with them congressional items.

A Thursday statement from the US Capitol Police noted over 50 officers had received injuries, and that rioters had attacked officers with metal pipes, chemical irritants and a variety of "other weapons."

At the height of the destruction, Trump issued a since-deleted video address via Twitter that called on supporters to leave the grounds; however, the message also continued to voice unsubstantiated claims that voter fraud caused Trump to lose his second bid for the White House.

It wasn't until hours later, after the National Guard and back-up police forces from neighboring jurisdictions arrived at the Capitol, that Trump decided to condemn the violent riots that had overtaken the Capitol. In a new address, Trump said rioters "defiled the seat of American democracy," and that moving forward, he would be focusing his attention on "ensuring a smooth, orderly and seamless transition of power" to the incoming administration of US President-elect Joe Biden.

In light of the siege and Trump's central role in encouraging supporters to prevent the theft of the election, multiple lawmakers have called for Trump to be removed from office either through impeachment proceedings or by invoking the 25th Amendment.

However, with US Vice President Mike Pence not on board with using the 25th Amendment to remove Trump, lawmakers have decided on drawing up impeachment proceedings, which would mark the second time that officials have done so during Trump's four years in the White House. The latest reports from Reuters indicate that at least one of the articles of impeachment against Trump related to the riots will be introduced in the US House of Representatives on Monday.