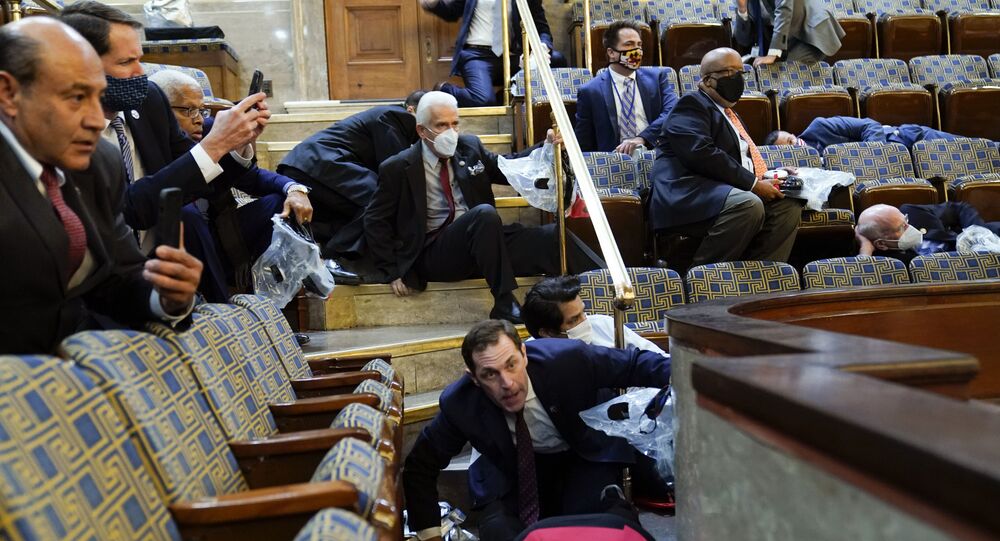 On Thursday, Senate Minority Leader Chuck Schumer, who is expected to become majority leader later this month, similarly urged Congress to reconvene for emergency impeachment proceedings against Donald Trump if Vice President Pence and other members of the cabinet don't "stand up" and take immediate action.

Democratic Assistant House Speaker Katherine Clark has urged Vice President Mike Pence to remove Trump, and threatened that the House would start impeachment proceedings by the middle of next week if he fails to do so.

"If reports are correct, and Mike Pence is not going to uphold his oath of office and remove the president and help protect our democracy, then we will move forward with impeachment to do just that," Clark said, speaking to CNN on Friday.

"Congress can act very quickly when they want to," she added.

The congresswoman suggested that American democracy would be "damaged" if the president wasn't held accountable by being removed from office.

Before the interview, Clark spent the past 48 hours calling Trump a "traitor" on Twitter and accusing his supporters of a "seditious attempt to overthrow our democracy" over the unrest at the Capitol. She also urged the FBI to investigate Trump "and his 128 co-conspirators in the House and Senate" (i.e. those lawmakers who expressed opposition to certifying the election in Joe Biden's favour) for Wednesday's violence.

Just hours after Wednesday's violence at the Capitol, Democratic Representative Ilhan Omar of Minnesota announced that she was "drawing up" articles of impeachment against the president. On Thursday, Democratic Senate Minority Leader Chuck Schumer urged Trump's cabinet to oust him immediately, saying the Republican president "should not hold office one day longer" and that Congress "should reconvene to impeach" if the cabinet fails to act by invoking the 25th Amendment to the US Constitution, which allows for a president to be declared unfit for office. Democratic House Speaker Nancy Pelosi made a similar demand, accusing Trump of calling on his supporters to carry out a "seditious act."

© AP Photo / Alex Brandon
Pompeo, Mnuchin Discuss Invoking 25th Amendment on Trump, But Abandon the Idea, Report Says
Also on Thursday, US media reported, citing sources, that Secretary of State Mike Pompeo and Treasury Secretary Steve Mnuchin discussed invoking the 25th Amendment before abandoning the idea, supposedly because it would take too long to implement and due to legal questions about whether acting secretaries could vote in the removal proceedings.

Late Thursday, Trump released a short video address in which he condemned the assault on the Capitol, and formally acknowledged that a "new administration would be inaugurated" on 20 January, committing to "ensuring a smooth, orderly and seamless transition of power."

"My campaign vigorously pursued every legal avenue to contest the election results. My only goal was to ensure the integrity of the vote. In so doing, I was fighting to defend American democracy. I continue to strongly believe that we must reform our election laws to verify the identity and eligibility of all voters, and to ensure faith and confidence in all future elections," Trump said, referring to his two-month long campaign contesting the election, which riled up his supporters to storm the Capitol on Wednesday.

Can Trump Be Removed Before 20 January?

© AP Photo / Jacquelyn Martin
As Calls for Trump's Ouster From Office Grow, How and When Can the 25th Amendment be Triggered?
Doubts linger whether Trump can actually be removed from power by Inauguration Day, either via the 25th Amendment or new impeachment proceedings. The constitutional amendment is open to interpretation, and does not offer a clear-cut description of what qualifies as an "inability to serve" in the absence of a serious malady, such as being in a coma or suffering a stroke.

As for an impeachment, the Democratic Party already tried that in late 2019, bringing Trump up on charges of abuse of power and obstruction of Congress over his attempt to pressure Ukraine to investigate alleged pay-to-play corruption by the Biden family in that country. The Democrat-controlled House successfully impeached Trump, but the Republican-controlled Senate acquitted him in February 2020. A conviction in a new impeachment trial would require a two-thirds majority in the Senate. Senate runoff elections in Georgia this week saw Democrats defeating their Republican rivals, with the chamber now expected to be split 50-50 between Republicans and Democrats and independents caucusing with Democrats.

Congress has never successfully convicted a president who has been impeached in its 231-year history.