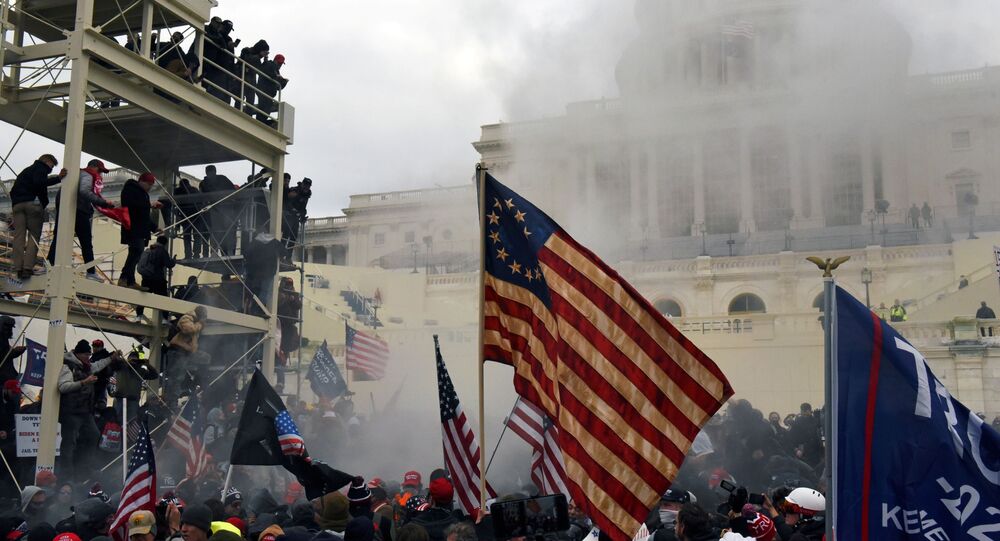 The US Capitol was plunged into chaos on Wednesday after Donald Trump spoke at a rally while a joint session of Congress met to formally certify the final electoral college vote, with POTUS supporters breaching the building and triggering a lockdown. According to Washington, DC police, the unrest left five dead; dozens were arrested.

Civil rights attorney Leo Terrell has pushed back at the Democrats for pointing the finger of blame at Donald Trump for the US Capitol mayhem that left five people dead and dozens arrested.

The tragic events that unfolded at the symbolic epicentre of US democracy in Washington, DC were being wielded by the Democrats to push ahead with their agenda and baselessly hold President Trump responsible for what has been described as an ‘insurrection’, claimed Terrell on "Bill Hemmer Reports" on Thursday.

President-elect Joe Biden was also dealt a tongue lashing for saying earlier that Trump was culpable of "inciting a mob to attack the Capitol", while he had never urged anyone to be violent.

As Fox News correspondent Geraldo Rivera denounced Donald Trump’s perceived role in egging on the protesters, claiming that ‘blood is on the hands’ of the president, Terrell accused him of parroting ‘Democratic talking points’.

"The president must man up, he lost this election… It’s over, now he has to help calm this country,” Rivera had said, prompting the civil rights attorney to respond:

"All Donald Trump said yesterday was go down to the Capitol building ... I listened to the Democratic Kool-Aid, you heard Joe Biden today, [Washington D.C. Mayor] Muriel Bowser, they are using this for Democratic talking points."

The attorney heatedly prevented any interruption from Rivera, adding:
"All President Trump did, and he has the First Amendment right ... is to express his disappointment. He did not order those individuals to go down there and destroy that Capitol."

Terrell was referring to the speech made by Donald Trump on Wednesday against the backdrop of the White House. As a joint session of Congress met on the day to certify President-elect Joe Biden’s victory in the 2020 election, Trump addressed his supporters to reiterate that he would ‘never give up… never concede’ the results of a voting he claimed had been ‘rigged’.

Trump had earlier tweeted on 20 December that it was ‘statistically impossible to have lost the 2020 Election’, as he called on his supporters to congregate for a ‘big protest’ on 6 January.

As thousands congregated in Washington to express their support for Trump, the POTUS said:

“We’re going to walk down to the Capitol and we’re going to cheer on our brave senators and Congressmen and women.”

Slamming the ‘criminals’ who had instigated the ensuing violence in the Capitol, Terrell acknowledged that they should be prosecuted. However, he emphasised that the Democrats had “sat on their hands during the summer when rioters destroyed Democratic cities," in a reference to the Black Lives Matter (BLM) protests that swept the nation after the death of an African-American man, George Floyd, at the hands of the police.

"For Joe Biden to play the race card today and say that there would have been different treatment for Black protestors, those are criminals. Criminals should be treated one way," said Terrell.

As the attorney insisted that Trump could not be prosecuted for telling his supporters to go to the Capitol building, Rivera disagreed, saying:

"When you light the fuse on a stick of dynamite and it blows up, it is your responsibility."

Terrell countered that if a person said, ‘Go down to the Capitol building and express your disappointment,’ it could hardly be construed as a ‘criminal act’.

"You know that, Geraldo, and the nation knows that. What those people did (to) go inside the building, damage the property, that is criminal activity. Donald Trump never recommended, suggested or told those people to go in and break into the Capitol building," said the civil rights attorney.

Terrell concluded by denouncing attempts of the Democrats to put the responsibility of ‘hundreds of thousands of people on the shoulders of Donald Trump because he disagrees with the process’.

"That’s wrong and that’s not a criminal act," he said.

The chaos at the US Capitol on Wednesday left five people dead, with one woman shot, a police officer dying as a result of the violence, and three others succumbing to various "medical emergencies” in the wake of the standoff between the Trump supporters and police.

He was killed while defending our Capitol from a rampaging mob of Trump supporters.

He responded to the riots and was injured while physically engaging with protesters.

He was 42 years old. pic.twitter.com/OBSya2HXGt

​Hours later, the building was secured, with the National Guard summoned and lawmakers returning to the Capitol; Congress resumed its proceedings.

The session certified Joe Biden's victory in the presidential election, clearing the way for the Democrat to be sworn in on 20 January.

Late on Thursday President Trump issued a video address where he condemned the violent actions that unfolded at the US Capitol, while acknowledging that a “new administration would be inaugurated” on 20 January.

“Like all Americans I am outraged by the violence, lawlessness and mayhem… The demonstrators who infiltrated the Capitol have defiled the seat of American democracy. And to those who broke the law, you will pay," said Trump.