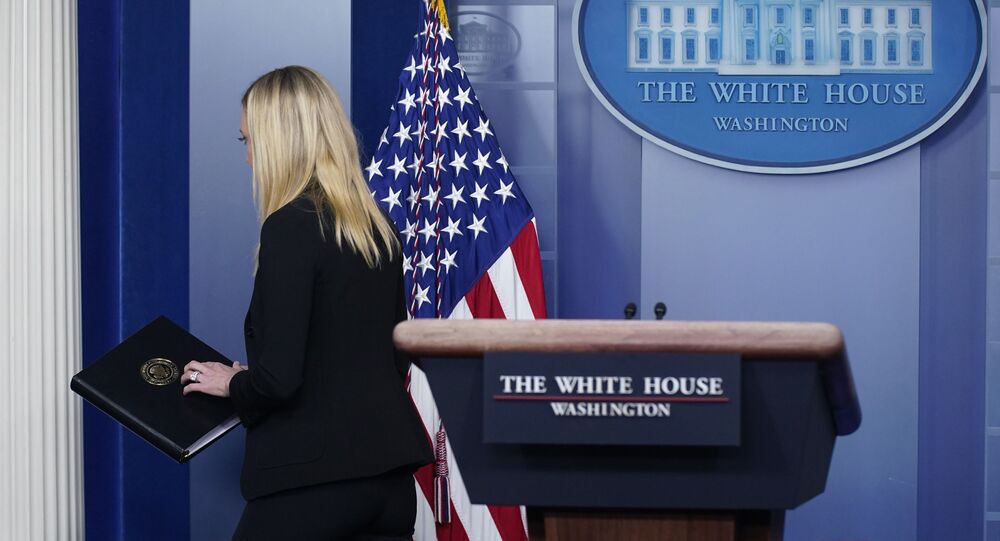 Hundreds of US President Donald Trump's supporters stormed the US Capitol on Wednesday as the commander-in-chief touted false claims that the 2020 election was stolen from him. At the time that security barriers were breached, congressional lawmakers were in the middle of certifying the results of the Electoral College.

A full day after riots broke out at the US Capitol, White House Press Secretary Kayleigh McEnany held a press briefing on Thursday and, on behalf of the Trump administration, condemned the shocking events that unfolded at the federal building.

"Let me be clear, the violence we saw yesterday at our nation's capital was appalling, reprehensible and antithetical to the American way. We condemn it," McEnany said. "It is unacceptable, and those that broke the law should be prosecuted to the fullest extent of the law."

"What we saw yesterday was a group of violent rioters undermining the legitimate First Amendment rights of the many thousands who came to peacefully have their voices heard in our nation's capital. Those who violently besieged our Capitol are the opposite of everything this administration stands for," she added.

​McEnany concluded the brief statement by stating that individuals within the White House were working to ensure "an orderly transition of power" to the incoming administration of US President-elect Joe Biden.

"It is time for America to unite, to come together, to reject the violence that we have seen," she said.

McEnany did not take any questions and did not make any mention of Trump regarding the social media posts that incited the violence. Although Trump called on rioters to vacate the Capitol grounds, he has not personally condemned the events that took place.

The statements from the White House came amid ongoing talks to remove Trump from office by invoking the 25th Amendment. Several lawmakers have voiced their support for the move, including House Speaker Nancy Pelosi (D-CA) and Senate Minority Leader Chuck Schumer (D-NY).

Nearly 70 individuals have been arrested for participating in the Wednesday riots.

Acting US Attorney for the District of Columbia Michael Sherwin announced Wednesday that the US Department of Justice was considering lodging criminal charges against any individual who was involved in the rioting. When asked whether investigators were considering Trump's role in sparking the riots, Sherwin stressed that officials were "looking at all actors."

Additionally, Sherwin indicated that an investigation into the Capitol siege would more than likely continue through the end of 2021, and that rioting and insurrection charges "are on the table."