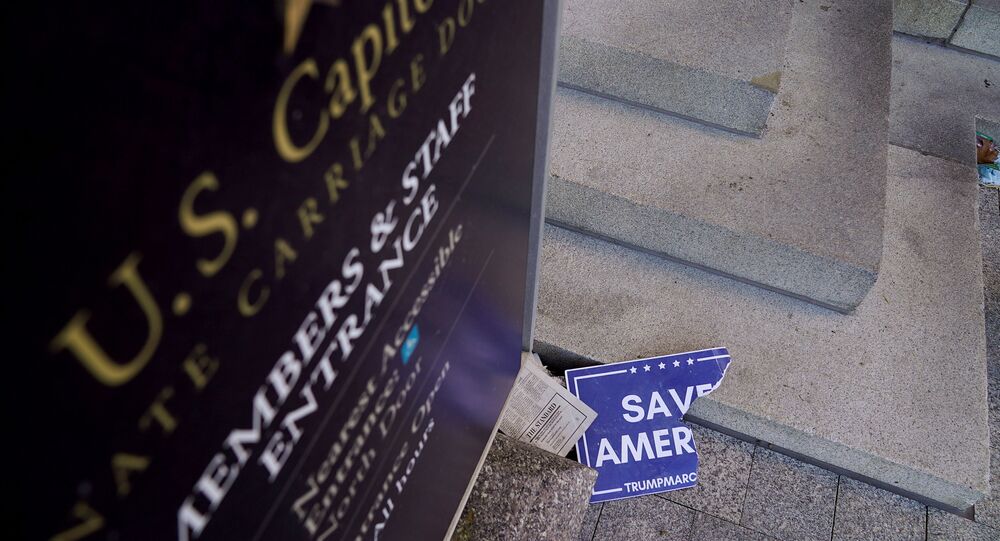 The US Capitol building was besieged by Trump supporters on Wednesday afternoon after the president called on citizens to continue to fight for what he called the legitimate results of the 2020 election.

A top federal prosecutor in Washington, DC has not ruled out potentially charging President Trump in connection with inciting violence at the US Capitol, CNBC News reported on Thursday.

Acting US Attorney Michael Sherwin told reporters on Thursday that the US Department of Justice was ready to initiate charges against anyone responsible for the riot at the US Capitol building, where at least four people died amid the chaos. One of the victims was identified as a female Air-Force veteran, shot inside the Congress hall by a police officer.

“I don’t want to sound like a broken record. We’re looking at all actors here,” Sherwin said in response to the question whether President Trump could face potential charges. “Anyone who had a role and where the evidence fits a crime.”

Protesters breached the Capitol as the congressional certification of Democrat Joe Biden's victory in the 2020 election was underway, forcing lawmakers to halt the meeting and leave the building immediately, with some of them having to hide in a shelter.

BREAKING: Protesters have made their way INSIDE the United States Capitol

The events have been followed by efforts to oust President Trump, including either through invoking the 25th Amendment, which would see removing Trump from power and installing Vice President Mike Pence instead, or by initiating an impeachment procedure against the US president. The idea of impeachment has been voiced by Senate Democratic Leader Chuck Schumer and House Speaker Nancy.

“If the vice president and the Cabinet refuse to stand up, Congress should reconvene to impeach the president”, Schummer said on Thursday.

Speaker Pelosi says that if Pence and the Cabinet doesn’t move on the 25th amendment she’s willing to move to impeach.

“my friends we are in a very difficult place as a country as long as Donald Trump remains in The White House.”

Later on Thursday, House of Representatives Judiciary Committee Chairman Jerrold Nadler took to Twitter to support an "immediate impeachment" of President Trump, adding that articles of impeachment should be brought directly to the House floor.

I am once again urging that President Trump be impeached and removed from office. We have a limited period of time in which to act. The nation cannot afford a drawn out process and I support bringing articles of impeachment directly to the House floor.https://t.co/xpuFwaLTC0

The idea of launching an impeachment, however, was not echoed by President-elect Joe Biden, who supports a peaceful transition of power. In the wake of US Capitol siege, acting Pentagon chief Christopher Miller said on Thursday that the Defense Department determined to perform its duties “in accordance with our oath of office”, and will execute “the time-honored peaceful transition of power” to Biden.

Amid the calls for an impeachemnt, The New York Times reported, citing unnamed sources, that Trump has suggested to aides the possibility of pardoning himself of any crimes, but it was unclear if he discussed this matter in light of the unrest on Capitol Hill on Wednesday.

Wednesday's events have prompted several Republicans to reconsider their previous intentions to support his challenge to the electoral vote certification, with US Senator Kelly Loeffler saying, “the events that have transpired today have forced me to reconsider and I cannot now in good conscious object to the certification of these electors.”

As a follow-up, several high-ranking officials announced they are either resigning or going to do so, including Mick Mulvaney, President Trump’s former chief of staff, who told CNBC that he stepped down as special US envoy to Northern Ireland.

US Transportation Secretary Elaine Chao, the wife of Senate Majority Leader Mitch McConnell, announced her resignation on Thursday, saying “our country experienced a traumatic and entirely avoidable event as supporters of the president stormed the Capitol building following a rally he addressed”.

In another blow to President Trump, tech giants suspended his social media accounts on Wednesday night, blocking the US president from his audience of nearly 150 million. As the violent events unfolded at the US Capitol complex, Trump tweeted to call on protesters to leave the building and respect law and order.

However, the two other similar tweets, in which Trump mentioned the "election fraud" he has been fighting against for two months, have been since deleted by Twitter, before it locked the president's account for 12 hours. As a follow-up, Facebook blocked Trump from using his official page for an indefinite period of time.