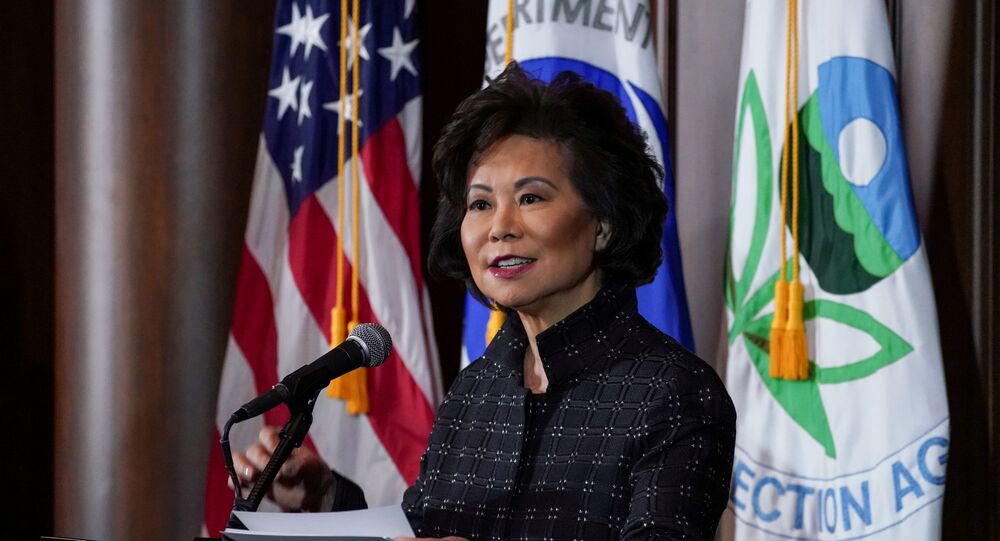 Deputy Assistant Secretary of Commerce for Intelligence and Security John Costello, White House Deputy Press Secretary Sarah Matthews, US Special Envoy to Northern Ireland Mick Mulvaney and other administration officials have announced, or are anticipated to reveal, their resignations over the election-related riots that took place Wednesday.

US Transportation Secretary Elaine Chao on Thursday became the first member of US President Donald Trump's Cabinet to resign in the wake of presidential election protests that triggered a congressional lockdown and curfews in Washington, DC, and surrounding jurisdictions.

"Yesterday, our country experienced a traumatic and entirely avoidable event as supporters of the president stormed the Capitol building following a rally he addressed," Chao asserted in a Thursday afternoon announcement.

It has been the honor of a lifetime to serve the U.S. Department of Transportation. pic.twitter.com/rFxPsBoh6t

"Today, I am announcing my resignation as US Secretary of Transportation, to take effect on Monday, January 11, 2020," the statement read. "We will help my announced successor Mayor Pete Buttigieg, with taking on the responsibility of running this wonderful department."

Chao, married to Senate Majority Leader Mitch McConnell (R-KY), was appointed as head of the US Department of Transportation on January 30, 2017. Her decades-long marriage to McConnell has remained a hot topic throughout her tenure, as well as when she served as secretary of labor under President George W. Bush from 2001 to 2009.

As recently as May, Chao and McConnell were taken to task by Democratic congressmen following Trump's firing of Mitch Behm, a 17-year veteran with the Transportation Department's Office of Inspector General who was overseeing a probe into alleged ethics violations

"Mr. Behm's removal is the latest in a series of politically motivated firings of Inspectors General by President Trump," Chao was told by House Oversight Chair Carolyn Maloney (D-NY), Transportation Chair Peter DeFazio (D-OR) and Rep. Gerald Connolly (D-VA). “This assault on the integrity and independence of Inspectors General appears to be an intentional campaign to undermine their ability to expose corruption and protect taxpayer dollars from waste, fraud, and abuse."

© REUTERS / Samuel Corum
Swearing-in for members of 117th Congress at the U.S. Capitol Building in Washington

"Any attempt by you or your office to interfere with the Office of Inspector General's investigation of yourself is illegal and will be thoroughly examined by our Committees," the Democratic lawmakers warned.

A flurry of Trump administration resignations has been announced and reported on following the January 6 protests, which came as a response to the congressional joint session's anticipated certification of Electoral College votes in favor of US President-elect Joe Biden.

Chao is the first Cabinet member to announce her post-riot resignation, however, other administration officials, including Mulvaney and Costello, have issued statements proclaiming they will also be quitting with just days left in Trump's presidency.

"The president has long disregarded and diminished the rule of law and the constitution. Yesterday, that culminated in violent sedition against the US Congress for the purposes of overturning a legally recognized and valid election," Costello wrote in his January 7 statement.

Today, I resigned my position as Deputy Assistant Secretary of Commerce for Intelligence and Security. pic.twitter.com/x8d6qCczok

Both legislative chambers were ordered into lockdown shortly after bipartisan representatives initiated a debate on Biden's narrow 10,457-ballot victory over Trump in Arizona, a state that has historically leaned more toward Republicans.

Speaking of his supporters on Wednesday, the outgoing US president argued that those protesting the Electoral College vote were "great patriots who have been badly and unfairly treated for so long."

At the same time, Trump's private Twitter account urged demonstrators "to remain peaceful," refrain from violence and remember the GOP is the self-proclaimed "Party of Law & Order."

It would not be until Thursday morning that Congress announced its finalized certification of Biden's 2020 election victory.