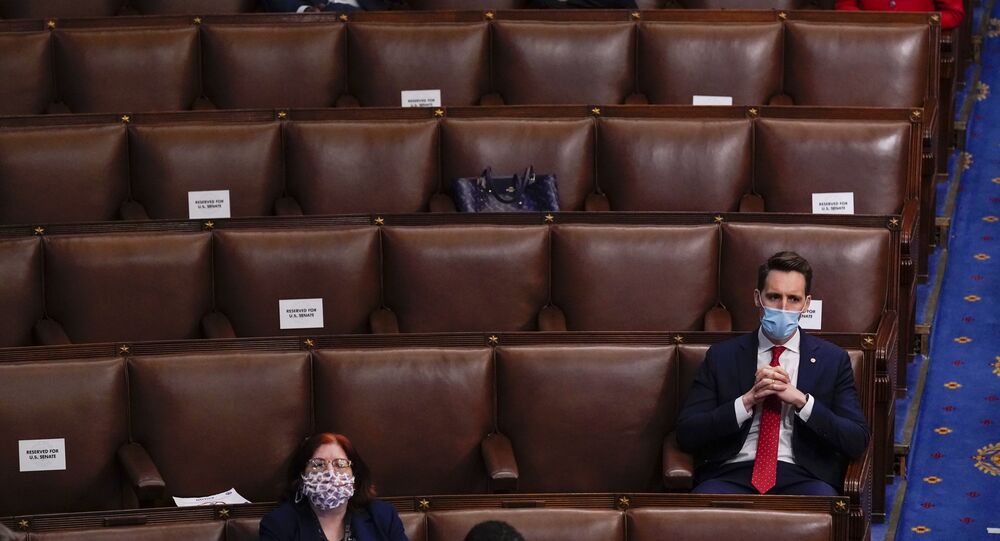 Republican Senator Josh Hawley of Missouri, who was the first senator in December to announce that he would object during Congress’s certification of the Electoral College vote to confirm President-elect Joe Biden's win, continued to object to the vote tally in Pennsylvania even as a violent pro-Trump mob breached the Capitol on Wednesday.

Republican Senator Josh Hawley of Missouri has come under fire from the Kansas City Star's editorial board for continued objection to the results of the presidential election even as a mob of President Trump's supporters stormed the Capitol building during the certification of President-elect Joe Biden’s win.

Josh Hawley’s actions in the last week had such impact that he deserves an impressive share of the blame for the blood that’s been shed.

“No one other than President Donald Trump himself is more responsible for Wednesday’s coup attempt at the US Capitol than one Joshua David Hawley, the 41-year-old junior senator from Missouri, who put out a fundraising appeal while the siege was underway,” wrote the editors, as cited by The Hill.

‘Free-for-All in the Temple of Democracy’

Denouncing Hawley, who last month became the first senator to announce that he would object during certification of the Electoral College vote by Congress to affirm Biden's victory, the editors slammed his obdurate stance on the issue.

“This, Sen Hawley, is what law-breaking and destruction look like. This is not a protest, but a riot. One woman who was apparently part of the pro-Trump mob was fatally shot by Capitol Police as lawmakers took cover. Some of those whose actions Trump encouraged and later condoned brought along their Confederate flags,” wrote the editorial board.

The Star’s editors added that the Senator's actions of late “had such impact that he deserves an impressive share of the blame for the blood that’s been shed".

A statement made by Hawley on Wednesday that hailed “the brave law enforcement officials who have put their lives on the line” was also criticized.

Thank you to the brave law enforcement officials who have put their lives on the line. The violence must end, those who attacked police and broke the law must be prosecuted, and Congress must get back to work and finish its job. pic.twitter.com/dJzR1lRMmS

“So modest, Senator, failing to note your key role in inspiring one of the most heartbreaking days in modern American history. We lost something precious on Wednesday, as condolence notes to our democracy from our friends around the world recognise,” they wrote.

“Now that they’ve seen exactly where those lies have landed us, decency demanded that they try to prevent further violence by making clear that President-elect Joe Biden did not win by cheating,” wrote the editors.

“No doubt plenty of Americans will see even this free-for-all in the temple of democracy as defensible. And those of you who have excused all of the brazen lawlessness of this administration can take a little bit of credit for these events, too. They couldn’t have done it without you,” added  the editorial comment.

On Wednesday, Hawley had persisted with his objections to Pennsylvania’s Electoral College results as the violent chain of events on Capitol Hill was unfolding.

While the rioting protesters, who echoed Donald Trump’s claims that the election had been "rigged", broke in to the building, leaving a trail of destruction in their wake, many fellow Republican senators backed down from challenging the election result.

Four people died in the standoff between the protesters and the police - a woman was fatally shot by Capitol Police and three others died  of “separate medical emergencies” near the Capitol grounds. The Missouri senator had said that although he did not support violence, the Senate should go forward with the legal process and not dismiss his concerns.

Shameful. Even after his actions directly resulted in a violent riot, Sen. Josh Hawley continues to lie about the election.

Pennsylvania had a free, fair, and secure election. That's a fact.

​Hawley included a call to debate his objections “peacefully, without violence, without attacks, without bullets." There has not yet been an official comment on the report from Hawley's office.

The Senate decided to skip any discussion on the objection before voting to strike the motion, and the House of Representatives engaged in two hours of debate.

After order was restored on Capitol Hill and the procedure resumed in Congress, legislators at their joint session finished counting the Electoral College votes and confirmed President-elect Joe Biden the winner early Thursday morning.