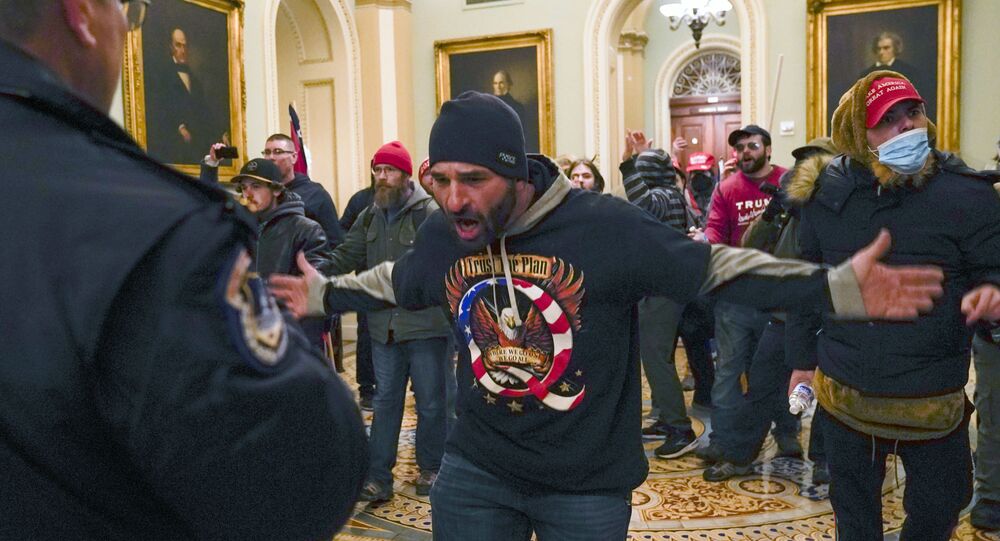 Supporters of US President Donald Trump shocked many within the US and abroad on Wednesday after thousands flocked to Washington, DC, to protest the Electoral College certification, with dozens opting to storm the US Capitol where recounting efforts were being undertaken.

Although efforts to challenge the certification were supported by over a dozen congressional Republican lawmakers, multiple party members have objected, arguing that objecting to the recount infringed on voters' right to elect their next president.

State Rep. Aaron Pilkington, a Republican who represents Arkansas’ 69th district, told Sputnik on Wednesday that he was “horrified” by the events unfolding in the nation’s capital. “This is not the American way,” he stressed.

“Those who stormed the Capitol should be arrested and prosecuted. America is better than this, and I hope that both Republicans and Democrats will come together denouncing these terrible events.”

The latest details from the US News and World Report indicated that at least 13 arrests have been made so far, and that “numerous guns” had been recovered from protesters who refused to adhere to local laws regarding firearms. The city prohibits anyone from carrying firearms on the Capitol grounds, among other areas.

Weighing in on the events, Ethan Ralph, a political commentator and founder of The Ralph Retort who is based in nearby Richmond, Virginia, remarked that the Capitol was “in complete disarray,” and that he does not anticipate “peace and unity coming around the corner anytime soon.”

It’s unclear how long protests may last, but reports suggest that Wednesday’s unrest served as just a taste of what may come in the days ahead of US President-elect Joe Biden’s anticipated inauguration in exactly two weeks.

Although DC Mayor Muriel Bowser imposed a 6 p.m. curfew, many protesters have continued to remain near the Capitol, even in light of National Guard forces being deployed. Footage from the scene show officers simply guiding protesters away from the grounds after one woman was fatally shot in the neck.

However, it’s worth noting that the current treatment of protesters by law enforcement officials in DC is a complete shift from how peaceful demonstrators were treated in June 2020, when officials fired rubber bullets and deployed tear gas to clear protesters away from the White House for Trump’s photo-op outside of the St. John’s Church.

Investigative journalist Mark Dankof has suggested that the events unfolding many on Americans’ TV screens show the looming demise of the Land of the Free.

“The United States is coming apart at the seams,” he said, adding that the country is in the middle of a constitutional crisis that may in the end see the US’ Republican Party “flounder.”

“The only thing that keeps this thing from collapsing is the continued status of the American dollar [as] the reserve currency of the world,” Dankof explained.

As the earlier electoral vote recounts were paused on account of the turmoil, congressional leaders have stated that effort to resume the election's certification will resume Wednesday night; however, concerns regarding the Capitol's security remain.