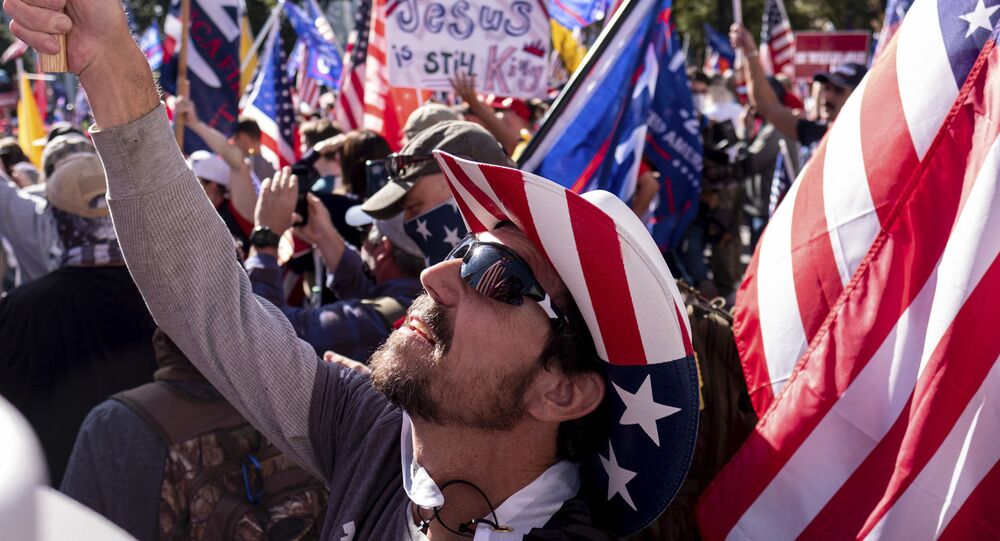 Although the battle for control over the US Senate is still not over, US observers are inclined to think that the Democrats are going to win both Georgia races, adding, however, that the 2022 midterms may tip the balance of power in the GOP's favour, again.

Democrat Raphael Warnock, a pastor of Ebenezer Baptist Church in Atlanta, has been called the winner of one of Georgia’s two Senate runoffs by the US media, while his fellow party member Jon Ossoff leads in the contest with Republican David Perdue.

Should Ossoff take the second Senate seat, the upper chamber will be evenly split between the two American parties. Given that Vice President-elect Kamala Harris is capable of breaking the tie in the Senate, the Democratic Party could end up maintaining control over both chambers of Congress.

"A Democratic Senate could provide an unexpected level of legislative freedom to the incoming Biden administration, making it easier for Democrats to move through their agenda without fear of viable GOP resistance in either congressional chamber", says Sean P. Cunningham, associate professor at the Department of History at Texas Tech University.

Under these circumstances, an evenly divided Senate could result in "more influence for centrists in both parties", he notes, admitting, however, that "compromise has been a challenge in Washington in recent years".

"The victory of Democrat Raphael Warnock and the apparent victory of Jon Ossoff, coming on the heels of President Trump’s loss of the presidency, constitutes a stunning rebuke of Trumpism", argues Joseph Watson, professor at the University of Georgia, citing the fact that Georgia has long been a red state.

Jon Ossoff claimed victory on Wednesday morning: "It is with humility that I thank the people of Georgia for electing me to serve you in the United States Senate", he said, addressing his supporters. However, his rival, David Perdue, has not conceded yet.

Although the Democratic Party retained their majority in the House as a result of the November elections, it nevertheless lost a net of 13 seats in the chamber. For comparison's sake, the Dems managed to flip 39 seats in the 2018 midterms. While they are apparently projected to take control over the Senate, this balance of power could be easily upset during the 2020 midterms, according to Cunningham.

"I suspect, that Republicans will persist as an anti-Biden party through the 2022 midterms, at which time they could retake the Senate and possibly the House in anticipation of the 2024 presidential race", the professor suggests. "If American political history teaches anything, it’s that circumstances usually change sooner than expected."

Watson also expects "the Republican minority" to "work as the last barrier standing to attempt to challenge aspects of President-Elect Biden’s agenda", though they will not have much leverage if they lose the Senate.

"Republicans have to come to terms with the reality of their losses and chart a path in the future that appeals to suburban and other voters outside the Trump base to have a good shot at winning back congressional seats in the 2022 midterms", he suggests.

There is yet another scenario under which Donald Trump and his allies form a new populist party, Cunningham believes.

"Republicans are in a difficult spot", the academic says. "Trump is still the party’s most popular individual, though he’s also the most divisive. Depending on how things shake out with the Electoral College vote count on Wednesday, he and his allies have threatened to break away from the GOP to form a new, exclusively 'populist' party. Third party movements are very difficult to sustain, but they’re by no means unprecedented."

On 6 January, the US Congress is due to certify the election results, something which is opposed by Donald Trump and his allies, who cite suspicions of massive fraud during the 2020 presidential election. Meanwhile, the president's supporters have gathered in Washington DC for a protest march in anticipation of the Congress' decision.

According to conservative online newspaper The Epoch Times, 89 Representatives and 13 Senators have pledged to object to the Electoral Votes. An objection could trigger a two-hour debate, followed by a vote. Nullifying the contested electoral votes, requires the approval of both chambers, which appears unlikely given that the Dems, who control the House, have strongly rejected the allegations of electoral fraud.

The new Senate's 6 January session will have a 50-48 ratio in favour of the Republicans, as neither of the two Georgia Senate runoffs has been certified yet.