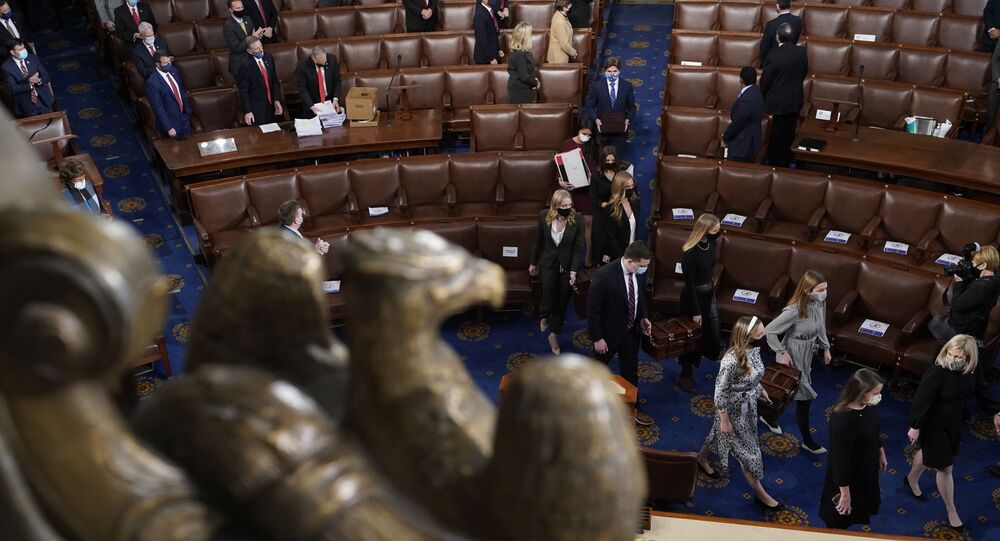 Ahead of the certification of the US Electoral College results, over a dozen congressional lawmakers announced their intention to challenge the recount in an effort to side with US President Donald Trump and his unsubstantiated claims of voter fraud.

The first challenge to the Electoral College certification came on Wednesday from Rep. Paul Gosar (R-AZ) and Sen. Ted Cruz (R-TX), a move which subsequently triggered debates on the electoral votes in each of the congressional chambers.

The certification came moments after Sen. Amy Klobuchar (D-MN), an early candidate for the Democratic nomination in the 2020 presidential election, read aloud the Electoral College vote count for the state of Arizona.

Video of the objection shows multiple lawmakers standing and applauding the challenge.

​Both the US House of Representatives and the Senate are expected to debate the Arizona challenge for up to two hours.

Majorities in both chambers would be needed in order to uphold the objection; however, the bid is likely to fail, as the House is controlled by Democrats and the majority of Republicans in the Senate are expected side with Democrats.

US President-elect Joe Biden toppled Trump's chances of scooping up Arizona's 11 electoral votes by one of the narrowest margins in the country - 10,457 votes. Biden's win marked him as the first Democratic presidential nominee to take the Copper State since former US President Bill Clinton in 1996.

Eight lawsuits challenging the Arizona results were filed and alleged a variety of voter fraud claims, but all attempts were dismissed on account of a lack of evidence. Most recently, the Arizona Supreme Court upheld a lower court ruling to throw out a suit after it was determined plaintiff did not have the right to contest the election, since she was not a registered voter when the suit was initially filed.

The Arizona challenge is expected to be the first of at least three such objections to state certifications during the joint congressional session.

Moments after the challenge, Senate Majority Leader Mitch McConnell (R-KY) issued a scathing attack against his fellow Republicans, stressing that overturning the election results would push American democracy into a "death spiral."

“I’ve served 36 years in the Senate - this will be the most important vote I’ve ever cast,” McConnell told lawmakers, noting that he did support Trump's move to contest the election through the court system.

“Voters, the courts, and the states have all spoken - they’ve all spoken,” McConnell said. “If we overrule them, it would damage our republic forever.” He added that if election results were overturned based on unsubstantiated fraud claims, "our democracy would enter a death spiral."

This is not McConnell's first time urging Republicans against efforts to challenge the results. After acknowledging that Biden bested Trump, he subsequently called on his colleagues to not join the overturning efforts, as doing so would likely damage the chances of politicians running for election in 2022.

McConnell also stressed that "it would be unfair and wrong to disenfranchise American voters and overrule the courts and the states on this thin basis."

Despite McConnell's pleas, over a dozen lawmakers have vowed to challenge the results.