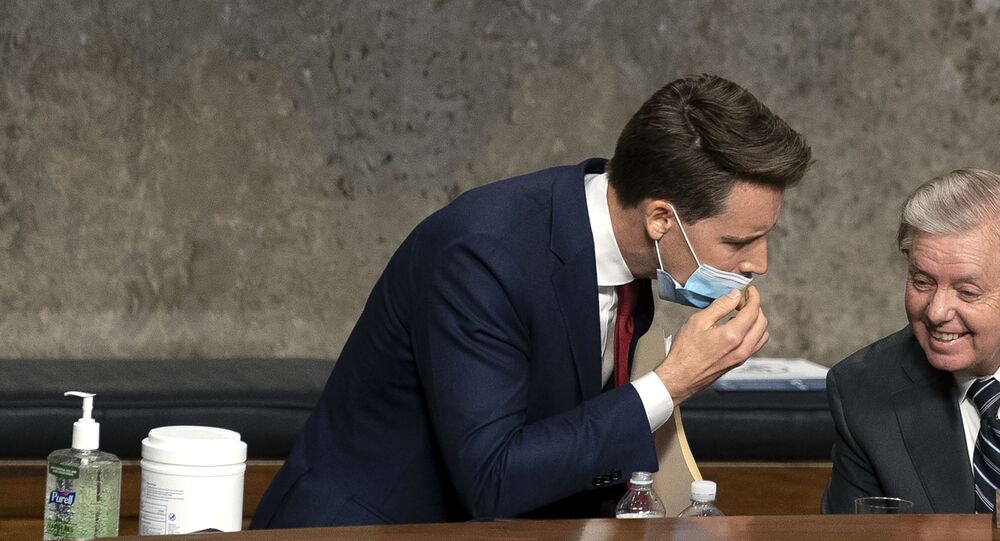 Josh Hawley was the first Republican senator to assert he would object when Congress meets on Wednesday to certify President-elect Joe Biden’s Electoral College victory, calling for a commission to look into allegations of election fraud.

Missouri Sen. Josh Hawley has taken to Twitter to fume that “Antifa scumbags threatened” his wife and baby daughter while demonstrating outside his family’s house in Washington, DC.

A video shared on social networks showed a number of activists participating in what was referred to as a “candlelight vigil” outside the senator’s estate, while largely remaining on the street.

At one point, a few protesters are seen carrying a placard to the front door of the residence and ringing the doorbell, while another activist makes a speech through a megaphone. A woman can then be seen looking out of the window, but not going up to the door.

In the video, activists are heard loudly chanting slogans like "due diligence has been done, Biden-Harris has won", referring to President-elect Joe Biden and his running mate Kamala Harris, whose victory the Missouri senator intends to challenge at a joint session of Congress this week.

Hawley, 41, subsequently tweeted that the group’s vigil consisted of “screaming threats through bullhorns, vandalizing property, pounding on the doors of homes and terrorizing innocent people and children”, dubbing the scene outside his family’s home in Fairfax County “leftwing violence”.

Tonight while I was in Missouri, Antifa scumbags came to our place in DC and threatened my wife and newborn daughter, who can’t travel. They screamed threats, vandalized, and tried to pound open our door. Let me be clear: My family & I will not be intimidated by leftwing violence

Meanwhile, the activists themselves told The Washington Post that they had staged a peaceful vigil to protest a GOP plan to object to Congress’ certification of the 3 November vote results. They claimed they hadn’t engaged in vandalism or even knocked on Hawley’s door.

Last week, Hawley became the first senator to publicly announce that he would voice his objections when Congress assembles on Wednesday to debate the Electoral College vote, and would thus trigger a heated floor debate.

More than 10 others have since vowed to join him in his motion to challenge votes from some battleground states, as President Trump has repeatedly blasted the latest presidential election as "the most corrupt" in US history due to numerous instances of alleged voter fraud.

The incumbent president’s team has in recent time been challenging the results in courts of law across the country, although their suits have largely been turned down due to a “lack of evidence”. President Trump insists that the only thing he personally is striving for is a fair count of all legal ballots.

Despite his scepticism of his Democratic rival’s win, he instructed Oval Office officials to get ready for a transfer of power on Inauguration Day on 20 January.