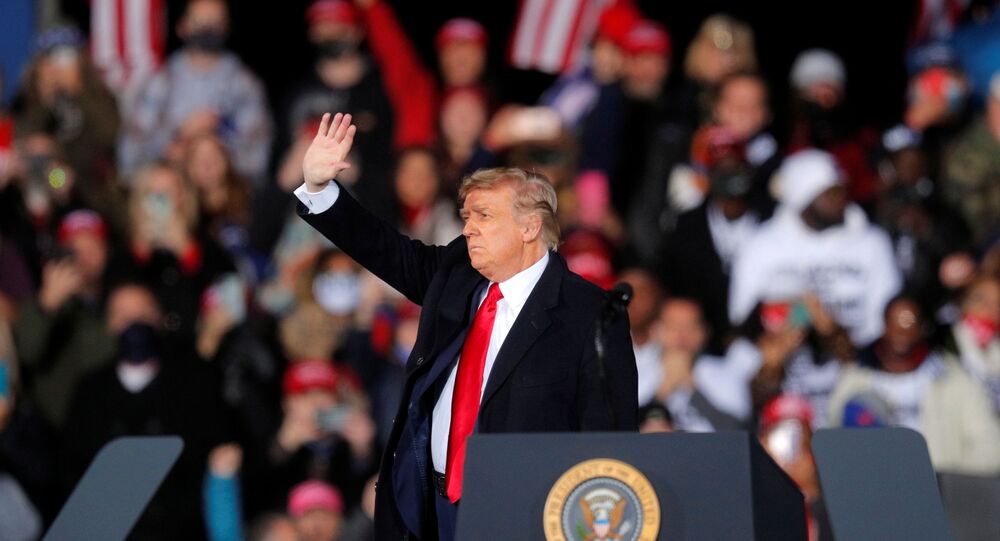 A handful of Democrat Congress representatives are calling for President Trump to be prosecuted or impeached over a leaked phone recording, but law professors interviewed have said either that Trump would not — or should not — be tried.

Legal experts are divided on whether the latest Democrat demands for US President Donald Trump to be prosecuted have merit — or are politically wise.

In a recording of Saturday's phone call, leaked to The Washington Post, Trump urges Raffensperger — Georgia's chief election official — to investigate claims of ballot-rigging in the 3 November presidential election.

“I just want to find 11,780 votes, which is one more than we have. Because we won the state”, Trump was heard saying.

Fellow New York Congresswoman Alexandria Ocasio-Cortez called on Monday for a second attempt to impeach Trump in the 16 days before Biden is due to take office.

Political news site The Hill quoted two law professors on Tuesday, while both were open about their opposition to Trump.

Ohio State University Law Professor Edward Foley was reticent to cross the Rubicon of prosecuting a sitting or recently-in-office president.

“While President Trump may have engaged in criminal conduct in this phone call, I think the best interests of the nation would be to avoid traditional criminal prosecution, with the contemplation of imprisonment or something like that”, Foley stressed.

Foley was also quoted in the original Washington Post article on the leaked recording, which summed up his opinion that "the legal questions are murky, and it could be difficult to prove that Trump knew he was encouraging illegal behaviour". The professor told the Post that Trump's actions were “inappropriate and contemptible” and should prompt moral outrage.

Election law expert Professor Rick Hasen of the University of California, Irvine said Trump deserved to be tried over his “shakedown” on Raffensperger and Germany — but conceded that was unlikely to happen.

“Despite the long odds, I would hope at least Georgia prosecutors will consider going after Trump, or that the House of Representatives might impeach him again with the goal of disqualifying him from running in 2024”, Hasen said.

“Lack of prosecution or investigation demonstrates that there’s little to deter the next would-be authoritarian—perhaps a more competent one—from trying to steal an election”, he added. “Trump came a lot closer than he should have this time, and next time we may not be so lucky”.

Foley agreed that Trump should be disqualified from seeking office again, but by the Republican Party.

“The consequence of his misbehaviour should be to disqualify him from leadership within his own political party, because no political party should want a leader with such flagrant disregard for the will of the voters — and disrespect for the electoral process, which exists for the benefit of the voters to make their choice”, Foley said.

© REUTERS / Danny Wild
What's Behind Trump Tape Scandal & Why Did Big Tech Treat It Differently Than Hunter Biden Exposé?
“This disqualification should come from the party itself”, he added. “The Republican Party needs to figure out how to repudiate Trump’s denial of electoral reality”.

Trump has previously been affiliated with the Democratic Party and sought the nomination of Ross Perot's now-defunct Reform Party in the 2000 presidential election. Before entering the Republican primary race in 2015, Trump claimed his personal wealth was at $8.7 billion — indicating he could fund an independent election campaign.