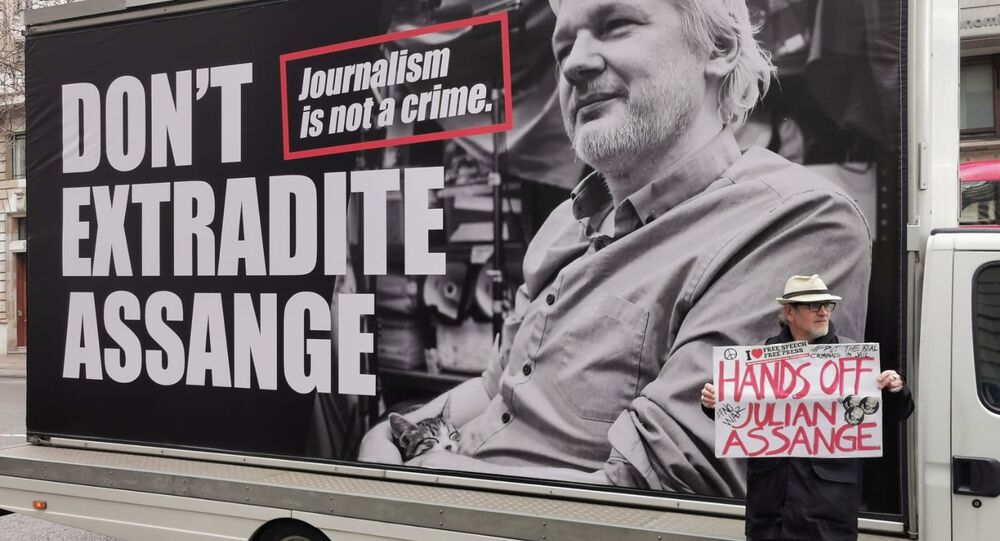 A British court's decision not to extradite WikiLeaks founder Julian Assange is a victory for him but the reasons voiced by the judge are a mixed bag since she accepts much of the US case narrative, say international observers and human rights activists who urge the UK authorities to let Assange go as he has suffered enough.

On 4 January, UK District Judge Vanessa Baraitser ruled that WikiLeaks founder Julian Assange will not be extradited to the US, where he is indicted by the US on 18 federal charges carrying a maximum sentence of 175 years in jail over alleged espionage and hacking which resulted in the publication of classified Afghan and Iraq war logs and State Department cables by WikiLeaks. The judge said the defendant, who suffers from clinical depression, could commit suicide in a US prison. The American government has signalled that it will appeal the British court's decision.

Victory for Assange but Not a Win for Journalism

Assange would hardly receive a fair trial if extradited to the US, Taylor Hudak, editor of acTIVism Munich and co-founder of Action4Assange believes, in contrast to the assessment made by Judge Vanessa Baraitser. Neither does he agree with the judge's statement that the case is not politically motivated.

"The judge accepted much of the flawed and punitive US case against Assange", says Peter Tatchell, a British human rights campaigner. "He published the truth about US war crimes and human rights abuses, which should never be a crime. Assange should be set free immediately".

The WikiLeaks founder's legal team insists the 49-year old Australian should be entitled to First Amendment protections of freedom of speech since he acted as a journalist. For their part, US prosecutors underscore that Assange conspired with then-US Army intelligence analyst Bradley (Chelsea) Manning to commit computer intrusion into the Pentagon network to steal the diplomatic cables and military files.

The rejection by the UK court of the US Govt's request to extradite Julian Assange to stand trial on espionage charges is obviously great news. But the judge endorsed most of the USG's theories, but ultimately found the US prison system too inhumane to permit extradition.

​The British judge dismissed Assange's defence team's argument that he was protected by free-speech guarantees, stressing that his "conduct, if proved, would therefore amount to offences in this jurisdiction that would not be protected by his right to freedom of speech".

At the same time, Judge Baraitser said that the defendant suffered from clinical depression which could be exacerbated by his extradition to the US and prompt him to take his own life. She opined that Assange has the "intellect and determination" to get around any suicide prevention measures by the US authorities.

© Sputnik / Justin Griffiths-Williams
Supporters Julian Assange outside the Central Criminal Court (Old Bailey) in London, where WikiLeaks founder Julian Assange is trialled and is facing a possible extradited to the United States

It is unlikely that the US will give up trying to get its hands on the WikiLeaks founder any time soon, according to Tatchell.

"When the US makes its appeal, it may offer to detain Assange in a less harsh prison, in a bid to allay the court's concern about Assange's risk of suicide", he suggests. "I hope the court will reject that ploy. Incarceration in any US prison would jeopardise Assange's mental health and make him a suicide risk".

The human rights campaigner fears "the UK government will do whatever the US demands, as it has always done". On the other hand, if the US appeal is rejected, there is no legal basis for the UK to further charge or detain Assange, according to him.

Washington's effort to extradite Assange may spoil the image of the Biden administration, according to John Pilger, a veteran investigative journalist and filmmaker from Australia.

"If the US goes ahead with an appeal, President Biden's Department of Justice will find itself with a Trump legacy it may not welcome", Pilger says. "The judge has ruled on the threat the US penal system poses to a man who has been through Julian's ordeal, described by Nils Melzer, the UN Rapporteur, as torture: as 'a decade of persecution and unjust suffering'. An appeal would focus on the dark, almost medievalist side to the US in which prisoners are lost forever in hellholes, such as the one Julian would end up in, in Colorado. They call this 'special administrative measures'; it is the euphemism of everything [UN Special Rapporteur on Torture] Nils Melzer has described, and more. Would Biden want that aired in Britain's High Court, perhaps its Supreme Court, and the media campaign it would attract?"

Assange's supporters need to exert pressure on the US not to appeal the British judge's decision, according to Hudak: "This fight does continue until Assange is free", he says. "We must continue to cover the case and defend Assange. The court has been adjourned until this Wednesday morning 6 January where a bail hearing will take place at Westminster Magistrates' Court. I hope the judge will grant him bail".

WikiLeaks' Kristinn Hrafnsson: 'It is a win for Julian Assange - but it is not a win for journalism. The US government should drop their appeal and let Julian go free. #AssangeCase pic.twitter.com/1b1J2qQQAf

​Tatchell does not share the activists' optimism suggesting that "in all probability, the court will deny Assange bail while he awaits the outcome of the US appeal". Still that won't be fair as the WikiLeaks founder has already spent many months in prison and "any further detention is unjustified", according to him.

Julian Assange is precisely the kind of victim that the Geneva Refugee Convention was intended to protect - a journalist who reveals government criminality, stresses retired UN Independent Expert on the Promotion of a Democratic and Equitable International Order Alfred-Maurice de Zayas.

"The UN Working Group on Arbitrary Detention has already held Assange's detention to be contrary to international law and a violation of Article 9 of the Covenant on Civil and Political Rights", de Zayas points out. "UN Special Rapporteur on Torture [Nils Melzer] has correctly called the kind of treatment Assange has endured a form of torture. This must have consequences. The UK courts must respect these pronouncements and the jurisprudence of the European Court of Human Rights. I expect the UK courts to release Assange – the sooner the better – a decision to extradite him would of course be appealed to the European Court of Human Rights, which would 100% decide in favour of Assange".

While the legal battle is still pending, President Donald Trump can end the WikiLeaks founder's nightmare once and for all "by granting him a pardon", Hudak believes.

"I hope that the president, who has spoken out repeatedly against the deep state, will honour Assange who has exposed the deep state", the activist says. "This also includes Edward Snowden. He, too, deserves a pardon".