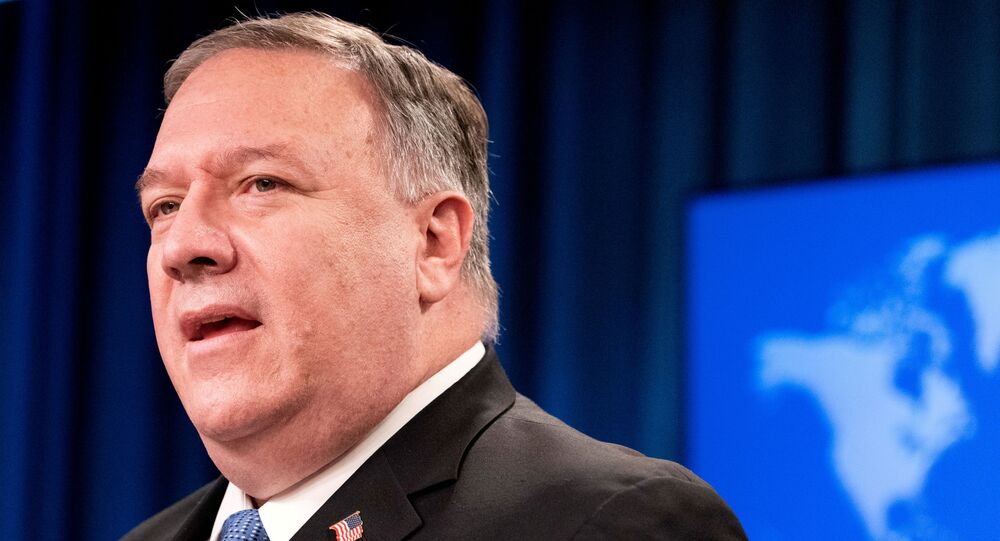 Throughout his first term, Trump has fought off accusations of purportedly pursuing a foreign policy favourable to Russia and allegedly colluding with Moscow, even after these claims were found to be unsubstantiated. POTUS, in turn, has insisted that he has been tougher on the Kremlin than his Democratic predecessor was.

US Secretary of State Mike Pompeo has taken to Twitter to stress the Trump administration's successes in being "tough on Russia" in an apparent attempt to dispel the longstanding notion that the current government has been too "soft" on the Kremlin.

Russia, Russia, Russia. . . let's talk Russia, cut through the noise. No Administration has been as tough on Russia as we have. Period. Full stop. Look at the facts. #LeadingFromTheFront pic.twitter.com/bUIyHt2IWm

In a series of tweets, Pompeo boasted that POTUS' administration has imposed sanctions on over 365 Russian citizens and entities in response to the country's alleged "destabilizing and aggressive actions" in Europe. He also recalled adding the Russian Imperial Movement to the list of terrorist organisations as a success of the administration, although the group's publications and website have already long been marked as extremist in Russia itself and it is not clear what Washington achieved with the move.

My counterterrorism team designated the Russian Imperial Movement and three of its leaders as Specially Designated Global Terrorists. 1st time the U.S. has ever designated foreign white supremacists as terrorists. https://t.co/qFFcRpt0Oh

At the same time, the secretary of state blasted the approach of the Obama administration, which, he argued, had coddled Moscow by gifting it "reset" buttons.

Pompeo apparently referred to the 2009 US policy that was symbolically set in motion by then-Secretary of State Hillary Clinton, gifting a button to Russian Foreign Minister Sergei Lavrov to mark a reboot of bilateral ties. The policy led to the signing of a crucial nuclear arms reduction treaty between the two states, but was ultimately undone after Western countries meddled in Ukraine's domestic politics and accused Moscow of being responsible for the civil war that erupted in the country's east in 2014.

Hurting Russian Energy Sector and Surpassing It in Military Strength?

Pompeo went on to boast about how under the Trump administration, the US heavily invested in its armed forces to take on its "adversaries", arguing that Moscow lacks the firepower that US forces, which are spread around the globe, possess. However, he avoided mentioning the fact that the US renewed its programmes for developing hypersonic weapons in the second half of Trump's term, after Russia and China had showcased their first advanced weapons in this class.

.@realDonaldTrump rebuilt and invested in our armed forces by providing the resources to take on all of our adversaries. Putin knows that his military can’t compete with American firepower. Smaller defense budgets? Now that’s collusion with Russia. pic.twitter.com/gWJqg1w82M

Instead, the secretary of state stressed how, unlike the Obama administration, Trump's Cabinet had agreed to supply lethal military assistance to Ukraine in order to help Kiev in its fight against the unrecognised Donetsk and Lugansk People’s Republic’s in the east. The Ukrainian government eagerly accepted Washington's aid, as it has continually failed to fulfil its part of the Minsk agreements, which are intended to reach a peaceful solution to the conflict.

President @realDonaldTrump unleashed America’s oil and gas industry, through exports and fracking, undercutting Putin’s ability to wield energy as a weapon. . . And benefiting U.S. energy producers, like the ones in Kansas! #RealEnergyIndependence pic.twitter.com/ApEgS8kQti

The top diplomat also claimed that the Trump administration had managed to undermine Russia's ability to "wield energy as a weapon" by boosting fracking efforts in the US and increasing the country's exports of oil and gas. Pompeo argued that there was "nothing like good ol' American fracking" in terms of putting additional "pressure on Putin", apparently referring to the alleged impact that the new oil and gas extraction method had on global energy prices.

The oil prices suddenly plunged in 2020, partially due to the lapse of the OPEC+ agreement on output cuts, but mostly because of a drastic drop in economic activities and tourism caused by the coronavirus pandemic. Even so, crude had by the end of 2020 managed to bounce back to levels not seen since the beginning of the pandemic. At the same time, the Trump administration's rampant use of sanctions as a pressure tool against Venezuela and Iran removed hundreds of thousands of barrels of oil daily from the global market, as these two states could no longer sell their crude to buyers.