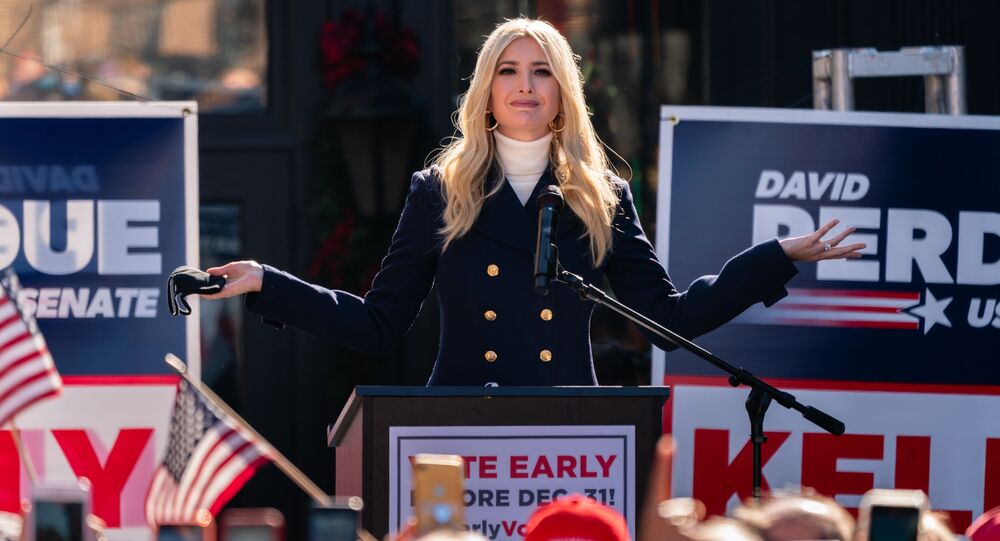 'America is Counting on You': Ivanka Trump Urges Georgia Voters to Back Republicans in Runoff Drama

In the 5 January runoff elections in Georgia, Republican Senators David Perdue and Kelly Loeffler will lock horns with Democrats Jon Ossoff and Reverend Raphael Warnock, respectively. The results of these crucial races will define the composition of the US Senate for the next few years.

President Donald Trump's daughter Ivanka has once again made public her support for incumbent Republican Senators Kelly Loeffler and David Perdue ahead of the Tuesday runoff elections in the US state of Georgia.

"Georgia, America is counting on you!", Ivanka Trump tweeted on Sunday, urging the state's residents "to defend the majority" and vote for Loeffler and Perdue.

Georgia, America is counting on You!

Defend the Majority and vote Loeffler and Perdue! 🇺🇸 pic.twitter.com/Vfam0mXFCh

The tweet came less than two weeks after the president's daughter went to Georgia to call on local voters to "fight for Trump" with their Senate picks.

"Georgia will decide whether our children will grow up under an oppressive government or whether America will remain the land of the free. I think we know what Georgia's going to decide", Ivanka said during a rally at the time.

She praised Loeffler and Perdue as persons who are "working incredibly hard to make sure this election is safe and secure and that every single legal vote is counted". The country's first daughter also urged Georgia residents to cast their ballots for the two as early as possible.

Her latest sign of support for Loeffler and Perdue comes as a record three million Georgia residents have voted early in the runoff elections, according to the latest turnout figures released by the University of Florida's US Elections Project on Friday.

Neck and Neck Race in Georgia?

Early voting wrapped up on Thursday, a few days after Fox News reported that election officials in Georgia are "gearing up" for a neck and neck race that will be followed by weeks of litigation.

Both Republicans and Democrats reportedly expect "razor-thin" results in the battleground state, which has been at the centre of the Trump campaign's fraud claims since the 3 November US presidential election.

POTUS recently claimed in a tweet that tens of thousands of "illegal" votes were registered in Georgia, regretting that no case filed over voter fraud allegations has been reviewed.

Trump continues to reject the results of the 3 November election, despite the US Electoral College vote earlier in December, when Democrat Joe Biden passed the threshold of 270 electoral votes required for him to become president, edging out Trump in a 306-232 vote.

© AFP 2020 / KAREN BLEIER
US Battleground States Urge Supreme Court to Reject Bid by Trump, Allies to Undo Biden Win
The Georgia runoffs will be decisive in terms of who controls the upper chamber of Congress for the years to come. Currently, Republicans, led by Majority Leader Mitch McConnell, have a 50-48 edge in the Senate.

In the event that both Democrats Jon Ossoff and Reverend Raphael Warnock prevail over Republican rivals David Perdue and Kelly Loeffler in Georgia on 5 January, Democrats and Republicans will have 50-50 Senate representation.

The second round comes after none of the Senate candidates secured a majority of the vote in their relevant races in the 3 November presidential election. At the time, Ossoff barely bested Perdue 48.5% to 47.5% and Warnock narrowly led Loeffler 48.5% to 46.9%.