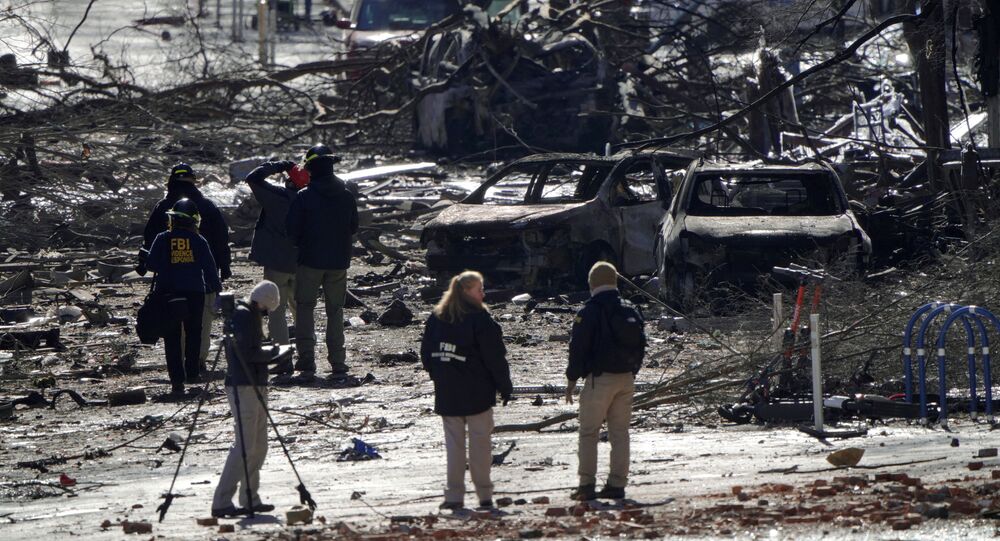 On Christmas morning a bomb-laden RV exploded in downtown Nashville, injuring at least eight individuals and destroying about 40 surrounding buildings. The US Federal Bureau of Investigation is still looking for clues as to what prompted 63-year-old freelance IT consultant Anthony Warner, who died on the spot, to stage the bombing.

The US Federal Bureau of Investigation is aware that Anthony Warner, the main suspect in the Christmas Day van bombing in Nashville, Tennessee, had "sent materials which espoused his viewpoints to several acquaintances throughout the country", FBI Special Agent Jason Pack said in a statement to The Hill on Saturday.

Pack did not reveal any specific information about the materials sent by the 63-year-old freelance IT consultant, who died in the explosion in the centre of Nashville.

"We're asking those who received these to contact the FBI at 800-CALL-FBI", Pack said, as quoted by the outlet.

The explosion took place in downtown Nashville in the early morning hours of 25 December. It was carried out via a bomb-laden recreational vehicle. Before the explosion, the RV broadcast an audio warning through loudspeakers, urging people in the area to evacuate.

Posted to Facebook by Chad Hardy, this is the first video I’ve seen of the actual RV exploding Christmas morning! #NashvilleBombing @NC5 pic.twitter.com/l4a2AZzUBC

Two days following the incident, police determined that the RV belonged to Warner. The DNA analysis of human remains, found at the crime scene, confirmed that the suspect had died on the spot.

Investigators are still seeking a motive for the bombing attack.

The Metropolitan Nashville Police Department said law enforcement were informed by the suspect's girlfriend in August 2019 that he was making a bomb. After the girlfriend's warning, police officers reportedly visited his home in Antioch but when they arrived no one opened the door. A spokesperson for the department said officers were prompted to leave the scene because "they saw no evidence of a crime and had no authority to enter his home or fenced property".

'Oddball' and 'Computer Geek': What is Known So Far About Nashville Bomber