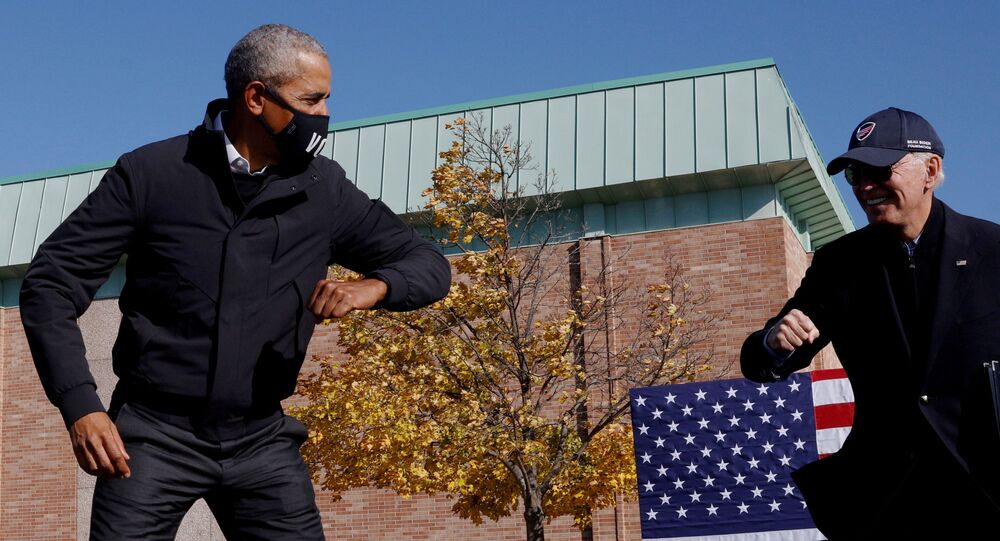 US President-elect Joe Biden served as former President Barack Obama's vice president from 2009 to 2017. Biden's Cabinet picks include many Obama-era appointees - a decision for which the president-elect has seen some criticism.

A ex-professor of constitutional law at Pepperdine University and a former Reagan and Bush administration official, Douglas Kmiec, in an op-ed for The Hill, has called on Joe Biden to appoint former US President Barack Obama as US Attorney General.

According to Kmiec, instead of "continuing to borrow Barack Obama’s trade line", Biden "needs Obama himself".

"The fastest way to re-establish the rule of law is for Biden to nominate Obama as attorney general [...] Appointing Obama certainly would be unprecedented, but so is the need. We have never had a former president take on the leadership of an executive department for a successor president, but nothing precludes it, save, possibly, Michelle Obama", the former professor suggested in his op-ed. "We must leave those domestic relations to the former president — but he has the intelligence, youth and character to do the job. Besides, it’s perfect preparation for subsequent additional public service on the Supreme Court."

Kmiec noted that keeping Christopher Wray as the head of the FBI and making the Justice’s current inspector general, Michael Horowitz, the head of its Office of Legal Counsel would "remove much division, doubt and uncertainty".

While Biden's actual plans for the Justice Department are yet to be unveiled, his known Cabinet picks are praised for their diversity, but also criticised by allegations of corruption and partisan politics.

“There’s not an obvious choice in my mind,” Biden told reporters when asked on his possible candidates for the post.

US President Barack Obama, who served two terms as the US president from 2009 to 2017, is an alumnus of the Harvard Law School. After graduating, he became a civil rights attorney and an academic, teaching constitutional law at the University of Chicago Law School from 1992 to 2004.