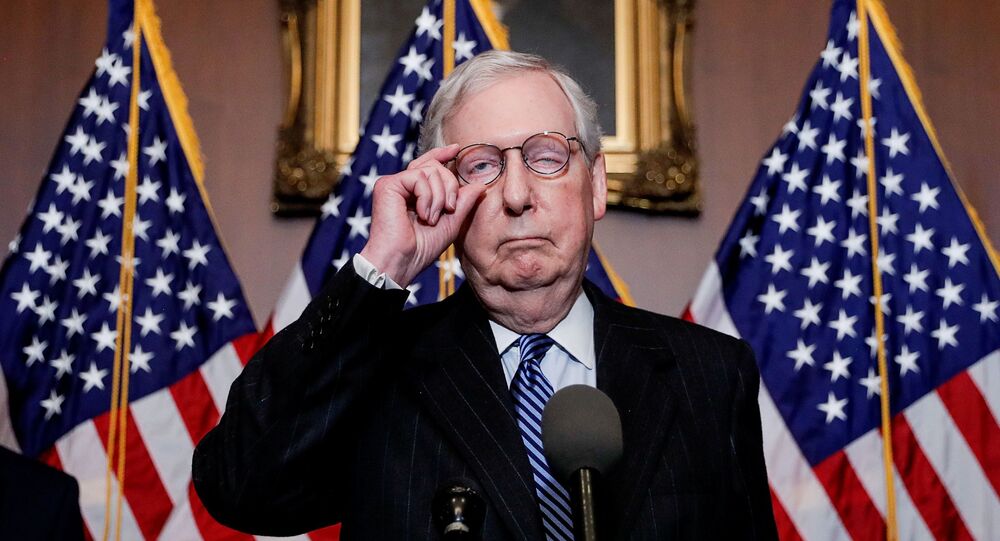 The Democratic leader of the US House of Representatives was also subjected to an act of vandalism on New Year’s Eve after unidentified perpetrators spray-painted demands for a larger COVID-19 relief stimulus on her house and left an object resembling a pig's head on her doorstep.

Senate Majority Leader Mitch McConnell apparently experienced a "Big Lebowski" moment on 2 January as he found "Where's my money" spray-painted all over the door of his house in Louisville, Kentucky, with the facade of the building also being vandalised with the words "f**k Mitch" and "Mitch kills the poor".

JUST IN - Louisville home of @senatemajldr Mitch McConnell vandalized with 'WERES MY MONEY', just one day after Speaker Pelosi's home was vandalized with a pig's head, fake blood, and graffiti, according to @WDRBNews. pic.twitter.com/UffIzyMlDX

The incident was first reported by WDRB-TV, but photos of the GOP senator's vandalised house later surfaced online. McConnell called the police to report the crime, while calling it a "radical tantrum" in his comment to the local Louisville Courier Journal. He called on those who disagreed with his policies to use more civilised methods to settle such disagreements.

"I’ve spent my career fighting for the First Amendment and defending peaceful protest […] This is different. Vandalism and the politics of fear have no place in our society. My wife and I have never been intimidated by this toxic playbook", McConnell said in a statement.

The Senate majority leader earlier turned down an attempt to vote for increasing the $600 coronavirus stimulus checks for US citizens to $2,000, saying the proposal had no clear path to being adopted in the GOP-controlled Senate in the near future. The proposal passed a vote in the Democrat-controlled House, but this did not save Speaker Nancy Pelosi from the wrath of vandals either.

This violence is unacceptable. @SpeakerPelosi’s house in California is reportedly vandalized - we should all be outraged by these acts. pic.twitter.com/E4XhVWtcKx

Her San Francisco house was also vandalised a day earlier, on New Year's Eve. Unidentified perpetrators wrote the words "cancel rent" and "we want everything" on the door of her garage along with "$2K" crossed out in an apparent reference to the failed $2,000 stimulus checks plans. The unknown perpetrators also spilled a blood-like liquid in front of the door and placed what looked like a pig's head in the same place. Police have so far not mentioned identifying those responsible for either acts of vandalism.